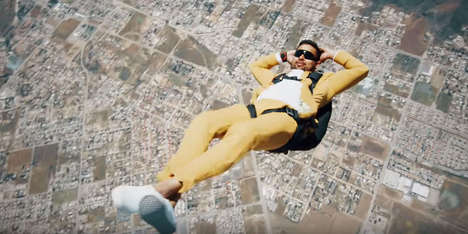 The runway was given an entirely new meaning after YouTuber Jesse Wellens tapped fashion designer Josh Kercher for a unique project — a sky diving fashion show that would be aired through Wix’s new web series ‘Up for Anything.’

The incredibly daring show featured numerous models, who had to undergo specialized sky diving training to pull off the stunt. Wearing the designer’s formal suits, six different models jumped from the plane and pulled their parachutes, eventually landing safely on the ground. This never-before seen stunt was first aired through Wix’s web series ‘Up for Anything,’ in which the website builder uses short-form videos to demonstrate the collaboration that’s possible through creating a site with this service.