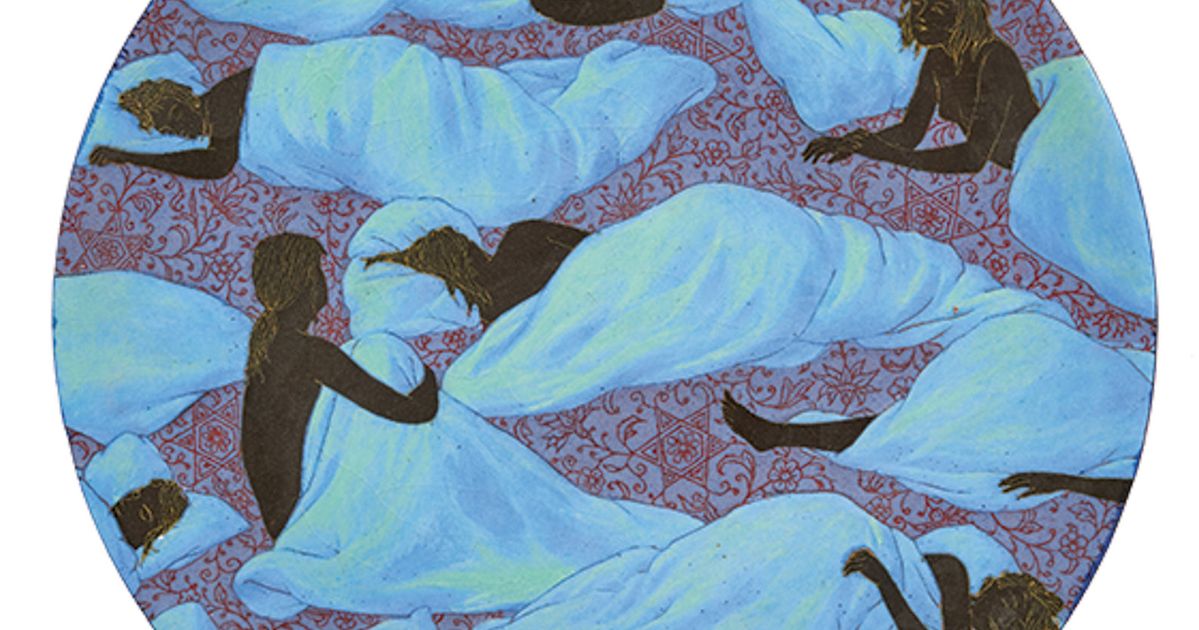 A plate by Grita Götze from her series Frauenruheraum (2017)
Photo: Klaus E. Göltz; © the artist

Under the Baroque plaster ceilings of the Schloss Köpenick, insects creep among luxuriant flowers and fruit, a woman may turn into a laurel bush, or fruit lying on a beautiful plate might reveal the decay that awaits all, whether human, animal or vegetable.Such images can be found among the ornate furnishings, metalwork and antique ceramics of the museum’s decorative arts collection, but also on works made in the last few decades by three German artists, bringing a modern sensibility to the ancient craft of intricate painted decoration on ceramics. The three artists are Heidi Manthey and her former students Grita Götze and Sonngard Marcks.The museum is housed in a 17th-century palace on a man-made island in the river Dahme on the outskirts of Berlin, and since 1963 has housed part of the State Decorative Arts Museum.

“We have a beautiful collection of ceramics by Heidi Manthey in our collection,” says Claudia Kanowski, the curator of the exhibition Flora, Fauna and Fable. “I wanted to show them in dialogue with works of Götze and Marcks, because the three artists are among the few to continue the tradition of figurative painting on ceramics.”The 80 works include loans from private collections and the studio collections of the three artists. They are makers of ceramics not interested in function. Kanowski, in her catalogue essay, writes: “A teapot can be a little sculpture on a plinth, a vase a statue and plates wall art.”

Manthey’s work—which often draws on Greek legend—includes delicate blue-and-white pieces that under the surface prettiness represent the contorted forms such as Actaeon becoming the stag torn apart by his own hounds. Both Götze and Marcks apply rich decoration to simple shapes like platters, as seen in Götze’s Frauenruheraum series, where near-abstract patterns resolve into the sinuous forms of sleeping women.Kanowski says the setting for the pieces is an important part of the exhibition. “The presentation is integrated into the permanent exhibition—on three floors of Schloss Köpenick, with beautiful furniture and interior decoration from Renaissance to Rococo—so that there will be lovely interactions between historical ornaments and contemporary ceramics.”• Flora, Fauna and Fable. Painting on Ceramics: Grita Götze, Heidi Manthey, Sonngard Marcks, Schloss Köpenick, Berlin, 24 April-3 October

Senior curator and human resources director resign from MOCA in Los Angeles
Some New York museums will ramp up to 50% visitor capacity next week under relaxed limits announced by governor
To Top
error: Content is protected !!
Top