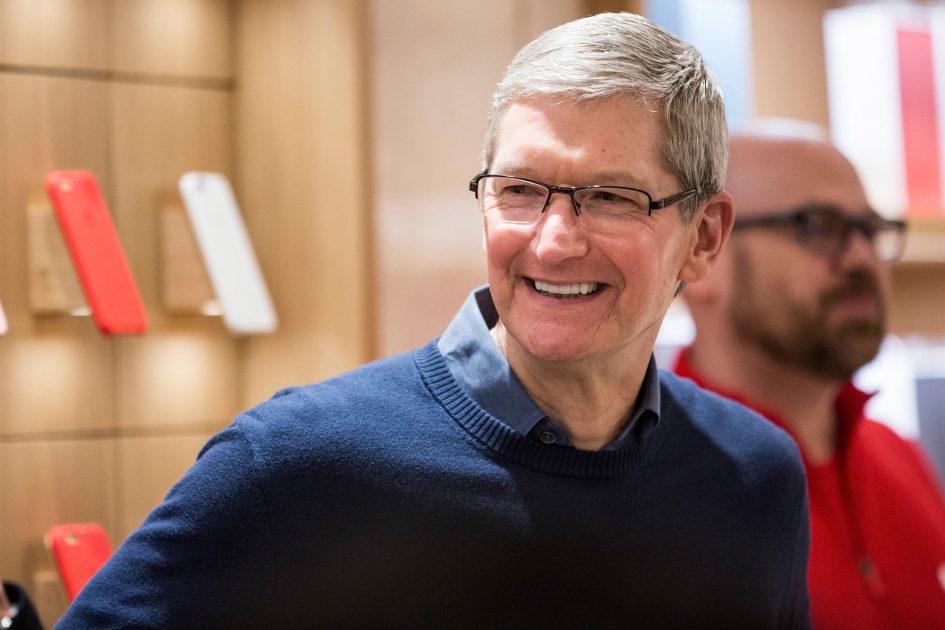 When Apple reports second-quarter earnings on Tuesday after the bell, sales will be down from the same time last year. That’s according to Apple’s own guidance.

Apple has been pummeled in the headlines all year. On January 2, Apple said that its critical holiday quarter revenue would be $7 billion short of its previous projection because iPhone sales had taken a beating in China.

Since then, Apple has made the rare move of cancelling a previously announced announced product, held a strange invite-only event at its campus without any new hardware products and missing critical details on the products it did announce, and most recently, settled a legal war with Qualcomm and paid it a one-time amount analysts believe to be in the billions.

Yet Apple stock keeps going up.

Since Apple pre-announced disappointing first-quarter earnings with shrinking revenue on an annual basis, the stock up over 43%, and last week, several Wall Street analysts covering Apple even upgraded their price targets for the stock.

“There’s nothing good you can say about fact that they stopped reporting unit sales,” D.A. Davidson analyst Tom Forte said.

“Looking at our model and our projections for iPhone sales, as it pertains to the March quarter, we’re not looking for anything magical on iPhone or on China,” Forte said.

Here’s what Wall Street is expecting for the quarter, according to Refinitiv consensus estimates:

But Apple’s rising stock suggests that the market is finally digesting what the company has been broadcasting for years: Apple is changing its story — it’s not the iPhone company anymore, even though that single product accounts for over 60% of Apple’s sales. Instead, Apple sells a slew of online services with recurring billing, so Apple deserves to be priced more like Amazon, Google, or Facebook.

That’s the message Apple tried to send with its March event, which was studded with celebrities and lofty language about the power of creativity, but did not include a new hardware product nor pricing or release dates for most of what it talked about.

By announcing three new online subscription services and a co-branded credit card with Goldman Sachs, Apple underscored just how many new revenue streams it could launch. Only one of the products, Apple News+, was available for consumers after the event.

Forte called the event “strange” but said that it helped investors start to “think about life after iPhone.”

“Investors have bought hook-line-and-sinker into the notion that services revenue is going to be a fast growing number for Apple,” he said.

“In our view, investors still don’t fully appreciate the strength of Apple’s platform with iOS users more engaged with mobile services and spending 10x Android users on mobile apps,” Morgan Stanley analyst Katy Huberty wrote in an April note, pointing out that Apple has doubled the number of paid online services this year.

It’s possible that Apple will provide some details to investors and analysts on Tuesday about how well Apple News+ is performing, even if it doesn’t show up on Apple’s balance sheet, as well as other data points to underscore that its services business is growing quickly. The only data point on the $10 per month service so far is that 200,000 people signed up in the first 48 hours it was available.

A year ago, Apple reported $9.19 billion in services revenue, which includes subscriptions, fees from its App Store distribution platform, AppleCare warranties, and money from an agreement with Google to make Google the default search engine on the iPhone’s browser.

Analysts and investors are also looking to see if Apple says how much it plans to spend on capital return. It’s that time of year.

Last April, Apple announced that it would spend $100 billion on dividends and buybacks over the next year, partially driven by tax reform passed in December 2017.

It also said that it wanted to become “net cash neutral over time,” which means that it intends to spend all of the cash and marketable securities on its balance sheet.

Forte says that Apple’s capital return announcement “derisks” the quarter in case of a miss.

Morgan Stanley expects Apple to announce a 10% dividend raise and at least a $50 billion increase into the authorized buyback fund.

“We continue to forecast Apple repurchasing $15-20 billion in shares each quarter through fiscal 2021, which will reduce total diluted shares outstanding by mid-to-high single digit percent annually and add more than $1.00 to EPS in fiscal 2020,” Huberty wrote.

Apple is buying back so much stock it might not even mind a slightly lower share price.

“The company doesn’t mind if their shares aren’t on fire, because then they can buy them back more cheaply,” Forte said. “Apple would love to have the stock go straight up, but they’re okay with that not being the case.”