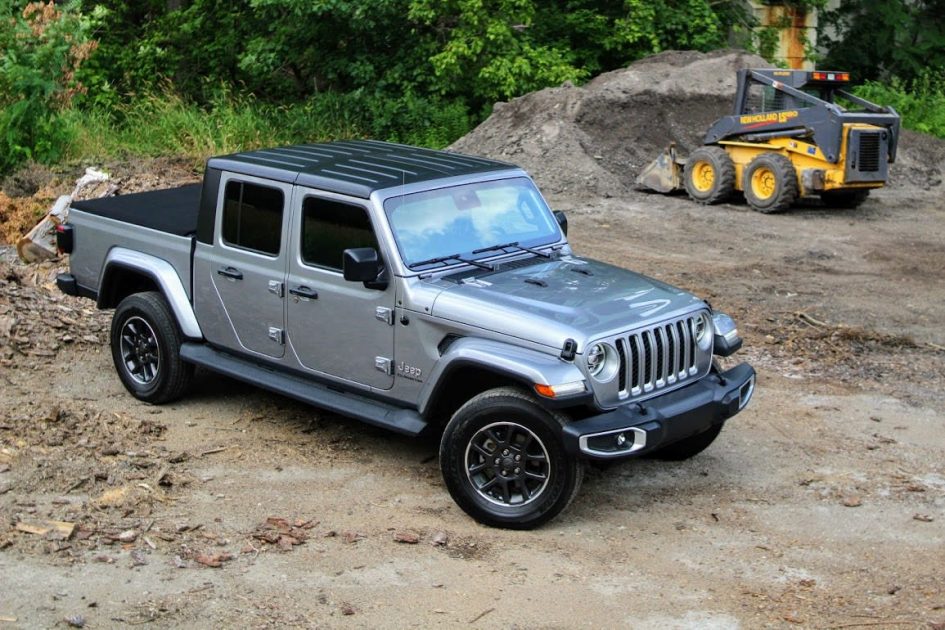 The 2019 Jeep GladiatorMack Hogan | CNBCWhen Fiat and Chrysler merged to create Fiat Chrysler, it looked as though the company would use Fiat’s small-car know-how to create a leaner, more efficient lineup better suited for the post-recession era.But that’s not exactly how it went. It turns out that, when gas stays cheap, Americans trend toward bigger and bigger vehicles. The Fiat brand has struggled, recently canceling its iconic 500 hatchback, while Chrysler’s legacy Ram and Jeep truck lines become even more important profit centers for the company.So with trucks selling at unbelievable rates and the Jeep Wrangler enjoying a sales boom, it’s not shocking to see the return of the Jeep pickup truck. Dubbed the Gladiator, Jeep’s Wrangler pickup is extremely cool, smartly designed and incredibly capable. It feels more modern and well-executed than anything else in the segment, but the best midsize truck is also the most expensive one.The 2019 Jeep GladiatorMack Hogan | CNBCThe goodMidsize trucks were one of the segments that suffered the most in the financial crisis. While full-size workhorse trucks like the Ford F-150 were too big to fail, sales of the Ford Ranger and Chevy Colorado crashed hard during the recession and never fully recovered before the models were canceled. Now, the Ranger and Colorado are back, but they’re older designs than the all-new Gladiator.That’s evident as soon as you sit in a Gladiator. Even without all of the options, the materials, quality and design of the Gladiator feel a step and a half ahead of Ford or Chevy. And compared to older trucks like the Toyota Tacoma and Nissan Frontier, the Gladiator is practically a Bentley.It also benefits from being Jeep’s only truck. Sure, Ford will sell you a Ranger, but the blue oval reserves its top-tier tech and interior trimmings for its more lucrative, full-size F-150. Jeep will let you go nuts with options, so prices deep into the $50,000-range are easy to encounter. Our decently equipped Gladiator Overland tester, for instance, was $53,045.The 2019 Jeep GladiatorMack Hogan | CNBCTo justify that price, our tester had adaptive cruise control, a removable hardtop, blind-spot monitoring, an Alpine premium sound system and an 8.4-inch touch screen with Fiat Chrysler’s fantastic Uconnect infotainment software.On-road performance is also impressive. It handles corners well, with more direct and predictable steering than Jeeps of years past. The ride is significantly better than the Wrangler as well, likely due to the increased wheelbase of the truck. It’s also pretty quiet, though a fixed-top pickup from Ford or Chevy will probably still be more hushed on the freeway.Jeep also offers some class-leading capabilities. Properly equipped, the Gladiator will tow 7,650 pounds and haul 1,700 pounds in its bed. That bests any other crew-cab 4×4 midsize truck, though we should note that a diesel Chevy Colorado will best Jeep’s towing figure if you opt for the smaller cab and two-wheel drive.The 2019 Jeep GladiatorMack Hogan | CNBCIt’s also a Jeep, which means you can expect serious off-road capabilities. Opt for the Rubicon model and you’ll get disconnecting sway bars, differential lockers and protective rock rails to help handle sticky situations.Most importantly, the Gladiator is a truck-ified Wrangler. That means you can take the doors off, drop the top and cruise around in what is — to most people — one of the coolest vehicles in the world.Parked next to a $171,000 Acura we also had on test that week, most people passing by my house looked straight past the supercar and said, “oh cool, the Jeep truck!” or commented on its lack of doors. In the world of cool cars available for around $50,000, this is up there with the Tesla Model 3 and Ford Mustang Bullitt.The 2019 Jeep GladiatorMack Hogan | CNBCThe badEveryone may think it’s cool, but they’ll also be shocked when you tell them that you laid out $50,000 for a Jeep. Fully equipped, your midsize truck can top $60,000. That’s a ton of money for the segment.A lot of that outlay will hopefully come back on the other end of the ownership period, as Jeeps enjoy tremendously high resale values. Still, it’s far from the budget option.Our $53,045 Overland tester, for instance, still had manually adjustable cloth seats. The last Ford Ranger we tested was $40,685 and had leather seats with power adjustment, though it was a smaller SuperCab model. We thought the Ranger was expensive, but Jeep’s clearly taken it further. You’re paying more for capability and style than for equipment.The 2019 Jeep GladiatorMack Hogan | CNBCAnd as with most trucks in this segment, you’re not going to get the refinement of a unibody crossover like Ford Explorer or Honda CR-V. The Gladiator is a truck and still mostly feels like one, with some business in the ride on the freeway and a suspension that leans into corners more than you might expect.Final thoughtsIf you’re looking to get the most equipment or refinement for your dollar, the Jeep Gladiator isn’t the vehicle for you. You’d be better served by the unibody Honda Ridgeline or by not getting a truck at all.But if you’re willing to pay up for the coolest, most fun midsize truck, you can’t beat the Jeep. Everyone wanted to ride in it. Pictures were taken. Thumbs up were given. It made people smile. More than the Ford Raptor, more than any Ram, more than any other truck we’ve tested, the Jeep got attention and affection everywhere we took it.Sure, they were surprised when they heard how much it costs. Most people scoffed. But without fail, everyone who rode in it had the same reaction. Price no longer mattered. Everyone wanted one.The 2019 Jeep GladiatorMack Hogan | CNBCRating:Exterior: 5Interior: 4Driving Experience: 3Value: 2Overall: 3.5Price as tested: $40,685*Ratings out of 5.