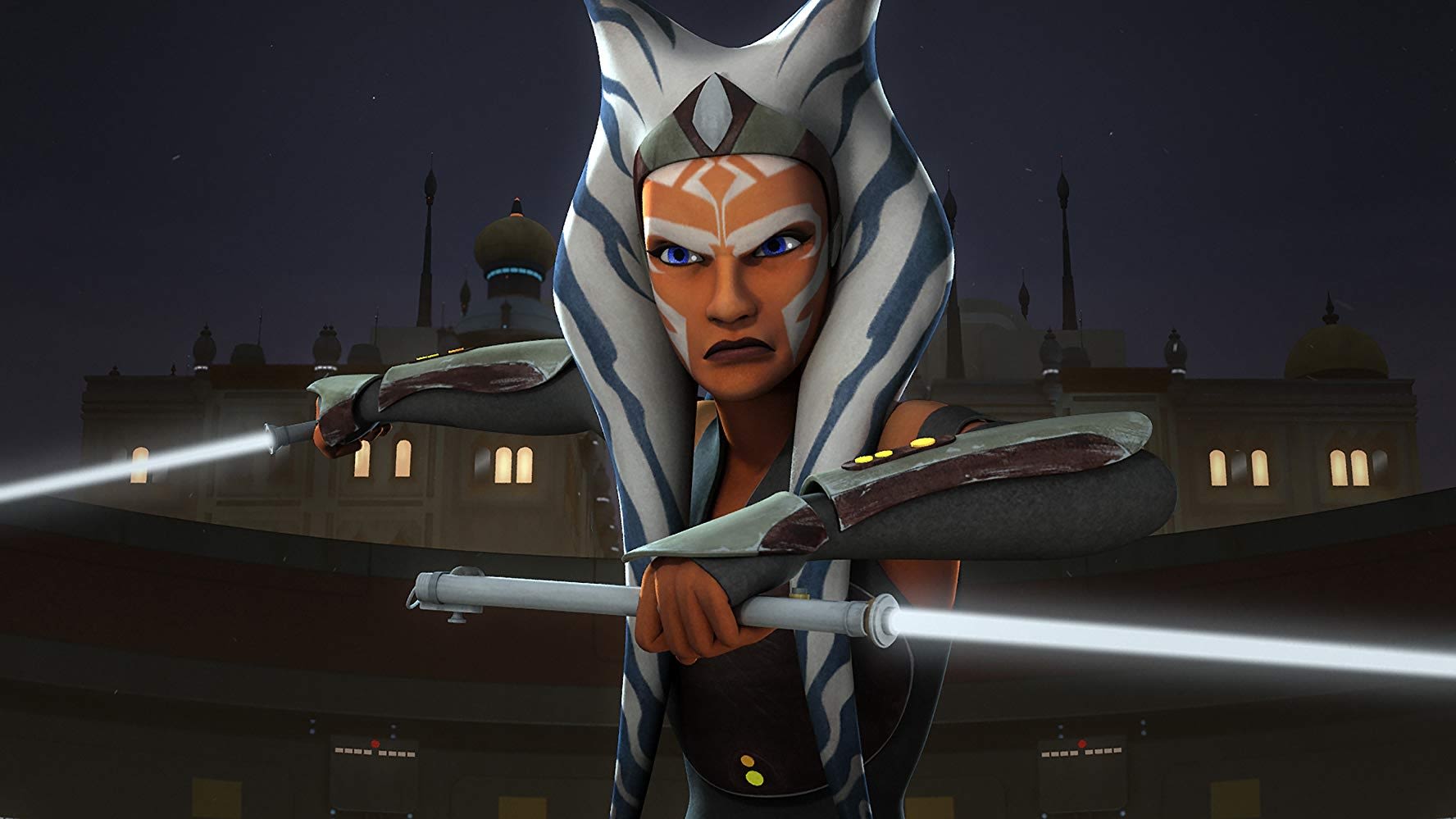 Dark side, beware. One of the hottest “Star Wars” collectibles is a strong-willed, dual lightsaber-wielding Jedi named Ahsoka Tano.

The character, voiced by Ashley Eckstein, has become a fan favorite since her debut in 2008 and is a highly sought after collectible. From toys and statuettes to clothing and accessories, Ahsoka is in high demand with consumers and when her products become available, they quickly sell out.

A Togruta female, Ahsoka was the first female Jedi to be categorized as a main character in the “Star Wars” universe. For those that don’t recognize the orange-skinned alien with large montrals and head tails, and white facial pigment, Ahsoka was the Padawan of Anakin Skywalker and hero of “The Clone Wars,” an animated “Star Wars” show.

Ahsoka grew from a headstrong student into a mature leader, although her destiny ultimately led to her leaving the Jedi order and forging her own path.

“[Dave Filoni’s] scripts are really good and he really embraced the Ahsoka character,” Dev Gilmore, director of design and development at from Diamond Select Toys, said. “I mean, when you talk about all the people he placed her with — Yoda and Anakin and later with Darth Vader — that’s a pretty incredible journey. And ‘Star Wars’ is so much about a journey. She’s a character that we can all grow up with and that’s exactly why fans have responded so well to her.”

Throughout the course of “Clone Wars” and later with “Star Wars Rebels,” a series that takes place after Anakin Skywalker has become Darth Vader, Ahsoka faces off against some of “Star Wars'” most vile villains — General Grievous, Darth Maul and Boba Fett — and teams up with some of the most beloved heroes — Obi-Wan Kenobi, Plo Koon and Padme Amidala.

Ahsoka became a favorite character among Diamond Select’s employees and so, they decided to create their own version of the character.

The company designed a stylized iteration of Ahsoka late last year, reducing some of her features to be more human-like and altering her proportions so that her appearance looked more realistic, as if she appeared in a “Star Wars” live-action film.

“We put it up on our website not really expecting an incredible response,” Gilmore said. “We just thought ‘Well, we like this character. This character is cool to us,’ and most of what we make we make it because it’s cool to us. We sold out of 750 pieces within one hour and we had no idea that was going to happen.”

Gilmore’s company specializes in limited collectibles, so they couldn’t just make more of the bust and sell them, although he said the company could have easily sold through another 750 pieces.

“She is one of the most asked for characters that I think I’ve had in years,” Gilmore said. “Which is substantial.”

The bust has appeared on secondary market sites for hundreds of dollars more than its original sales price. And Diamond Select is by no means the only company to see this type of fervor for the character.

An Ahsoka figure created by Kotobukiya retailed for around $50 and can now be found on secondary markets like eBay for close to $200. Star Wars Celebration exclusive enamel pins are on sale for upwards of $75, although it’s unclear if anyone has paid that much.

Even publications based on the character are hot items. A young adult novel called “Ahsoka,” written by E.K. Johnson and published by Disney Publishing, skyrocketed to the number one spot on the New York Time’s Bestseller’s list for young adult hardcovers shortly after its release in 2016.

“There is this misconception that the original trilogy is the end-all, be-all for ‘Star Wars’ fans,” Cameron Deuel, senior manager of social at Funko, said. “But there are a lot of entry points that get overlooked.”

He said there are whole generations of fans that were introduced to “Star Wars” through “The Clone Wars” animated television series and its sequel series “Rebels,” both of which feature Ahsoka Tano prominently.

Over the years, Funko has created four different Funko Pops based on the character as well as a plush toy, a stylized bobble head and a T-shirt.

“For a lot of fans, Ahsoka is so powerful because she is more than just one thing,” Deuel said. “She’s not just a Jedi or just a bounty hunter, like a lot of other characters get put into buckets really easily.”

Ahsoka is a foil for Anakin Skywalker. Both face difficult moments in their lives that make them question the world they live in. While Anakin turns his back on the Jedi, murdering many of them before turning to the dark side, Ahsoka leaves the Jedi Order peacefully, choosing to forge her own path.

“She’s young and she’s curious and she grows into a very powerful warrior,” Deuel said.

Ahsoka also has the benefit of being voiced by Ashley Eckstein, who is an avid fan of “Star Wars” herself and an advocate for delivering not only good content, but good products to other fans. In 2010, she founded Her Universe, a clothing company that has since turned into a fashion and lifestyle brand. It was purchased by Hot Topic in 2016, but Eckstein remains on as the head of the company, overseeing all aspects of the business.

“She’s very passionate about making sure that we focus on the fan as much as we do on the license itself,” Deuel said. “Anytime I see her walking around the floor [of a convention] or talking to people she will remember names, she’ll remember people.”﻿

Clothing can be just as big of a collectible as toys, busts and art for fans of “Star Wars.” Her Universe was a trailblazer for allowing fans to “wear their fandom” without having to cosplay as a character.

The brand has expanded beyond “Star Wars” to other licenses like Marvel, DC, Studio Ghibli and a number of Disney animated films, but always with a fashionable flair, taking inspiration from the characters fans love most.

“Ahsoka has become equally as popular with both men and women and it’s incredible to see how her story has resonated with all ‘Star Wars’ fans,” Eckstein said.

During Star Wars Celebration in Chicago last month, the top-selling item was a unisex Ahsoka Tano T-shirt designed by Lucasfilm’s Daniel Kennedy. Additionally, an Ahsoka-inspired windbreaker is now sold out on the Her Universe website.

“Anything we make for Ahsoka continues to be a top seller for us,” Eckstein said.

Eckstein will reprise her role as Ahsoka in the upcoming seventh season of “Clone Wars,” which Disney resurrected to bring to its upcoming streaming service Disney+. The last episode of the show was in March 2014, before Disney launched “Rebels,” which takes place years later, later that year.

Fans have been eagerly awaiting the return of Ahsoka and to see how several loose ends from “Clone Wars” get tied up before the events of “Rebels.” The show likely won’t air on the service until 2020.

Investors monitor earnings, US jobs data
We went inside Tesla’s Gigafactory. Here’s what it looked like
To Top
error: Content is protected !!
Top