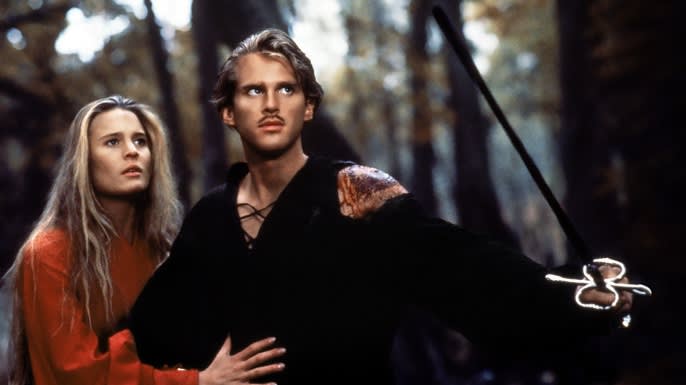 Cary Elwes and Robin Wright star in “The Princess Bride.”20th Century FoxFans of “The Princess Bride” are screaming “Inconceivable!” after the CEO of Sony Pictures Entertainment said pitches had been made by “very famous people” to remake the beloved 1987 film.”We have so many people coming to us saying, ‘We want to remake this show or that show,'” Tony Vinciquerra said in a published interview with Variety. “Very famous people whose names I won’t use, but they want to redo ‘The Princess Bride.'”And while it seems like the studio has no plans to remake the iconic feature, even the suggestion that it could was enough to send fans into an uproar, including its cast.”There’s a shortage of perfect movies in this world,” Cary Elwes, who plays the film’s hero, Westley, wrote in a tweet. “It would be a pity to damage this one.”The statement was a play on one of his character’s many quotable lines to Princess Buttercup in the film. Singer Cher, too, tweeted a similar comment on Tuesday night: “There’s a shortage of perfect films in this world. It would be a pity to damage yours.”In an era where Hollywood has become reliant on massive franchise films and retelling popular stories from the last few decades, it’s no surprise that a film as sentimental to moviegoers as “The Princess Bride” would be rumored to be revisited.However, the resounding discontent online suggests that this is one film that would likely never be remade — or if it were, it would not be successful at the box office.Recent remakes and spinoffs of past films including “Men in Black: International,” “Ghostbusters,” “Godzilla,” “Robocop” and “The Mummy” have failed to inspire audiences to go to movie theaters.While there are some popular updated versions of older films, such as “A Star is Born,” “Aladdin,” “The Lion King” and 2018’s “Halloween,” the vast majority are not considered an improvement on the original.Here’s how some fans expressed their outrage on Twitter:Disclosure: Comcast is the parent company of NBCUniversal and CNBC. “The Mummy” and “Halloween” were NBCUniversal productions.