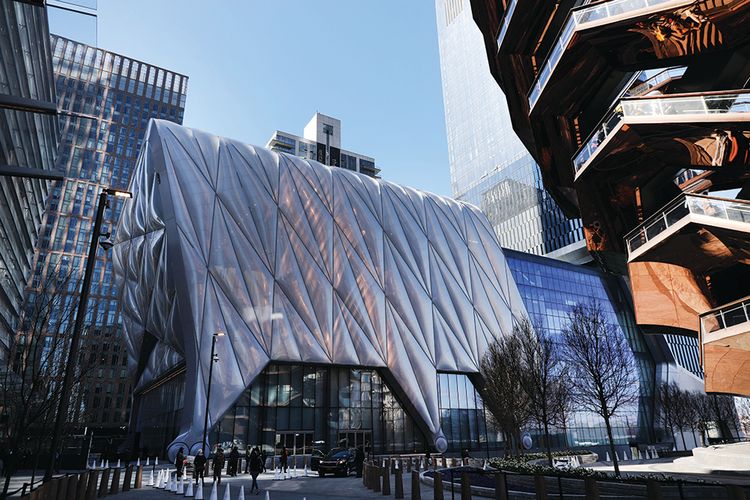 
Build it and they will come. That must have been the organising principle behind Hudson Yards, a disharmonious $25bn archipelago of colossal high-rises that loom over the High Line like monstrous gun towers defending plutocrat tenants from contamination by New York’s lifeblood—its streets.

On its opening weekend, people hungry for anything new did come, by the thousands, to browse shops in the luxury, indoor mall or to gape at Thomas Heatherwick’s shiny, 16-storey, chocolate-brown scaffold, Vessel. Many people actually like this “sculpture”, a public art disaster so ill-suited to its densely plotted site that it dooms what could have been landscaped social space.

Some also came to explore the Shed, an eight-storey, 200,000 sq. ft hold-out for cultural capital paid for with $475m of public and private money. Designed by Diller, Scofidio + Renfro (architects of the High Line), with the Rockwell Group, the building’s quilted, Teflon-like carapace can roll over its adjoining structure, opening the 17,000 sq. ft McCourt, the Shed’s largest space, to performances on the outdoor plaza in warmer months. Unfortunately, that will also expose audiences to the scene-stealing Vessel.

Under the artistic director and chief executive Alex Poots, the Shed aims to set itself apart by only presenting and developing original commissions. That is a noble and healthy mission. On paper it looks great; in practice it puts an institution that wants to be both experimental and popular in conflict with itself. In time, its programmes should deliver, if not epiphanies, at least a sense of discovery. To accomplish that, the Shed needs to generate heat—sex up the site—but we are not there yet.

Poots, a co-founder of the Manchester International Festival and more recently the artistic director of the Park Avenue Armory, is doing his utmost to attract diverse audiences, beginning with Soundtrack of America. The five-night series of concerts conceived by the artist and film-maker Steve McQueen, with Quincy Jones as chief adviser, drew deeply on the history of African American music’s “family tree”—from jazz, gospel, soul and funk to rock, house, electronica and rap—to show its continuing influence on younger generations.

At the premiere, rousing, affecting performances by Jon Batiste, Rapsody, Sheléa, Victory, and more barely registered with the nearly all-white audience. It seemed strange that a heritage concert did not attract a broader racial mix—or cause the crowd’s feet to move. Mostly, people stood still and listened. Perhaps it was the high degree of professionalism on view, the lack of tension that rough edges can produce.

The Shed’s visual art presentations struck the same respectful note, rather than spark the irreverence the arts centre needs most to succeed in a city that already boasts major non-profit theatres, museums and galleries. The “immersive” Richter Reich Pärt (until 2 June) was both elegiac and embarrassing. Though listed as a collaboration between Gerhard Richter and composers Steve Reich and Arvo Pärt, it is not clear how much Richter actually participated, even if his studio did.

How open to risk can an institution funded by vast sums of money be?

The performance takes place in a voluminous gallery where wallpaper digitally printed with Rorschach-style imagery based on a Richter painting is installed in floor-to-ceiling strips that suggest patterned Band-aids. A streetwear-clad chorus mingles with the audience, singing a beautiful Pärt composition that was initially performed in Manchester, and apparently written in response to a different, more sombre group of Richter paintings. How such an institution could sell itself as an exhibition venue on the name of a major painter without including a single original work by him does not bode well.

Failure, however, is part of the DNA of the shape-shifting Shed, which the architect Elizabeth Diller has described as a work in progress, a laboratory of neutral, flexible spaces where artists can test ideas in front of live audiences. For them, the freedom to work unrestricted by architecture or budget is a gift, and work in development needs a safe place to fail.

But how open to risk can an institution financed by vast sums of money be? We are far from the days when artists tried out new ideas in raw lofts, dive bars and storefronts before audiences of their peers instead of “influencers” sipping “curated” cocktails. The old avant-garde had little to lose; there was always another space. Now, it is hard to come by.

Does New York need this?

And so we must welcome the Shed, which comes out of the gate facing stiff competition from Lincoln Center, the Brooklyn Academy of Music and the Park Avenue Armory, to say nothing of New York’s existing theatres, arenas, galleries and museums. Could the money it cost not have been better invested though in shoring up the city’s non-profits, and providing subsidised rehearsal space and studios? It seems mad to spend half a billion dollars on an arts venue in a place already groaning with the weight of world-class institutions that produce and import all manner of live and plastic arts programmes, but struggle to stay afloat. In other words, New York did not really need the Shed; Hudson Yards did.

The Hudson Yards developer, Stephen Ross, needed a culture centre to secure $6bn in tax breaks from the city. (Not to mention the $1.2bn in foreign investment meant for “distressed” urban neighbourhoods, through the controversial EB-5 visa programme.) The names of private citizens backing the Shed are all over the lobby of its Bloomberg Building, as if to remind tax-paying audiences who really owns their culture.

It is too early to judge how deep a connection the Shed will make with New Yorkers, although we should give Poots credit for taking it on a flying leap into what, for now, is a vortex of possibility. If only he had not packed a parachute, there might be more reason to celebrate than shrug.