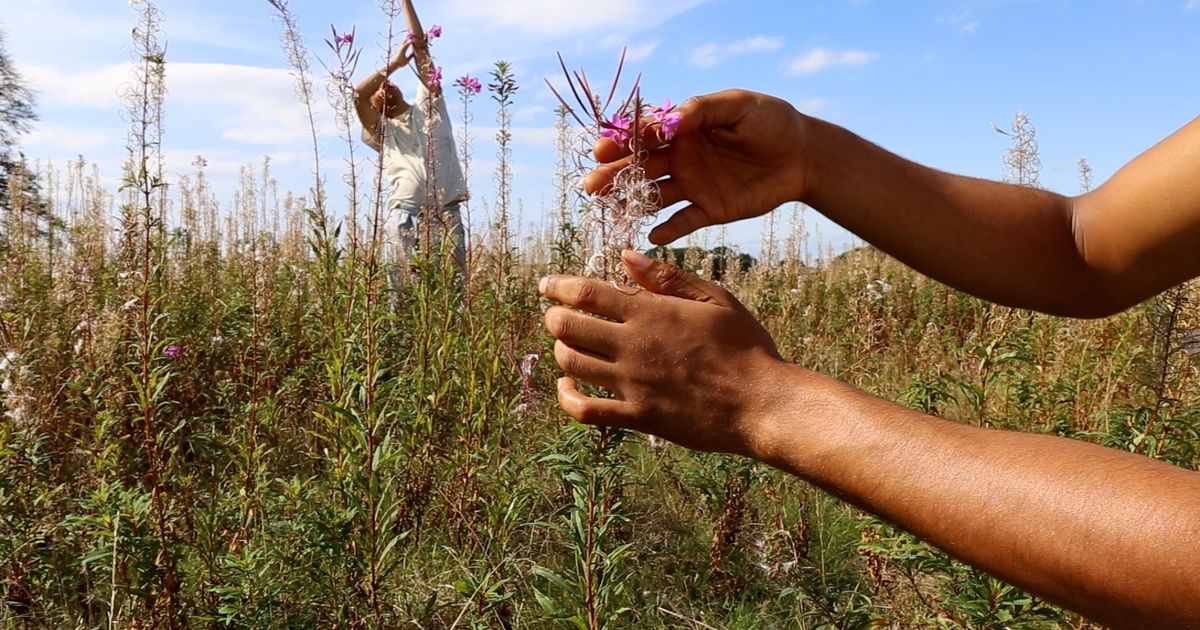 Still from Adham Faramawy’s The Air is Various, Subtle and Sweet (2020)
Courtesy of the artist and Niru Ratnam

Adham Faramawy: ‘The Air is Subtle, Various and Sweet’Until 2 October, Niru Ratnam, 23 Ganton St, W1F 9BWGrief can be an effective taskmaster, as demonstrated by Adham Faramawy’s 2021 Jarman Award-nominated film ‘The Air is Subtle, Various and Sweet’ (2020)—a highly personal reflection on the artist’s heritage and identity, made within three months of their father’s death in June 2020. Faramawy, who was born in Dubai and raised in England, narrates the 35-minute-long work that moves between an expansive former marshland near their flat in Newham, East London, and Egypt, the home country of the artist’s parents. Two dancers, nymph-like among the marsh’s tall grasses and magenta thistle, execute a fluid choreography as Faramawy reveals the historical medicinal properties of non-indigenous plants in the area and how they came to grow in London. Plants exist not just in the work, but around it too, sprouting up around the film screen amid heaps of soil studded with rubbish. Their parallels to humans are questioned routinely and open-endedly: what does it mean to call something an “invasive species”, or think of it as “native”. Can plants, like humans, be “naturalised” to a country or a place?As the film moves to Egypt, its focus shifts from questions of dislocation to those of the hyperlocal. In one section, filmed in 2018, the artist’s father, Saeed, takes the viewer on a tour of the village in which he grew up and still lives. Virtually everyone he passes by is a close contact; so ingrained is he to this village that drawings he graffitied on a public wall as a child remain intact decades later. What does it mean to belong to a place so deeply it subsumes your life, memories, perhaps your very being? Faramawy’s work implies that heritage cannot be the sole factor that defines identity. By its conclusion, the film feels less like a celebration of one’s origins than an acceptance of where one cannot return to. Humans, like plants, can grow and even thrive in the strangest of places.

Abbas Akhavan: Curtain Call, Variations on a FollyUntil 17 October, Chisenhale Gallery, 64 Chisenhale Rd, E3 5QZIn a room filled with the sound of a low pulsing hum, a tall, dark brown colonnade stands in partial ruin, placed upon a green screen. Upon closer inspection, the pillars appear to be made from straw and tightly packed mud. It seems as though a film crew is just out of sight. The more archaeologically informed might quickly recognise that this structure closely resembles a two-millennia-old arch in Palmyra that was destroyed by Isis in 2015 (the exhibition’s text informs us of as much too). One might also recall its well-documented quasi-reconstruction: a 3D facsimile of the arch, two-thirds the size of the original, was created by a team of scientists at Oxford University and unveiled in London by Boris Johnson in 2016. Termed a “show of solidarity”, it invited and eluded in equal measure the debate around the historic power structures that led to the monument’s very ruination. With Abbas Akhavan’s show eerily timed with the fall of Kabul to the Taliban, this dense, poetic work reminds us that the destruction of cultural heritage is as cyclical as it is tragic.

Phyllida BarlowUntil 18 September, Hauser & Wirth, 23 Savile Row, W1F 9BWThe centrepiece of Phyllida Barlow’s new London exhibition, a towering 2014 sculpture untitled:postcorral, dominates Hauser and Wirth’s vast North Gallery, but in a characteristically un-monumental fashion. It consists of crudely painted triangular wooden poles weighted down by lumpen cement bases, closely arranged in a lopsided circle that reaches almost to the room’s edges. In Barlow’s typical style, the work forces you to navigate the space awkwardly, skirting around the narrow gap between the sculpture’s perimeter and the gallery’s walls, all while peering in to the large open space you are denied access to. Forced to experience something so big up-close leaves one feeling less awestruck than mildly inconvenienced, revealing the surprisingly absurd and tender reactions that a 20-ft-high sculpture can elicit. A series of 12 brightly coloured drawings—slightly too abstract to term preliminary studies for the sculpture—hang in a neighbouring room, indicative of the playful curiosity that best defines Barlow’s long, prolific career.