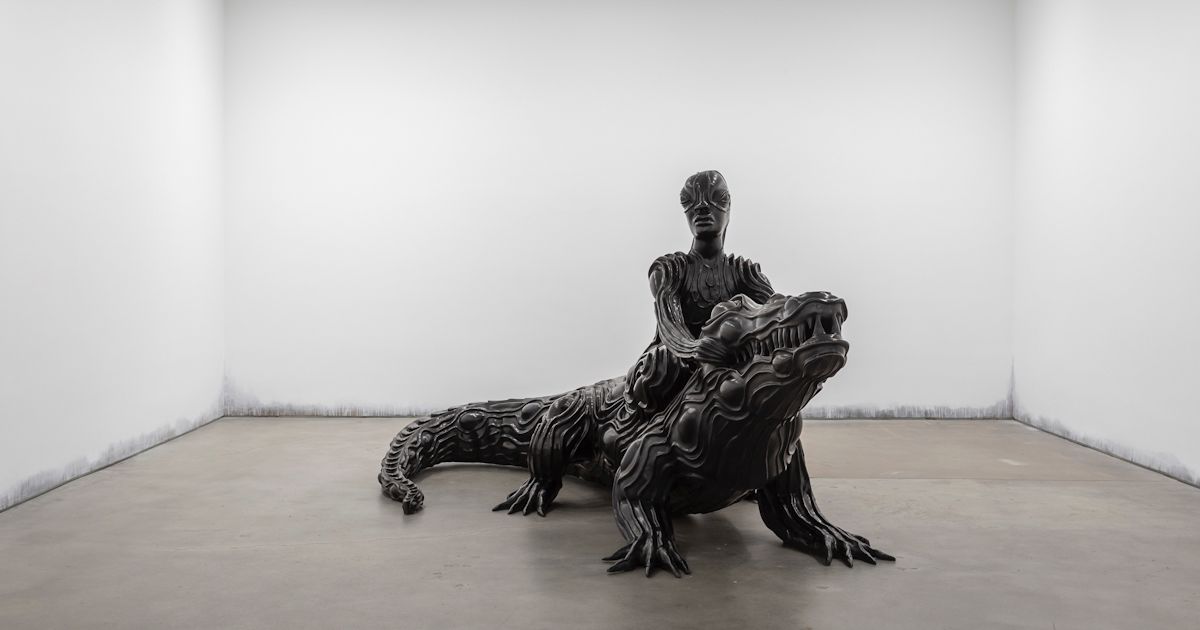 Wangechi MutuUntil 25 June at Gladstone Gallery, 515 West 24th Street, ManhattanThe Kenyan-American artist Wangechi Mutu, the artist behind the Metropolitan Museum of Art’s inaugural façade commission, presents a series of engrossing bronze sculptures that are both graceful and phantasmagoric, comprising hybrid goddess figures and menacing sharp-toothed reptiles and animals. The large-scale works Crocodylus and MamaRay (both 2020)—the first two pieces viewers encounter in the gallery—are fantastical anthropomorphic beings that challenge Eurocentric aesthetics and also symbolise ideas around strength and balance and the gendered and racialised body. Viewers discover at the end of the exhibition that the creatures have laid bronze eggs and will proliferate, a reference to the “triumphant female goddess”, according to the gallery. The Legion of Honor in San Francisco is currently hosting an expansive exhibition devoted to the artist titled I Am Speaking: Are You Listening? (until 1 August).

Adriana Varejão: TalaveraUntil 26 June at Gagosian, 522 West 21st Street, ManhattanThe Brazilian artist Adriana Varejão is best-known for her oil and plaster “tile paintings” inspired by cracked azulejos, a Portuguese ceramic style with Arabic origins that is emblematic of colonialism in Brazil. In a collection of works made in the last three years, Varejão looks to talavera pottery for inspiration, the earthenware ceramic style prevalent in Mexico after Spanish colonisation, which hybrids Indigenous and European sources. Works like the painting Three Diamonds (2019) and the vibrant but sinister Ruína Brasilis (Brasilis Ruin) (2021)—a half-destroyed pillar with raw meat bursting from the structure—combines the two styles, commenting on the aesthetics and tension generated by cultural pluralism. The pieces symbolise the current and historical decay of government in Brazil, and generally of human life in the Anthropocene. Varejão will have a major retrospective exhibition at the Pinacoteca de São Paulo next year.

David Hammons: Day’s EndPermanent work at Hudson River Park on the Gansevoort Peninsula, ManhattanThe monumental public artwork Day’s End by David Hammons will be officially unveiled this weekend after seven years in development. The 325 ft-long sculpture made of brushed steel poles recreates the outline of a former warehouse that once stood at Pier 52, across from the Whitney Museum of American Art, which funded the project. Taking its name from an earlier work on the pier by the artist Gordon-Matta-Clark, who surreptitiously carved out sections of the abandoned building as an architectural intervention, the work is a ghostly memorial to the site’s artistic and social history. The work, which has no floor, ceilings or walls, is the “container of everything—the trees, the cityscape behind it, the water”, the Whitney’s director Adam Weinberg said in a previous interview. “It basically—in true David Hammons fashion—is the most democratic of all works, because it’s not about itself as much as it’s about everything else it captures.”

Three exhibitions to see in London this weekend
National Gallery of Art recruits the first woman and person of colour to serve as its chief curator
To Top
error: Content is protected !!
Top