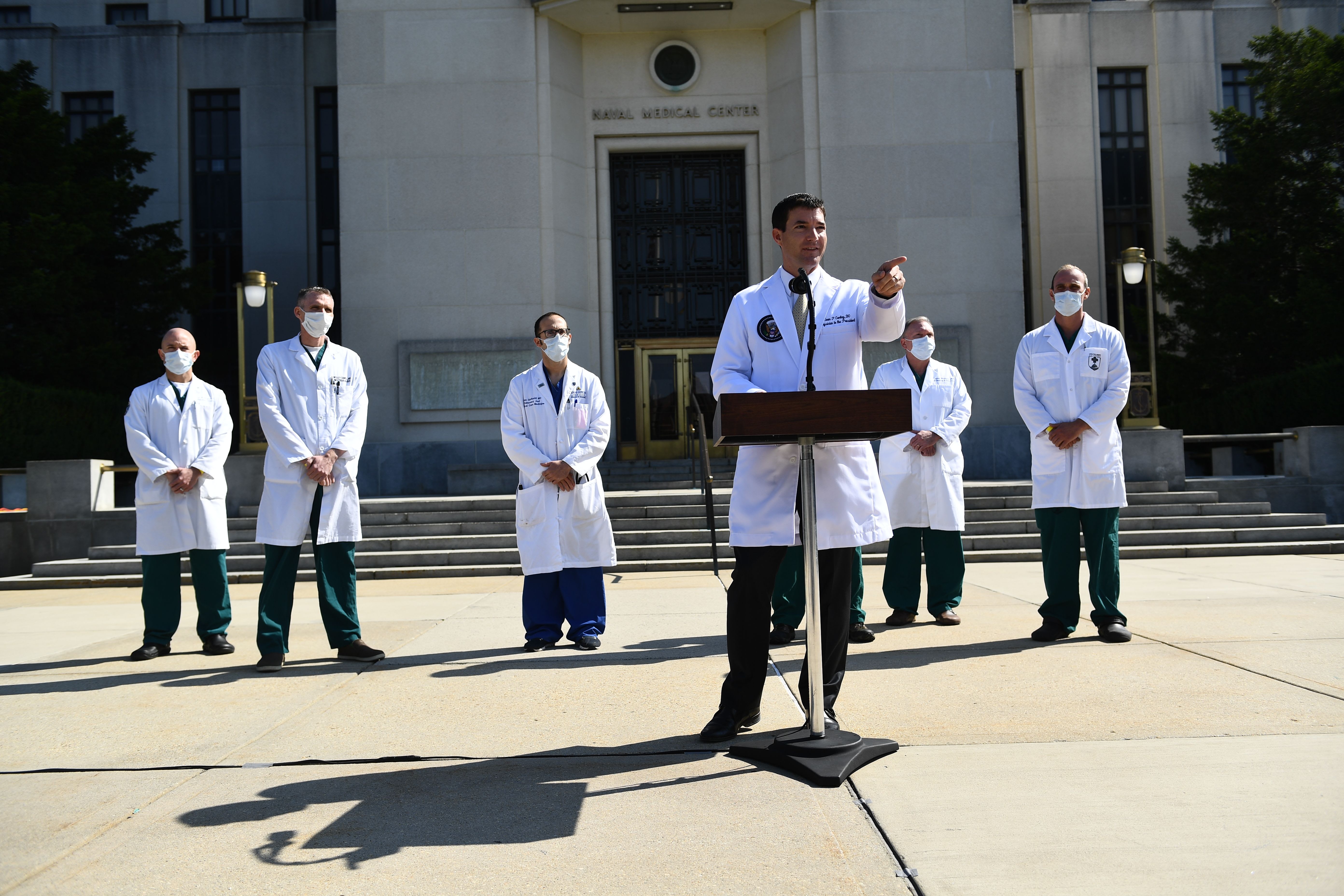 White House physician Sean Conley answers questions surrounded by other doctors, during an update on the condition of US President Donald Trump, on October 4, 2020, at Walter Reed Medical Center in Bethesda, Maryland.Brendan Smialowski | AFP | Getty ImagesPresident Donald Trump experienced two drops in his oxygen levels over the course of his coronavirus illness but has improved and may be discharged as soon as Monday, Trump’s physician, Dr. Sean Conley, said on Sunday. “The president has continued to improve,” Conley told reporters outside the Walter Reed National Military Medical Center, where Trump is being treated. “As with any illness, there are frequent ups and downs over the course.”However, the doctors disclosed that Trump had been administered a steroid that is usually given to patients with serious cases of Covid-19. This led several medical experts to express greater concerns about the president’s condition.”If they are going to discharge him tomorrow, that would mean he is virus negative. I don’t think that’s possible,” said Dr. Scott Gottlieb, former head of the Food and Drug Administration under Trump.The president’s doctors did not disclose the exact timing of Trump’s drop in oxygen levels or whether his lung scans showed damage from the disease. Conley said Trump was doing well Thursday night into Friday morning and was only experiencing mild symptoms with his blood oxygen levels in the high 90s. Conley said that by late Friday morning the president was running a high fever and his oxygen saturation levels had dipped below 94%. Healthy adults generally have blood oxygen levels of 95% or higher. “Given these developments, I was concerned for possible rapid progression of the illness,” Conley said. Trump was then given supplemental oxygen and “after about a minute” his levels were back above 95%. The president was on supplemental oxygen for about an hour Friday, Conley said. On Saturday, Trump’s oxygen saturation dipped to about 93%, the doctor said. It’s unclear if he was given oxygen on Saturday. The doctors monitored Trump and his oxygen levels went back up. The president’s blood oxygen level is currently at 98%, Conley said.Conley also said that the president has been administered dexamethasone, a steroid that treats inflammation in Covid-19 patients and has been shown to help patients with severe or critical illness. However, it is generally not used in mild or moderate Covid-19 cases. Trump also completed a second dose of remdesivir on Saturday. Still, doctors said Trump could be discharged as early as Monday to continue his treatment at the White House. The president has entered his third day in the hospital on Sunday after contracting the virus last week.Dr. Sean Dooley, a pulmonologist at Walter Reed, said the president has been without a fever since Friday morning with favorable vital signs and no shortness of breath or any other significant respiratory symptoms.The Sunday briefing comes a day after a presentation from the doctors that sowed confusion and concern over the president’s condition and raised new questions about when it was known that Trump was ill.  Trump’s team of doctors acknowledged on Sunday that they gave an overly positive description of the president’s condition on Saturday. “I didn’t want to give any information that might steer the course of illness in another direction, and in doing so, you know, it came off that we were trying to hide something, which wasn’t necessarily true,” Conley said.Skepticism about possible Monday dischargeGottlieb told CNBC’s Shepard Smith that he’s more concerned now about the president’s condition than he was before the Sunday briefing, citing the president’s dexamethasone treatment.”They threw the kitchen sink at POTUS. The care will help. But they saw signs he was decompensating,” Gottlieb said of the president. “The dexamethasone was a key disclosure. A lot of us were speculating that but to know that now is a key fact.”Gottlieb also noted that the president’s two drops in oxygen do not indicate a strong recovery and expressed concern that Trump’s medical team wouldn’t discuss his lung scans and viral load, among other things. The oxygen level drops indicate the president’s lungs have been affected by the disease, according to Gottlieb. “My biggest take away is the president’s team are offering minimal information and what is being offered appears to be conflicting,” Gottlieb said. “Our plan for today is to have him eat and drink, to be up out of bed as much as possible, to be mobile, and if he continues to look and feel as well as he does today our hope is that we can plan for a discharge as early as tomorrow to the White House where he can continue his treatment course,” said Dr. Brian Garibaldi, another member of the president’s medical team. The president released a video on Saturday evening saying he was starting to feel good and would be back soon, though he acknowledged the next few days will be the “real test” during ongoing treatment. Trump’s coronavirus diagnosis was announced just before 1 a.m. EST on Friday. It’s unclear when the president was infected with the virus.At least seven people who attended a Supreme Court nomination ceremony for Amy Coney Barrett in the White House Rose Garden on Sept. 29 have tested positive for Covid-19, including Trump and the first lady.– CNBC’s Shepard Smith contributed to this report.Disclosure: Scott Gottlieb is a CNBC contributor and is a member of the boards of Pfizer, genetic testing start-up Tempus and biotech company Illumina. Pfizer has a manufacturing agreement with Gilead for remdesivir. Gottlieb also serves as co-chair of Norwegian Cruise Line Holdings′ and Royal Caribbean’s “Healthy Sail Panel.”