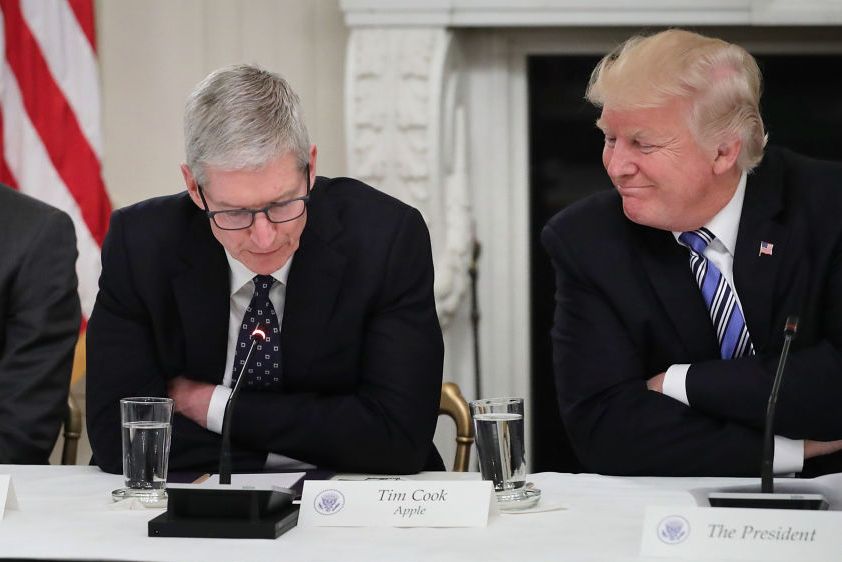 Apple CEO Tim Cook with U.S. President Donald Trump during a meeting of the American Technology Council on June 19, 2017.

President Donald Trump likes Apple CEO Tim Cook. But it’s not necessarily because he’s running a big and successful business. Rather, Trump said Cook calls him “whenever there is a problem”

“That’s why he’s a great executive,” Trump told reporters on Wednesday from outside the White House. “Because he calls me and others don’t.”

Last week, Cook joined Trump for dinner at the Trump National Golf Club in Bedminster, New Jersey. Their warm relationship stands in stark contrast to Trump’s position on other top executives, who he frequently antagonizes.

Cook may be willing to reach out because Apple has a lot at stake when it comes to policy decisions. The company does the majority of its final device assembly in China, putting products like the iPhone at risk when the Trump administration announces tariffs on Chinese imports. Trump has said he wants Apple to make its products in the U.S.

Apple’s iPhone was in line to get a 10% tariff starting Sept. 1, before Trump announced a temporary reprieve for laptops and cellphones, pushing the start date for the duties back to Dec. 15.

According to Trump, Cook recently argued that the 10% tariff would be unfair to Apple, especially compared to its primary competitor Samsung, which does most of its manufacturing in South Korea. Trump suggested on Wednesday that Cook directly influenced the administration’s decision to waive the tariff on cellphones and laptops.

“The problem was that Samsung, a competitor, his competitor, wouldn’t be paying tariffs, and Tim Cook would,” Trump said. “I gotta help him out short-term, because it’s a great American company.”

Apple didn’t immediately respond to a request for comment.

The recent skirmish over import duties is only the latest in a long string of efforts to keep Apple out of Trump’s trade war.

Apple also asked for duty waivers for parts for the Mac Pro in July. The Mac Pro is an expensive computer that was assembled in Texas, but there’s a new redesign launching later this year, which may be made in China, according to the Wall Street Journal.

Trump tweeted that Apple would not be getting any tariff waivers or relief for Mac Pro parts made in China.

When Cook was asked about the issue on Apple’s earnings call, he said he’d like to make the computer in the U.S., but also emphasized that Apple was in contact with the administration.

“We’re explaining that and hope for a positive outcome,” Cook said.

Less than a month after Trump was elected, he said that Cook called him following the victory to congratulate him.

Cook has criticized Trump for his environmental policies, his immigration policies, and his tepid response to the deadly white nationalist rally in Charlottesville, Virginia in 2017.

Cook has also poked fun at the president. After Trump mistakenly called the CEO “Tim Apple” in March, Cook changed his Twitter profile name to Tim followed by the iconic Apple logo.

Despite their differences, the lines of communication are open. As Trump said at the White House in July, “A man I have a lot of liking for and respect is Tim Cook, and we’ll work it out.”