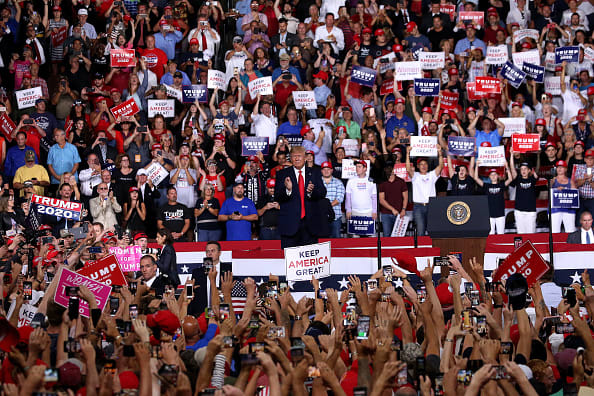 President Donald J. Trump’s crowd cheers at the first “Keep America Great” re-election campaign rally at SNHU Arena in Manchester, New Hampshire, on Aug. 15, 2019.Boston Globe | Boston Globe | Getty ImagesRecent polls reveal a downgrade in President Donald Trump’s job approval rating on the economy and show he’s trailing in head-to-head match-ups against the leading 2020 presidential election Democratic candidates, but a majority of U.S. business leaders believe, at least for now, that he will win reelection.More than two-thirds of North American chief financial officers surveyed by CNBC say Trump will win the 2020 election, while a quarter say former Vice President Joe Biden, according to the results of the latest CNBC Global CFO Council survey for the third quarter 2019.The CNBC Global CFO Council represents some of the largest public and private companies in the world, collectively managing more than $5 trillion in market value across a wide variety of sectors. The Q3 2019 survey was conducted between Aug. 21 and Sept. 3 among 62 global members of the council.This is the first time the quarterly CNBC CFO survey has asked C-suite executives about the upcoming presidential election, and it is early in the election cycle. CFOs also tend to follow the prevailing sentiment rather than buck it. During the early days of the GOP campaigning process for the 2016 nomination, CFOs surveyed said they did not think Trump would prevail. When he was the clearly established leader in the polls, by spring 2016 they came around, but later survey results showed there was never a majority of CFOs who thought he would win the election over Hillary Clinton.Trump’s numbers have taken a hit over fears of an economic slowdown and the trade war with China — CNN/RSS, Washington Post-ABC News, and Quinnipiac University polls all show a drop in the president’s job approval — and his slipping numbers caught Wall Street’s attention. JPMORGAN: cites recent poll numbers showing Trump is under pressure on trade, adds that a recession would be “politically devastating” — and says, as a result, we could see “real progress” with China and “a more sustained rally.” pic.twitter.com/iTlPbnOFoA— Carl Quintanilla (@carlquintanilla) September 10, 2019 CNBC’s survey of top corporate executives shows that U.S. trade policy is a headwind.A majority of CFOs say trade policy will be a negative for their business over the next six months. Nearly half say their companies have experienced higher input costs as a result of tariffs, and more than a quarter say they’ve increased prices to offset those higher costs.One other finding from the Q3 survey provides a potential reason why CFOs believe Trump’s chances are good. Trade repercussions are not translating into fears of a recession in 2020.Sixty-five percent of CFOs say the U.S. economy will not experience a recession in 2020, and they hold this belief even though they do not support Trump’s view that more interest-rate cuts are needed from the Federal Reserve to keep the economic expansion going. The majority of CFOs say that the current level of interest rates are “appropriate.”Economic conditions and electionsAn incumbent president has historically suffered in election years when the economy is struggling, though there have been only two formal recessions during election years since World War II. Harry Truman and Jimmy Carter ran for reelection in the same year as a recession. Truman won; Carter lost.By other economic measures, a weak economy does hurt an incumbent president’s chances. The University of Michigan Consumer Sentiment Index helps track consumer views on, and expectations for, the economy. Over that survey’s history back to the mid-20th century, it has “largely” found that “if the index is low, the incumbent doesn’t get reelected,” said Richard Curtin, director of surveys of consumers at the University of Michigan.Presidents running for reelection amid weak economic conditions also struggle because they need to find other issues to draw voters, Lynn Vavreck, an American politics and public policy professor at UCLA, recently told CNBC. She added that Trump is “better positioned than most” to withstand a slowdown, because he ran on identity-focused issues like immigration in 2016, “but without a good economy it will be harder for him to swing marginal voters.”A J.P. Morgan report from Thursday put the odds of recession within one year at 40%, citing not only the global economic weakness and the inverted yield curve in U.S. government bonds but tight labor markets, narrowing business margins and high corporate debt as vulnerabilities that are “ample, but not glaring.” It also noted high valuations in the tech sector and the trade war.The CNBC Global CFO Council survey found three regions around the world where CFOs describe economic conditions as “declining”: China, the Euro zone and the U.K. The U.K. has been “declining” for three straight quarters, while both the Euro zone and China slipped from “stable” in Q2 to declining in Q3.The U.S. economic situation shifted from “improving” in Q2 to “stable” in Q3, and an unresolved trade war could further pressure the outlook in future surveys.