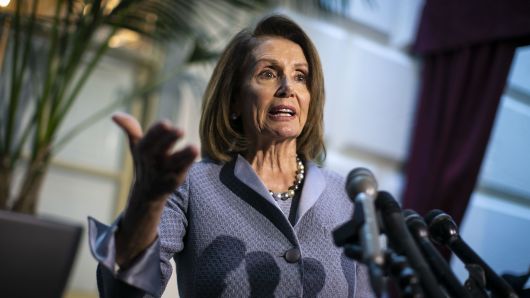 U.S. House Speaker Nancy Pelosi, a Democrat from California, speaks to members of the media while departing a House Democratic Caucus meeting on Capitol Hill in Washington, D.C., March 26, 2019.

Donald Trump has been dubbed the “Twitter President” by some for his favorite form of communication. But Speaker of the House Nancy Pelosi said his use of the platform has “cheapened the presidency.”

“There’s more of a responsibility for a president to communicate his point of view, which we should respect, he’s the president of the United States, whether you agree with him or not, he has a point of view,” Pelosi told Recode’s Kara Swisher in a recent podcast interview. “But to use the office of the president as an attack vehicle … for his market, it seems to have worked.”

Pelosi, a Democrat from California, also took aim at the press for its continuous coverage of his tweets, like last month, when the president tweeted over 50 times in a weekend.

“I think the press is an enabler of him,” she said. “And I think on the other hand, they are the best defense of him. The freedom of the press is the guardian of the gate of our democracy.”

Pelosi said that effort would have been better spent covering other issues like prescription drug prices or U.S. infrastructure.