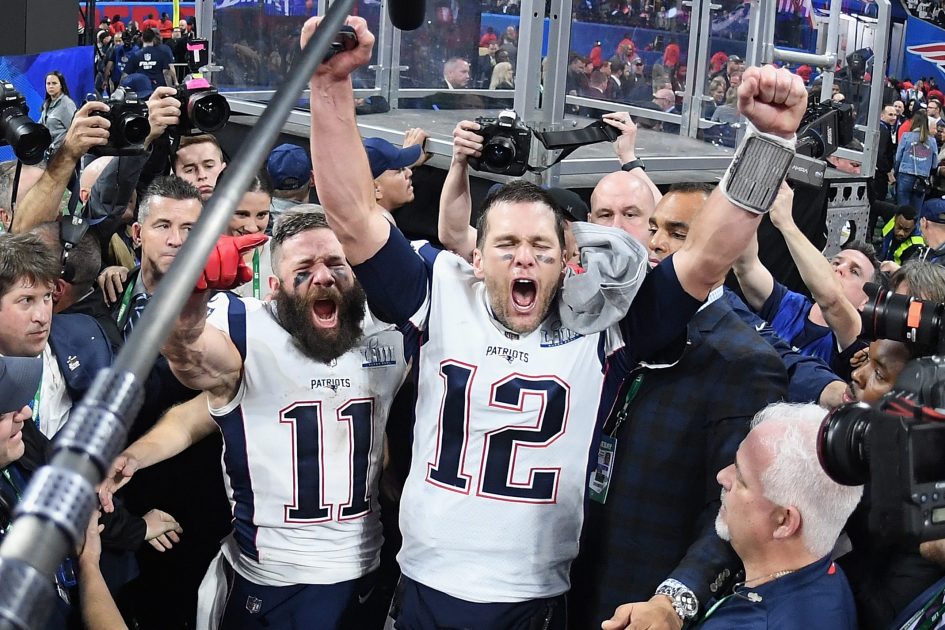 Julian Edelman #11 of the New England Patriots and teammate Tom Brady #12 celebrate at the end of the Super Bowl LIII at Mercedes-Benz Stadium on February 3, 2019 in Atlanta, Georgia.

The NFL returns to the national spotlight on Thursday night, but it remains to be seen if TV’s biggest draw can continue the ratings renaissance it experienced last season.

Television networks rely heavily on the NFL. Games and NFL-related programming accounted for 63% of Fox’s gross ratings points last season, according to MoffettNathanson. ESPN, CBS and NBC all got about a quarter of their aggregate gross ratings points from NFL content.

Like the rest of television programming, the NFL has seen its ratings decline in recent years due in part to viewers increasingly ditching cable for streaming services. All four major rights holders saw ratings decline in 2016 and 2017.

The league also has been the subject of political controversies in recent years, as activist players such as Colin Kaepernick and Eric Reid have drawn the ire of President Donald Trump.

The league’s ratings, however, grew by an average of 5% last year, according to MoffettNathanson. Viewership among people 18 to 24 shrunk by less than 5% and viewership increased among older viewers.

The upswing comes at a crucial time for the league, which is set to renegotiate its rights deals in the coming years. The league’s contract for Monday Night Football with Disney’s ESPN is set to expire after the 2021 season. Its contracts with the other networks are up a year later.

The 2019 season kicks off Thursday night, with Chicago and Green Bay playing on Comcast’s NBC. Ratings for the NFL preseason were an “awfully bad start” for the broadcast networks, according a note from Bernstein. One game between Miami and Jacksonville drew 49% fewer viewers than a similar game last year. Still, the analysts cautioned that preseason ratings are not necessarily predictive of regular season interest.

Dallas Cowboys owner Jerry Jones, who appeared on CNBC’s “Squawk on the Street” on Wednesday, pushed back against the idea that the league’s ratings are weakening.

“That’s such a misnomer, that our ratings are soft. They’re the hardest thing there is in all of television viewing,” Jones said.

The timing of the NFL season and the format of the games themselves make the sport particularly attractive to advertisers, Jones said.

Alexia Quadrani, an analyst at J.P. Morgan, said in a client note that the national Sunday broadcasts on Fox, NBC and CBS generate around $50 million per game in advertising revenue.

“The NFL’s interest culminates in the fourth quarter of the year. No other sport has its hot time. That’s Christmas and Thanksgiving. That’s when you want those decision makers in front of that TV set,” Jones said. “And then we have natural breaks. They’re called huddles. They’re called stoppages. They’re not intrusive, so we can put many messages up there at the same time.”

If the channels were to lose their rights to streaming video, they would lose not only the advertising revenue but also a key negotiating tool in other deals.

“The NFL’s partners use the rights as leverage in negotiations with pay TV providers to obtain higher distribution fees, and in the case of broadcasters, higher reverse compensation from affiliates,” Quadrani wrote.