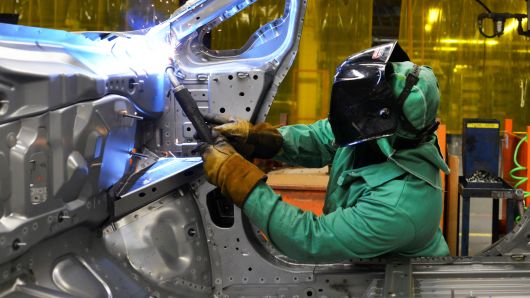 U.S. manufacturing output was unchanged in March after two straight monthly declines, leading to the largest quarterly decrease in production since 2017.

The Federal Reserve said on Tuesday manufacturing production last month was restrained by weak motor vehicle output. Data for February was revised up to show output at factories falling 0.3 percent instead of declining 0.4 percent as previously reported.

Economists polled by Reuters had forecast manufacturing output edging up 0.1 percent in March. Production at factories dropped at a 1.1 percent annualized rate in the first quarter. That was the first quarterly drop since the third quarter of 2017 and followed a 1.7 percent pace of increase in the October-December period.

Motor vehicles and parts production dropped 2.5 percent last month after increasing 2.3 percent in February. An inventory overhang in the automobile sector is weighing on production, contributing to factory employment declining in March for the first time since July 2017.

The outlook for the manufacturing sector, which accounts for about 12 percent of the economy, is cloudy. A survey from the New York Fed on Monday showed a measure of future business activity in New York state dropped to a more than three-year low in April, with companies downbeat about new orders and shipments.

Manufacturing is slowing as stimulus to capital spending from last year’s $1.5 trillion tax cut package diminishes. Activity is also being hobbled by a trade war between the United States and China as well as by last year’s surge in the dollar and softening global economic growth, which are hurting exports.

The flat manufacturing output in March together with a 0.8 percent drop in mining, lead to a 0.1 percent dip in industrial production in March. Industrial output edged up 0.1 percent in February. It fell at a 0.3 percent rate in the first quarter after rising at a 4.0 percent pace in the fourth quarter.

Capacity utilization for the manufacturing sector, a measure of how fully firms are using their resources, slipped to 76.4 percent last month from 76.5 percent in February. Overall capacity use for the industrial sector fell to 78.8 percent from 79.0 percent in February.

It is 1.0 percentage point below its 1972-2017 average. Officials at the Fed tend to look at capacity use measures for signals of how much “slack” remains in the economy how far growth has room to run before it becomes inflationary.