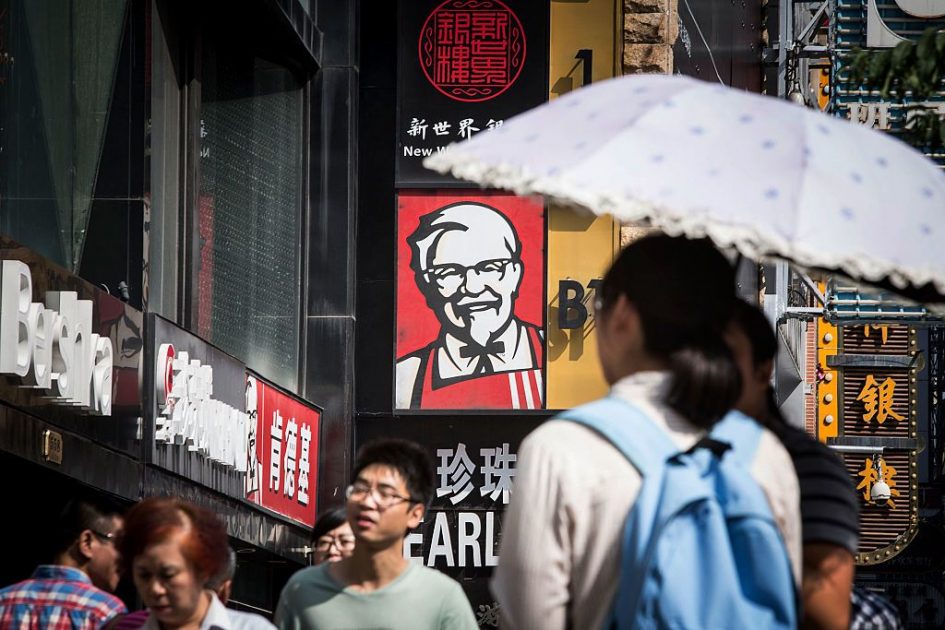 Pedestrians walk by a KFC location in China

Amid a trade war that has waged on for more than a year, the largest restaurant chains in the U.S. are ramping up development in China.

Trade tensions between the U.S. and China once again flared up Thursday after President Donald Trump threatened another round of tariffs on the roughly $300 billion of Chinese goods that had not already been targeted by American levies.

The trade war is taking its toll on the slowing Chinese economy. Last month, the country posted its lowest rate of economic growth — 6.2% — in 27 years.

Fast-food chains tend to benefit from economic downturns because consumers look for cheaper options, according to Aaron Allen, owner of global restaurant consultancy Aaron Allen & Associates. And China’s foodservice economy — meaning how much consumers spend on food outside of the grocery store — is still growing.

Even when slowing down, China’s economic growth still tops that of the U.S. And with a population of 1.4 billion people, China is an attractive market for restaurant chains looking for new customers.

“When you look at that potential, it won’t deter American brands from pushing into China,” Allen said in an interview.

However, restaurants could feel a pinch from the trade war. Multinational restaurant companies typically source some of food from their home markets and some from local markets, according to Allen. Retaliatory tariffs levied by China on U.S. goods could result in higher food costs, he said. And trade tensions between the U.S. and China have already resulted in some U.S. goods being stuck at Chinese ports.

In 2017, the company sold the bulk of its China and Hong Kong business to Carlyle Group, a U.S. private equity firm, and Citic, a state-owned investment group, as part of a broader global strategy to slim down the Golden Arches. The deal helped the global fast-food giant cut costs because it no longer needs to operate those stores, but it can still collect rent and royalty revenue.

On its conference call a week ago, McDonald’s CEO Steve Easterbrook said that company is very confident about its long-term future in China. While the fast-food chain does not release China’s performance metrics individually, executives said that Chinese stores saw both sales and traffic grow in its second quarter this year.

“It’s incredibly competitive. You’ve seen the pace at which other people are expanding, but it is a huge market,” he told analysts. “The emerging middle class, the greater affordability of the mass population there is heading towards Western [quick-service restaurant] type of average checks and affordability.”

During its second quarter a year ago, China and the U.S. were in the middle of imposing retaliatory tariffs on billions of dollars of imports. As a result, McDonald’s traffic growth in China took a hit.

“The impact within that market on the uncertainty of the trade discussions has – I mean, clearly, it’s hit the markets, which, in turn, hits consumer confidence,” Easterbrook told analysts last July.

In terms of the direct impact of tariffs, Easterbrook has said that the company is not very exposed because its international restaurants usually do not import the majority of the food used by the chain.

Popeyes’ foe KFC already has a strong foothold in China with more than 6,000 stores. KFC reported $1.4 billion in net sales in China — more than a quarter of KFC’s total revenue — during its second quarter. KFC’s parent company Yum Brands spun off its Chinese business into Yum China, which now operates those stores, in November 2016.

Popeyes is the last of Restaurant Brands’ three chains to sign such a deal. Burger King has more than 1,000 stores in China. Canadian coffee chain Tim Hortons signed a deal last year to open 1,500 stores in the country over the next decade.

Restaurant Brands’ stock, which has a market value of $35.6 billion, is up 48% so far this year. The company does not release financial metrics for individual markets.

Tim Hortons, which boasts that it sells eight out of 10 cups of coffee in Canada, has seen sales growth slow in its home market. Now it is looking to China’s rapidly expanding coffee market for sales growth.

After opening its first store in China in March, Tim’s is up to 14 locations there. Restaurant Brands CEO Jose Cil told analysts Friday that the chain is trying to make the Canadian brand relevant to the Chinese consumer by adjusting its food menu and creating more tea beverages.

China is famously a nation of tea drinkers, but coffee sales have been growing as chains like Starbucks and Xiamen-based Luckin Coffee expand quickly.

Starbucks has targeted China as one of its long-term growth markets, along with the U.S.

The global coffee giant, which is celebrating its 20th year in China, had more than 3,900 stores at the end of June. It is aiming to reach 6,000 Chinese stores by fiscal 2022.

Sales in Starbucks’ China/Asia Pacific segment made up nearly 20% of its fiscal-third quarter revenue. The Seattle-based company reported same-store sales growth of 6% in China during the quarter.

“We remain bullish on the long-term market opportunity as we deploy capital to build new stores and expand our presence,” CEO Kevin Johnson said on the conference call a week ago.

Starbucks’ stock, which has a market value of $114.4 billion, is up 48% so far this year. At times — like the first half of fiscal 2018 — robust same-store sales growth in China has convinced investors to hold onto shares as its U.S. business slowed.

Although China lags behind the U.S. when it comes to per capita coffee consumption, the Asian country is further ahead when it comes to beverage delivery. Roughly 6% of the country’s total sales during its third quarter came from delivery, Johnson said.