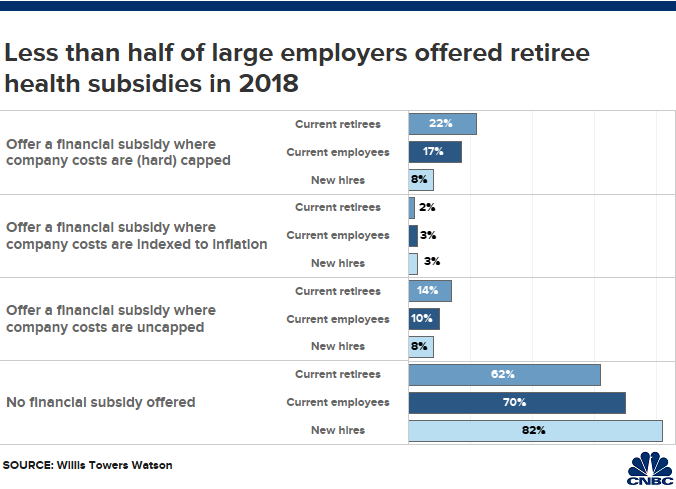 Maria Alessio, left, retired from Walgreens in fall of 2018 expecting the drugstore chain to help her pay for health insurance. Walgreens cut the payments for her and about 550 other early retirees shortly after Alessio retired.

She decided to retire in last fall at age 61 because she could no longer take standing all day filling prescriptions. She and her fellow pharmacists traveled to Italy to celebrate. Then, days after she returned, she received a letter from Walgreens saying it would no longer subsidize Alessio and her family’s health insurance under new restrictions on benefits for retired employees, effective next year.

“I didn’t think that would happen,” said Alessio, who hadn’t taken the cuts into account in her retirement planning. She currently pays $27,600 annually for health insurance for herself, her husband and son, about $10,800 of which was covered by Walgreens. “I was totally shocked.”

Walgreens said in a September letter reviewed by CNBC that it would no longer subsidize medical benefits for its former employees who hadn’t turned 64 by March 31, citing “rising and unpredictable healthcare costs.”

For Alessio, now 62, the cuts have raised uncertainty. Her son, who will turn 26 in September, bought his own health insurance this month, and her husband will be eligible for Medicare next year, which should help bring her total premium down. But she does not yet know how losing the subsidies will affect her financial situation.

Some 550 retirees receive the subsidies from Walgreens before they turn 65 and are eligible for Medicare. Under the age restrictions laid out in the September letter, they won’t receive the payments, which vary in amount based on employees’ years of service.

Neither will employees who were eligible for the benefit upon retirement under the old rules, which made it available to employees who had turned 50 by May 2017 and had worked at the company 20 years. (Employees still needed to be at least 55 with at least 25 years of service at the time of retirement to receive the benefit).

Walgreens tightened the requirements for the subsidies in the past, eliminating eligibility for new hires and younger employees, but until last fall, the company had stopped short of touching the payments of retirees who were already receiving them.

“Pre-65, I do think it’s unusual to take people who already have a subsidy right now and eliminate that subsidy,” said Derek Guyton, a partner in the health and benefits business at Mercer, owned by Marsh & McLennan. “What’s more common is you tell people way ahead of time you’re not going to have this subsidy when you get to 55 or what have you. That obviously has happened a lot and continues to happen, but taking it away from people, some employers consider that almost an employment contract.”

Walgreens has said it is working on a “lower-cost, unsubsidized retiree health program starting in 2020,” according to an October letter it sent to retirees. It has yet to provide details on its plan.

Walgreens spokesman Phil Caruso said in an email Friday that the company reviewed a host of factors before deciding to change eligibility requirements for the subsidies.

“We are continuing to work toward a new retiree healthcare program for 2020, paying particular attention to the transition impact for those with current subsidized coverage,” he said. “We will continue to update our retirees.”

The drugstore chain employed roughly 354,000 people as of August, according to its annual report.

Walgreens’ move to cut the payments comes at a time when U.S. companies are searching for ways to curb rising health costs and trim retirement benefits to reduce obligations.

Companies started offering retiree health benefits in the 1970s when they were a cheap way to recruit and retain employees, said Paul Fronstin, director of the health research and education program at the Employee Benefit Research Institute. New regulations in the 1990s forced companies to post the commitments as liabilities on their financial statements, leading companies to rethink them, especially as health-care costs soared.

They have done so in a variety of ways. For instance, companies such as General Electric and IBM moved retirees off group health insurance plans and onto private exchanges, or marketplaces with several plan options that outside benefits firms manage. This helps employers cap their health-care expenses.

Walgreens went even further in 2013, when it was one of more than a dozen companies to move active employees onto the Aon Hewitt Corporate Health Exchange.

Companies that have restricted the subsidies they offer to assist with medical benefits have generally focused their cuts on new hires, younger employees or retirees who are Medicare eligible, benefits experts say.

According to a 2018 survey of 554 employers by insurance broker Willis Towers Watson, 38% offered some type of financial subsidy to help current retired employees pay for medical benefits before they are eligible for Medicare at age 65. Thirty percent extended the benefit to current employees, and just 19% made it available for new hires.

“I can’t think of a company that [eliminated subsidies for current retirees],” said John Barkett, director of policy affairs at Willis Towers Watson. “It gets back to the promise they made to their retirees.” He added that employers “still want to offer their commitment, they just want to do it at a better value.”

Indeed, Walgreens retirees say they trusted the subsidies wouldn’t go away and have found the cuts hard to justify.

“If Walgreens was a struggling company… I could see it,” said Chris Knupp, 61, who retired from Walgreens in 2016 as a senior director in the insurance department. He and his wife will lose his subsidies under the new rules. “But this is a company who reported $5 billion of income last year and has posted profits for I don’t know how many years. “

The new rules are also changing retirement timelines of some current employees, including Ed Meyerink, 52, of Bluffton, South Carolina. Meyerink has worked at Walgreens for 27 years and planned to retire when he turned 55. He and his wife bought an RV so they could see the Grand Canyon, spend the summer in California and maybe spend some time with their son who lives in Boca Raton, Florida.

Without Walgreens subsidizing their health insurance, he plans to keep working as a pharmacist until he’s old enough for Medicare. They will still take the RV for weekend trips, but they’re scrapping their other itineraries.

“Zero does me absolutely no good,” Meyerink said of the subsidies. “It means no traveling. None of the plans we have are going to come to fruition.”

Despite its profits, the drugstore chain is under pressure from investors to cut costs.

Pharmacies are getting paid less to fill prescriptions as insurers squeeze them. Prices of the drugs they’re dispensing aren’t increasing at the same rates they used to as drugmakers face pressure from lawmakers. People also aren’t buying as much candy and soap at drugstores, instead buying convenience items online on sites like Amazon.

The company earlier this year ramped up cost-cutting after CEO Stefano Pessina called its second-fiscal quarter the most difficult quarter since Walgreens acquired Boots Alliance in 2015. Walgreens now expects to save $1.5 billion annually by 2022, executives told Wall Street analysts on a conference call in April.

In cutting the subsidies for early retirees, Walgreens reduced its benefit plan obligation by $201 million in 2018 from the previous year, the company said in its annual report.

“It’s kind of odd, the timing,” said Brian Tanquilut, senior vice president of health-care services equity research at Jefferies. “I can’t think of any other companies who are doing this. It feels like a lot of this was done years ago, so for them to do this now shows they’re under pressure and are forced to look at their cost savings options now.”

Paul Fischer worked at Walgreens as a pharmacist for 29 years before retiring in 2011 when he turned 55. Now 62, Fischer and his wife will lose their health insurance subsidies next year.

To be sure, Walgreens has increased some benefits for its current employees even though it is cutting the retiree subsidies. For instance, last year it invested $100 million to boost pay for more than 100,000 store employees.

Walgreens hosted two conference calls that lasted more than an hour each in November to field people’s questions. Paul Fischer, a 62-year-old retiree from Ormond Beach, Florida, described the call as “pretty much chaos” with people telling Walgreens executives how frustrated they were to lose benefits they were already receiving.

Robert Montes, who spent most of his 34 years at Walgreens in compensation and benefits, and his colleagues met with Walgreens executives later that month. In their hour-long meeting at Walgreens’ Deerfield, Illinois, headquarters, they asked how the company could say it did not have money for the subsidies, why it said costs were unpredictable and why it thought eliminating subsidies would solve concerns about retirees’ costs.

“They were nice, polite, cordial,” Montes said. “They said you’ve given us some good comments but in essence, they’ve held onto their original game plan and maintained radio silence throughout all this and have not implemented any change management to their relative plan. We sit here frustrated by their silence at this point.”

Caruso, the Walgreens spokesman, said in the email to CNBC that “members of our executive management met with retiree representatives to listen to their concerns, engage in dialogue, and inform them that we are continuing to work toward a new healthcare program for 2020.”

Walgreens told retirees it would share more details sometime this year. Retirees say they have yet to hear from the company. Until then, they’re trying to figure out what to do about their previous spending plans.

Fischer and his wife, Susan, bought land in Jasper, Georgia, where they wanted to build a home when she retired in January. They also considered buying property in Texas. They wanted to travel to Ireland and Italy. Those plans are on hold while they await an answer.

The couple set aside cash to pay for their health insurance. Now, they’re not sure whether it will be enough, said Fischer, who worked at Walgreens for 29 years and retired as a pharmacy manager. They may have to sell some of their investments to cover the lost subsidies.

“It all goes back to how could a financially sound company take away benefits from people who already retired who can’t go back,” he said.