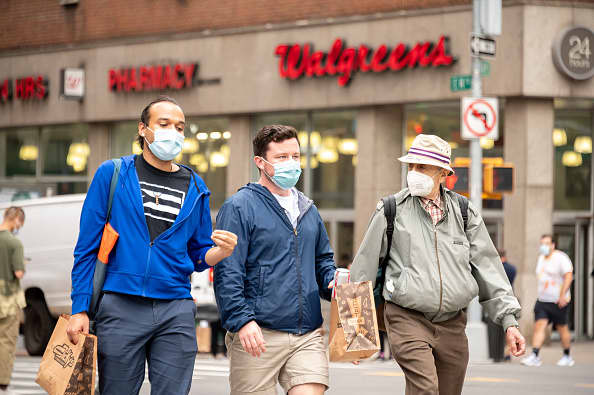 Walgreens Boots Alliance reported Thursday fiscal first-quarter earnings that exceeded Wall Street’s expectations, helped by stronger-than-expected pharmacy sales.Walgreens shares were up more than 7% Thursday morning.Here’s what Walgreens reported compared with what analysts were expecting for the first quarter ended Nov. 30, based on Refinitiv data:Earnings per share: $1.22 cents, adjusted vs. $1.03 expectedRevenue: $36.31 billion vs. $34.95 billion expectedIn the first quarter, Walgreens posted net loss of $308 million, or 36 cents per share, compared with a net income of $845 million, or 95 cents per share, a year earlier.Excluding a charge from its AmerisourceBergen investment, it earned $1.22 per share, higher than the $1.03 expected by analysts surveyed by Refinitiv.Sales rose to $36.31 billion from $34.34 billion a year earlier, outpacing the $34.95 billion that analysts expected.Walgreens said its pharmacy sales picked up in the U.S. as it filled more prescriptions and gave flu shots. Comparable pharmacy sales rose 5% compared with a year earlier. The higher sales came despite less foot traffic, lower sales of cough, cold and flu medications and fewer new prescriptions as people skipped the doctor’s office and socially distanced during the pandemic.In the United Kingdom, Walgreen’s comparable pharmacy sales rose 2.5% percent compared with a year ago, largely due to a reimbursement from the National Health System. Boots UK stores have been particularly hard-hit by restrictions during the pandemic. The NHS payment helped offset a drop in prescription volume.Walgreens reiterated its outlook for low single-digit growth in adjusted earnings per share this year. Yet the company cautioned it will face headwinds in the second quarter as the U.K. has another lockdown and customers continue to limit trips to the store.”We’re much better at managing through lockdown now, which is good, but still it is a cloud in the future,” Chief Financial Officer James Kehoe said on a Thursday earnings call. “And then secondly, you see the large number of incidences in the U.S., that does pretty quickly drive through to lower medical visits.”For the company, that means fewer prescriptions to fill and less visits to its stores.Yet Kehoe said Walgreens remains focused on long-term opportunities rather than short-term, pandemic-related challenges. He said the company has cut costs and is investing in growth areas as the drugstore industry faces disruption and the pandemic changes shopping patterns. It’s adding more health-care services and expanding its digital offerings. It unveiled a new mobile app and now offers curbside pickup at its U.S. stores, which can have online purchases ready for customers in as little as 30 minutes.It announced plans in July to open hundreds of primary care clinics at its stores staffed and operated by VillageMD. It said Wednesday it would accelerate the timetable for that and expects to have 600 to 700 clinics open within the next four years.On Wednesday, it also said it would divest its drug distribution business in Europe by selling it to U.S. drug wholesaler AmerisourceBergen for $6.5 billion. The sale will allow Walgreens to focus on its pharmacy and retail businesses.The company has nearly completed its planned store closures. Kehoe said it has shuttered 232 of the 250 Walgreens stores slated for closure, and 158 of the 200 Boots UK stores. He said it’s on track to deliver more than $2 billion in annual cost savings by fiscal 2022.Last year, it cut more than 4,000 jobs at its Boots UK and Boots Opticians businesses, a 7% reduction of the workforce in those units.Walgreens Boots Alliance CEO Stefano Pessina is stepping down after five years in the role, but his successor has not yet been named. Its rival, CVS Health, is also getting a new CEO. Karen Lynch will succeed longtime CVS Chief Executive Larry Merlo in February.Walgreens started administering Covid vaccines in mid-December to staff and residents at nursing homes and other long-term care facilities. It plans to offer the shots to the general public at its drugstores, once they’re available.Walgreens shares have fallen about 28% over the past one year, bring its market value to $37.2 billion.Read the company’s full press release here.