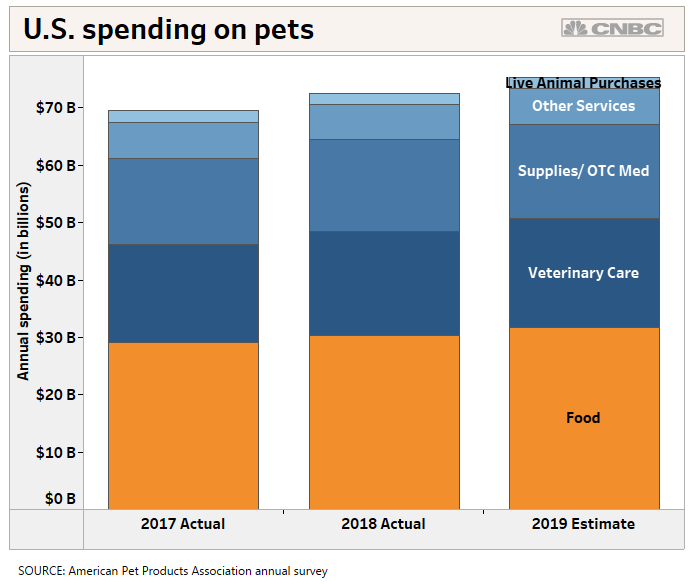 Walmart is opening up dozens more veterinary clinics in its stores and launching its first online pet pharmacy, hoping to lure more U.S. pet owners who are spending billions of dollars each year on their dogs and cats.

The biggest retailer in the world already operates 21 veterinary clinics in its stores across six states, but over the next 12 months it will growth that number to 100. It will start the expansion by opening nine new clinics in the Dallas-Fort Worth area later this month and into June, Walmart said in a blog post. There, pets can receive vaccines, care for minor illnesses and other routine exams.

Walmart has seen a roughly 60% increase in the number of dog- and cat-related health-care items sold on its website over the past year, a company spokeswoman said.

More shoppers in the U.S. are pampering their pets, opting to splurge a little more for better care and even organic food options. A record $72.5 billion was spent on pets in the U.S. last year, according to the American Pet Products Association. The industry trade group estimates spending will exceed $75.3 billion this year, compared with $60 billion spent on pets just four years ago.

With pet food, it’s the “fresh” category that’s really driving sales, as owners become more conscious about what they’re feeding their animals. That’s as many owners — and many millennial pet owners — are taking better care of their own bodies.

Sales of fresh pet food in the U.S. skyrocketed 70%, to more than $546 million, between 2015 and 2018, according to data compiled by Nielsen. And that doesn’t include online sales or people making their own fresh pet food, Nielsen said.

Other retailers are jumping at the opportunity to take a greater share of the billion-dollar pet market, too.

Amazon notably has its own pet food brand called Wag, named after Wag.com, which it acquired when it bought Quidsi in 2011. Target has partnered with popular dog-toy maker BarkBox to sell its treats and chew toys in Target stores and online. And Petco has partnered with “JustFoodForDogs” to open a kitchen at its New York flagship location where it says it will produce more than 2,000 pounds of fresh pet food every day.

“The pet category is one where it’s Amazon that faces a threat from Chewy.com, the top destination for pet sales online,” said Dave Aronson, an analyst at 1010data. “And it’s not surprising to now see Chewy focus on its own private label … as a way to capitalize on the popularity of its site, in order to generate higher profits. “

Aronson said pet food and snack sales should continue to grow online, as shoppers appreciate the convenience of not having to lug heavy bags home from the store.

Building on its momentum in the industry, Chewy.com just last month filed documents with regulators to prepare for an initial public offering, as its sales grew to $3.5 billion in fiscal 2018, up from $2.1 billion in 2017. Chewy says it offers free shipping in one to two days on orders over $49, while Walmart offers free two-day shipping for online orders exceeding $35.