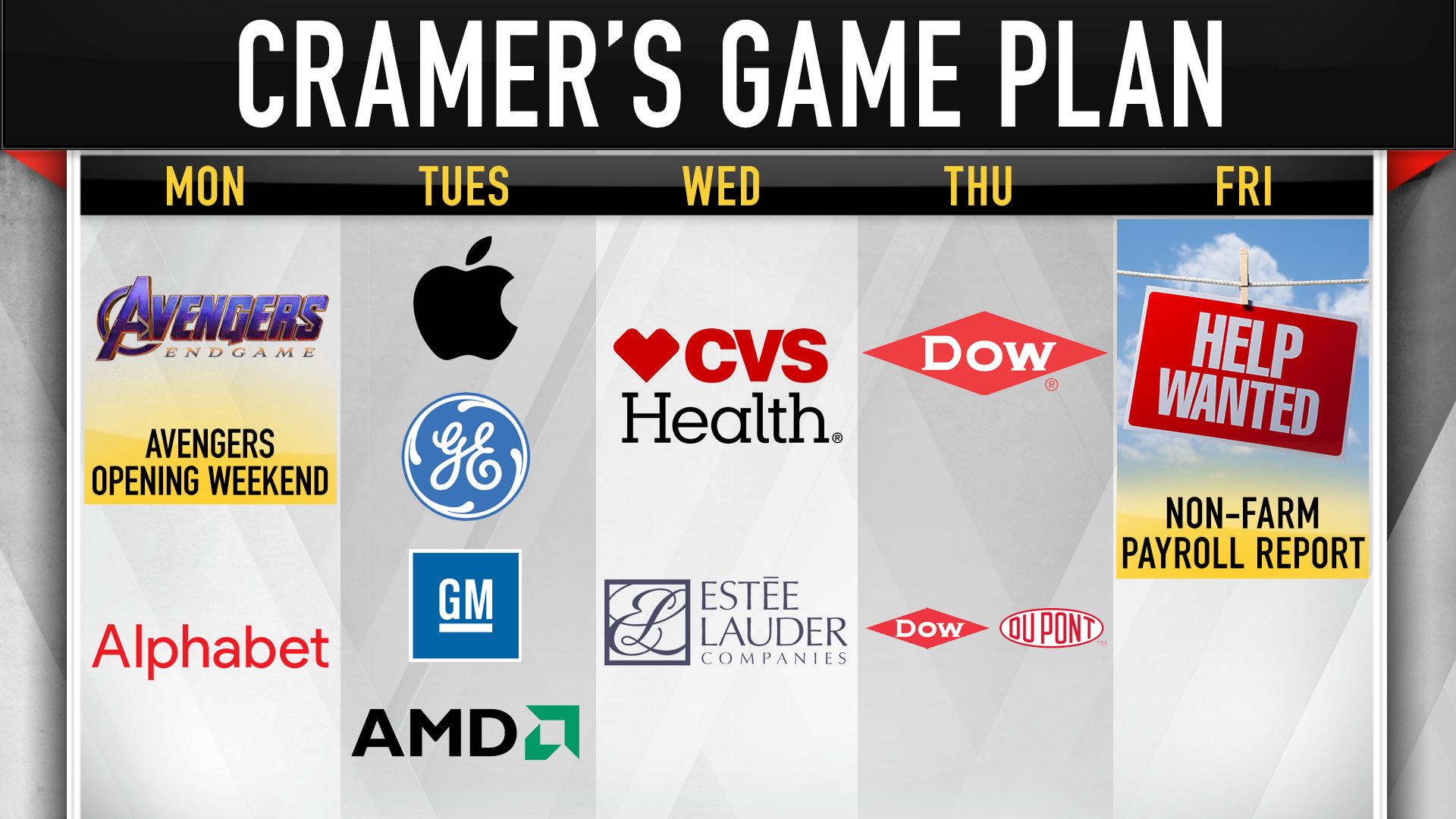 A slew of companies have reported earnings in the past week, but the busiest week of reports is still ahead, CNBC’s Jim Cramer said.

“But make no mistake about it. We are in the heart of earnings season right now, and that is what’s really driving the action,” the “Mad Money” host said.

More results are set to come out next week, including the jobs report for the month of April.

Here’s what Cramer will be watching on the market next week:

Disney: While Disney isn’t expected to report quarterly earnings until the following week, the box office numbers for “Avengers: Endgame” will roll in on Monday. Cramer said he has never seen a more anticipated sequel, or such a stock rise, as the entertainment conglomerate heads into the potential $1 billion weekend opening.

“The run was breathtaking, and I bet Disney can keep climbing if “Endgame” beats the billion-buck bar,” he said. “Otherwise, yeah, let’s accept the fact that after this run could be ripe for a little profit-taking.”

Alphabet: Google’s parent delivers quarterly earnings after the market closes. Cramer said he is expecting an upside surprise, and investors want to find out how ad sales are going and how much can be made from YouTube’s premium subscriptions.

“I also want to find out if Google Cloud can really rival Amazon Web Services … and Microsoft Azure, another great player,” he said. “It’s a very important quarter.”

Apple: The iPhone maker will host a conference call with shareholders after the bell. Installed base data is more important than phone sales, as the company creates a new identity and digs its feet into the subscription economy, Cramer said.

“I am concerned that there’s too many Johnny-come-latelies in this stock – camp followers who bought it north of $200, it closed at $204 – and these summer soldiers, these sunshine patriots, they won’t be satisfied no matter what Apple says, ” he said. “So don’t pay too much attention to the action. Pay attention to the substance.”

“I think CEO Larry Culp is doing an incredible job, I’m one of his biggest backers, but he’s not Hercules, and these stables still need a lot of cleaning,” Cramer said. “This is the quarter where Culp needs to find a way out of the power box.”

“I expect a lot of money to pour into GM because last night, as I predicted here, Ford delivered a huge upside surprise, ” he said. “That could be a very mistaken extrapolation.”

Advanced Micro Devices: Shareholders will hear from the chipmaker at the end of trading. Investors will learn from the call if Intel’s challenges are isolated, Cramer said.

“In many cases, Intel’s pain could be AMD’s gain — I think they could be taking major market share,” he said. “We’re gonna find out when we listen to CEO Lisa Su’s tale of the semiconductor tape.”

“We’re gonna find out how that Aetna merger’s working,” Cramer said. “Maybe that can get the stock moving away from its 52-week low where it seems to be a denizen.”

Estee Lauder: The cosmetics company has an earnings call before trading opens. Cramer expects CEO Fabrizio Freda to put on a clinic.

Dow Chemical: The chemical maker will have its first earnings call since spinning off from DowDuPont earlier this month. The stock has a roughly 5% yield.

Non-farm payrolls: The U.S. Labor Department will release employment data for the month of April. Cramer expects the numbers to be strong, but worries it could trigger analysts to call for the Federal Reserve to adopt a hawkish monetary policy again.

“Don’t listen to these people,” Cramer said. “Stick to your knitting.”

WATCH: Cramer delivers his game plan for the week ahead