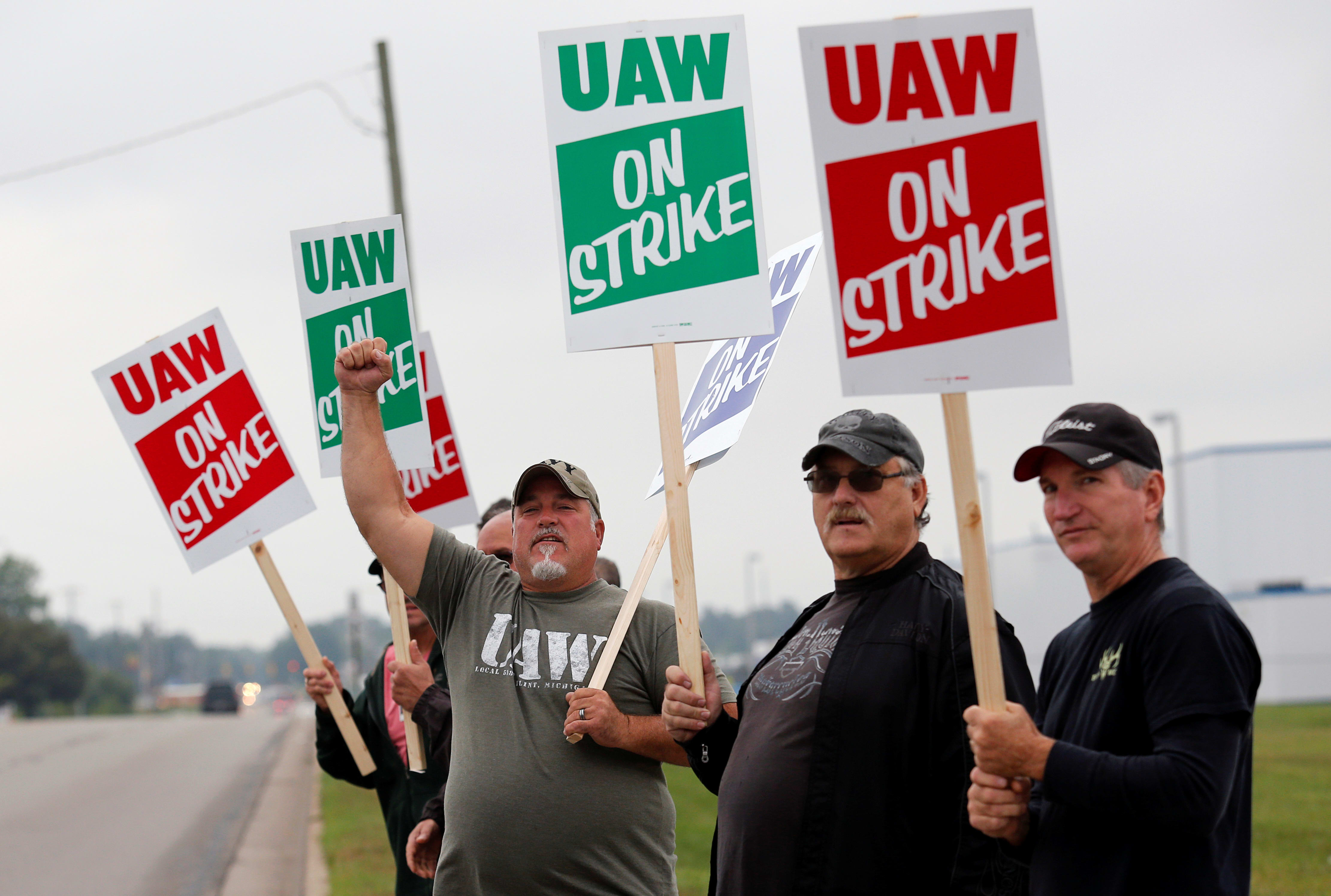 General Motors assembly workers picket outside the General Motors Powertrain Flint Engine plant during the United Auto Workers (UAW) national strike in Flint, Michigan, U.S., September 16, 2019.Rebecca Cook | ReutersAs part of its initial settlement offer for the United Auto Workers Union, General Motors said it would build an all-new battery-electric pickup at a plant in Detroit the company planned to close.While the UAW has rejected the offer and sent roughly 48,000 of its workers out on strike, the EV truck is widely expected to remain part of an eventual settlement. Building the truck and saving jobs at the Detroit-Hamtramck assembly plant is one of the concessions the company is willing to give. GM’s communications director Tony Cervone said he could offer “no details” about the planned battery-electric pickup but, since CNBC first reported that the truck was in development last winter, some specifics have begun to leak out.The new model will go into production in 2021, “most likely” as a 2022 model-year offering, said Sam Fiorani, head of global vehicle forecasting at industry market research firm AutoForecast Solutions. That’s about the same time rival Ford will introduce its own all-electric truck, he said. It’s a full year behind Rivian, the suburban Detroit- based start-up that plans to build its own electric pickup. Tesla has also confirmed plans for an electric pickup, CEO Elon Musk saying earlier this month a production version will “most likely” debut in November.Demonstrators hold signs reading “UAW On Strike” during a United Auto Workers (UAW) strike outside the General Motors Co. Hamtramck assembly plant in Detroit, Michigan, U.S., on Monday Sept. 16, 2019.Anthony Lanzilote | Bloomberg | Getty ImagesRivian’s R1T is sized somewhere between the midsize Chevrolet Colorado and full-size Chevy Silverado trucks. Its motors will make “close to 800 horsepower,” the company has said. That will allow it to tow up to 11,000 pounds, and its 180 kilowatt-hour lithium-ion battery will deliver over 400 miles range.By comparison, Fiorani said he expects the Chevy truck will be “even bigger,” along the lines of the gas-powered Chevrolet Silverado. “You have to expect its towing capacity would be more like the Silverado, in excess of 11,000 pounds,” he added, while predicting Chevy’s EV pickup would offer similar range to Rivian’s R1T.Whether the new truck will get a name linking it to the Silverado line or opt for something new is uncertain. Chevy has opted for names highlighting the battery-based technology in its first two electric models, the plug-in hybrid Volt and all-electric Bolt.Unlike the Silverado, with its ladder-frame chassis, the GM pickup will rely on a skateboard-like platform, its batteries, motors and other key drivetrain components below the load floor. That’s an approach found in such products as the Chevy Bolt and Tesla Model 3, and one essentially all future long-range electric vehicles will adopt.But Fiorani and other analysts think GM is developing a unique platform for the pickup to handle the demanding conditions a work truck faces every day. That said, several veteran industry watchers anticipate the platform could be shared with other large vehicles, perhaps an all-electric version of the Chevy Tahoe and Silverado SUVs, suggested Fiorani. Those could also move into the factory known locally as the Poletown plant.”It’s hard to imagine an electric pickup truck alone would fill that plant, at least initially,” said Michelle Krebs, an analyst with Cox Automotive. But the challenge for GM, Krebs stressed, is figuring out what sort of demand it can anticipate.”Everybody’s going to have an electric pickup, at some point,” she said. “But it’s an untested market. We don’t know if there will be enough sales to go around.”Pickups account for nearly one in every eight new vehicles sold in the U.S., and the Silverado has long been the second best-selling vehicle overall in the U.S., just behind the market leader, Ford’s F-150. But there’s simply no clear data on whether traditional truck buyers will be willing to plug into electrics, especially early on, Krebs and Fiorani agreed.Battery-electric vehicles of all forms are gaining momentum, but they still account for barely 2% of the U.S. market, so Krebs said it likely will take time for GM – and its competitors – to generate significant volumes for their planned electric pickups.