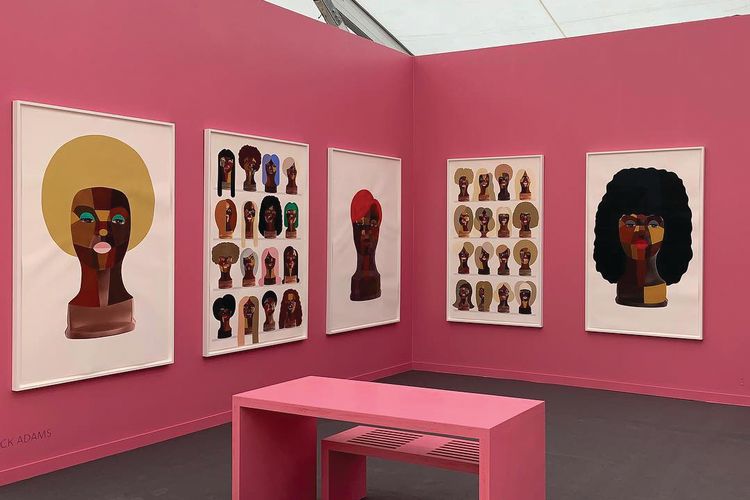 
A week before the first VIP set foot inside the Frieze tent on Wednesday, Toby Clarke, the director of London’s Vigo Gallery, had sold his entire booth of paintings by the hot Brooklyn artist Derrick Adams. Priced between $10,000 and $50,000, all ten works on paper, part of Adams’s Beauty World series, were snapped up by Clarke’s top collectors, including the philanthropist Beth Rudin deWoody. “All works were sold off the back of conversations, without sending any emails. Demand for Derrick’s work is huge,” Clarke says.

Selling art off the back of a jpeg is as old as smart phones, but advance sales have historically been unpopular among fair organisers, due to concerns that collectors will be put off from attending in person or that the fair-going experience will be devalued for those who do. Clarke says that such early selling is rare for his gallery, and he prefers to use fairs as a place to meet new collectors. But, in an increasingly crowded and costly fair landscape, coupled with expanding online markets, pre-selling is becoming ever more prevalent. As Frieze’s director Victoria Siddall acknowledges: “Art fairs are platforms that enable galleries to sell art—we expect that to extend before and after the fair and we want galleries to derive as much value from our fairs as possible.”

Patricia Hanna, who manages the collection of the Miami-based property tycoon Jorge Pérez, says she both reserves and closes deals on works before a fair. “It’s about 50/50,” she estimates, adding: “Not all purchases are pre-meditated.”

The Pérez collection bought a Hank Willis Thomas neon piece before Art Basel in Miami Beach opened last year. “In that instance, we knew we wanted the piece, and a neon is a neon,” Hanna says. “But for the most expensive or historically significant pieces, or those where scale or condition is a consideration, we would usually want to see the work in person.”

Thaddaeus Ropac, who has galleries in London, Paris and Salzburg, says it would be “irresponsible” for dealers to not do their homework. “We wouldn’t expect someone to wander over to the booth and acquire something on the spot. We are constantly working to place our artists in the best possible collections,” he says. Museum acquisitions can be a lengthy process, with trustees and red tape to contend with, so getting the ball rolling early is crucial. “Most works are sold between 11am and noon on the opening day,” he adds, noting that around 50% of his booth might be “on hold” before a fair opens.

The London dealer Josh Lilley says he makes sure the majority of works are available on the booth, but believes it is “common sense” to reserve pieces. “If it costs you around $100,000 [to do a fair], you want some sort of assurance. The risks are huge.” Ultimately, Lilley says, his job is to promote his artists, and to give them context and exposure. “Is it my responsibility to cater for a level of availability for collectors? No, it’s not.”

For smaller galleries, pre-selling is less common, according to Ciprian Ilie, the founder of Frameless Gallery, who has contacted 300 collectors ahead of Frieze New York, a third of whom he expects to attend. He sounds a note of caution: “It might offset the costs of participating at an art fair, but it can also be dangerous to bank on a sale which can potentially fall through.”

Online viewing rooms have become an accepted way to sell ahead of fairs, usually for less expensive items. However, this is also fast-changing: earlier this year, Gagosian Gallery announced it had sold an Albert Oehlen painting for $6m hours after is was unveiled online, surpassing his auction record of $4.7m.

“The online component is having a huge impact; people can research what a piece is going for somewhere else or what it sold for at auction,” Hanna says. “I’m sure that’s putting more pressure on galleries to keep up.”

The New York art adviser Lowell Pettit says that fewer and fewer galleries are willing to extend the amount of time a work is on reserve at fairs. But, more importantly, Pettit notes that relationships between galleries, artists and collectors are established over years, not in the days leading up to a fair. “Some of this may seem like bald opportunism when it can be due diligence over many, many months.”

Ralph Rugoff on why the 2019 Venice Biennale has a ‘split personality’
Berlinische Galerie forced to close suddenly because of structural problems
To Top
error: Content is protected !!
Top