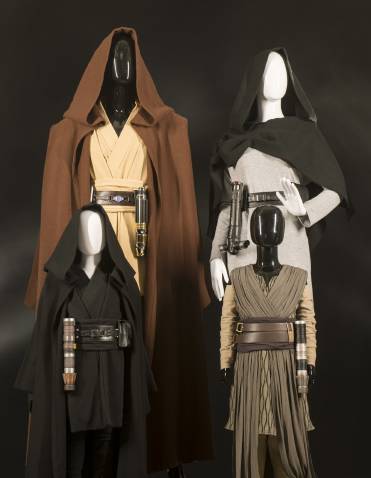 Guests visiting Star Wars: Galaxy’s Edge at Disneyland Park in Anaheim, California, and at Disney’s Hollywood Studios in Lake Buena Vista, Florida, will be able to wander the lively marketplace of Black Spire Outpost and encounter a robust collection of merchant shops and stalls filled with authentic Star Wars creations.

The Black Spire Outpost on Batuu is finally open at Disneyland Resorts in Anaheim, California.

Here fans can immerse themselves in the Star Wars universe by building their own lightsabers and droids, sipping on some blue milk and aligning themselves with the Resistance or the First Order. There’s just one thing parkgoers aren’t allowed to do — wear the Jedi robes they’ve purchased at Black Spire Outfitters.

While fans can purchase authentic attire based on the films, they aren’t actually permitted to wear these items in the park, unless they are under the age of 14. This is a far different policy than that of Universal Studios’ Wizarding World of Harry Potter park, where fans of all ages wear robes, sweaters and scarves purchased at the Hogsmeade or Diagon Alley park locations.

The no-costume policy has been a long-standing rule at Disney parks. Employees at Disneyland and Disney World often dress in costume, either at retail locations or for meet and greets with fans, and the company doesn’t want guests to be confused for employees.

The last thing the company wants is for someone to have a bad experience with a non-Disney employee and blame it on the park staff. It’s also for safety. Disney doesn’t want a young child to mistake a guest for a vetted staff member.

For Batuu, Walt Disney Imagineering spent three years developing the costumes for its cast — and uniforms aren’t one size fits all. The team designed the wardrobe to be modular, allowing cast members to pick and choose from a variety of different clothing, including tunics, wraps and vests, to create their own signature look.

At Star Wars: Galaxy’s Edge at Disneyland Park in Anaheim, California, and at Disney’s Hollywood Studios in Lake Buena Vista, Florida, guests will find highly detailed Disney Cast Member costumes unique to each area and attractions throughout Black Spire Outpost, a village on the planet of Batuu. Cast Members in costumes from the Resistance (left) and First Order (right) will interact with guests in Star Wars: Rise of the Resistance, opening later this year.

Since the cast doesn’t have one uniform look, it could be even harder to discern cast from guest at first glance, even with name tags.

NBCUniversal has a similar policy, stipulating that guests are not allowed to wear “clothing or accessories that may create a false impression that visitors work for Universal.”

‘You don’t want the First Order to see you’

While these rules are a blanket security measure and a way for Disney to protect its brand, fans visiting Batuu have been disappointed that, after shelling out $125 on a set of robes, they are not permitted to wear them.

“95% of my motivation to buy Jedi robes just went away,” one Twitter user said. “I’m an adult with a full time job. When would I actually wear their expensive Jedi robes, if not at the park?”

At Black Spire Outfitters inside Star Wars: Galaxy’s Edge at Disneyland Park in Anaheim, California, and at Disney’s Hollywood Studios in Lake Buena Vista, Florida, guests will be able to mix and match clothing to create their own galactic style. (Source: David Roark | Disney Parks)

A big piece of Star Wars fan culture is cosplaying. Fans will spend hundreds of dollars creating the perfect costume of their favorite character or crafting one of their own design. They don these elaborate looks at comic conventions, fan events and even charity events.

For many, Galaxy’s Edge seemed like the perfect place to purchase authentic Star Wars attire and flaunt it in an immersive world.

It seems that not all employees in the park are heavily enforcing the no-robes rule.

“I experimented with wearing my Jedi robes all day today and walked near a lot of managers and security, and nobody’s enforcing the no-Jedi-robes rule,” Jenny Nicholson, a YouTube video maker and self-proclaimed amateur theme park fan, wrote on Twitter.

Employees that do spot guests in Jedi robes and want them to take them off have been spotted saying, “You don’t want the First Order to see you,” as a way of hinting that parkgoers shouldn’t be wearing the item. If the person doesn’t take the hint, the staff member has politely asked that the cloaks be removed.

There is also signage in Black Spire Outfitters near the robes that reiterates Disney’s costume policy.

“Cast members at shops politely ask that you not wear the costumes once you purchase them, but we did see plenty of ‘Disney bounders’ whose outfits may as well have been costumes,” Dan-O Florez, a Star Wars YouTuber, said. “So mileage may vary.”

While Disney has strict rules in all of its parks that guests are not allowed to don costumes, the company is encouraging older fans to wear outfits inspired by their favorite characters. This is called “Disney bounding.”

This trend was started around 2013 by blogger Leslie Kay. Kay was planning a trip to Walt Disney World and was so excited that she created a blog called “The DisneyBound.” Here, she shared outfits inspired by her favorite Disney characters using social commerce website Polyvore.

The style caught on and soon other Disney enthusiasts were creating their own character-inspired outfits.

Disney has embraced the Disney bounding trend, even collaborating with Kay on a list of style tips for creating character-inspired looks.

Be careful what you kitbash

Disney bounding isn’t the only way fans have been prepping for their trips to Galaxy’s Edge.

A number of fans have created their own phone and watch cases specifically for visiting Batuu using a method called kitbashing. Kitbashing is where you take bits and pieces from different model kits and put them together to create something else.

Kitbashing has been a bit part of the Star Wars fan culture for decades. The toymakers at Kenner used this crafting method to create the first prototypes of the original Star Wars toys back in the ’70s. Many of these original models were Fisher Price Adventure People figures painted or kitbashed to look like the characters from “Star Wars: A New Hope.”

The interactive apps at Galaxy’s Edge inspired fans to create special phone cases that look like datapads in the Star Wars films using odds and ends from Lego and other modeling kits.

YouTuber Florez warned that fans should be cautious when they are creating these cases. He said one security officer saw his phone case and he was asked to throw it away or bring it back to his car. Florez said his case had a bit of exposed wiring on the back and that was the reason he was told he could not bring it into the park.

“The only reason it got caught is because the security guards at the bag check and metal detectors liked it so much they called over their manager to see how cool it was,” Florez said. “Once he saw it, he had a concerned look on his face. He truly did feel bad for having to do that.”

Disney security’s rules require that if they are unable to identify an object they do not permit it into the park. They will ask the guest to either throw the item in question away or to take it back to their car or hotel.

Florez said the security guard explained that the day before they had someone throw away a battery charger because of exposed wires.

“They were all really nice about it and were just doing their job keeping us all safe, so I’m not upset over it,” Florez said of the security staff. “I just want others to be warned just in case they do ‘too good of a job.'”