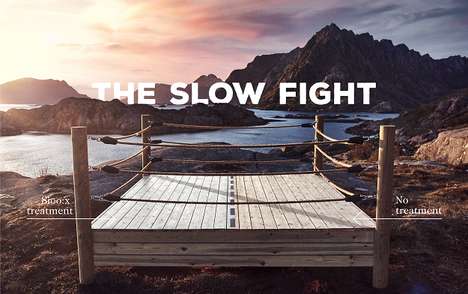 Sioo:x is Pitting Its Products Against Nature for ‘The Slow Fight’

As a continuation of the “world’s most boring billboard,” which was unveiled last year, wood protection brand Sioo:x is introducing The Slow Fight, which will unfold over more than a decade. Rather than pitting two people against one another, the brand is putting its product to the test against the elements. The “fight” is taking place on a custom-built boxing ring with a wooden floor that’s exposed to the harsh weather of Lofoten, Norway.

While one side of the floor is treated with the brand’s protective product, the other half remains untreated—which leaves an open invitation for competing brands to apply their product and see how it fares against Sioo:x’s.

The Slow Fight officially began on June 4th and is livestreamed for 24 hours a day online.