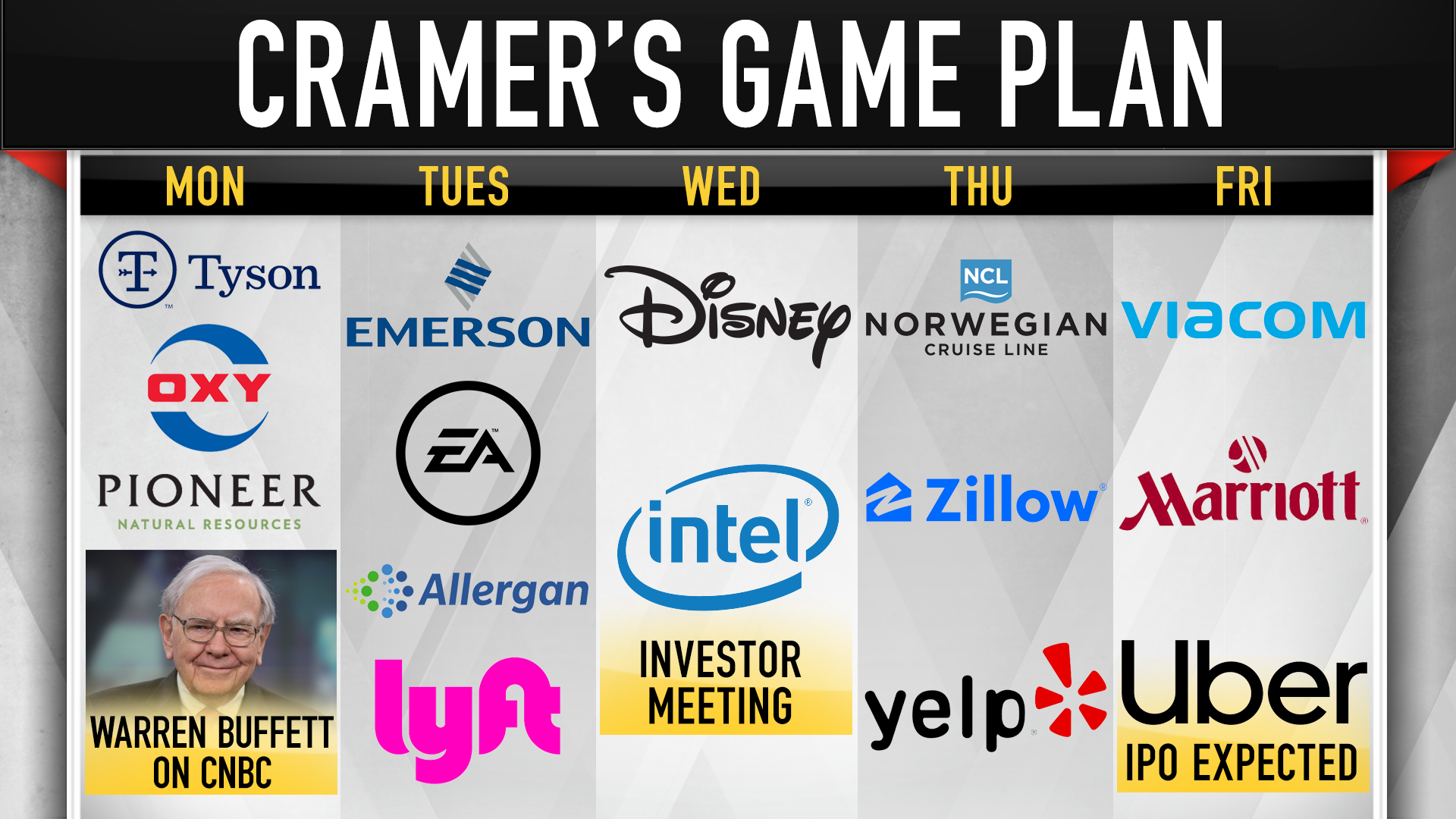 The red-hot market will be put to the test when Uber goes public next week, CNBC’s Jim Cramer said Friday.

Investors should be worried about froth — unsustainably high share prices — particularly in the IPO market because there is too much enthusiasm to buy stocks, he said, pointing to Beyond Meat’s second-day rally Friday after rocketing 163% on in its Thursday debut.

With an added 263,000 new non-farm payrolls last month and low inflation, Cramer said conditions are ideal for the Federal Reserve to maintain interest rates where they are — an encouraging note for the “Mad Money” host.

“We’ve got a runaway freight train of a market and I’d love to see the darned thing cool off for more than a session or two,” the host said. “It shouldn’t be this easy to make money because, trust me, periods like this one never last that long, and they almost.”

Here’s what Cramer has circled on his calendar in the week ahead:

Tyson Foods: The meat and poultry giant, which is investing in plant-based faux-meat alternatives, reports earnings before the bell.

“Their own fake meat comes out later this year and I think that they’ll tell us about it at length,” Cramer said. “Now you have to ask yourself: will that put the kybosh on Beyond Meat?”

Occidental Petroleum: Occidental reports its quarterly earnings after the bell. The Houston-based driller last month made a $76-per-share competing bid for Anadarko, which Chevron offered to buy for $33 billion in cash and stock.

“Unless Chevron comes back with a higher bid, I think OXY will get the prize,” Cramer said.

Emerson Electric: The electrical conglomerate will release its quarterly earnings before the market opens. Cramer said he expects Emerson to deliver a decent report, given the state of the world’s industrial economies.

“Emerson will tell the tale of the tape ahead of what may be the homestretch in the trade negotiations with China,” he said. “They have a lot riding on a potential deal because they do a ton of business with the People’s Republic. I’m expecting a good but not perfect quarter because while our economy is roaring, the rest of the world is not so hot.”

Allergan: The Botox maker plans to hold an earnings call before the bell. Cramer called it a beaten down stock. Sellers are concerned about the lack of new drug approvals, he said.

“I think it all comes down to their smash hit, their new battle royale game and I don’t know if that will be enough,” Cramer said. “I say don’t buy it.”

Lyft: The ride-hailing company will report its first quarterly report since going public.

“The good news: when a company comes public, the first quarter out of the chute tends to be strong,” Cramer said. “The bad news? Unless Lyft’s results are downright incredible, I figure shareholders will sell it to raise money so they can buy Uber.”

Disney: Cramer said don’t expect any fireworks when the film production house gives its latest earnings results at the end of the session.

“If you haven’t already bought any Disney, I would actually wait here, as there’s always somebody who will be disappointed by earnings in the wake of a monster run like this,” he said.

Intel: Intel will host an analyst meeting, which the host expects will be exciting. It will be a chance for the computer company to clear the air from its earnings call last week.

Norwegian Cruise: The cruise line might have a positive story to tell when it reports earnings in the morning, Cramer said.

“Stock’s right near a 52-week high, so … let’s hope it gets hit ahead of time … and then you can pull the trigger,” he said.

Zillow: The online real estate-turned-house flipping company, which recently shook up its leadership, reports earnings after the close. Cramer wonders if there will be any more restructuring announced.

Yelp: Yelp has an earnings call after the bell.

“After spending a lot of time in purgatory, Yelp seems to be coming back in style on the Wall Street fashion show. It could deliver a good number,” he said.

Viacom: The mass media conglomerate will present quarterly results before the market opens.

“I’m betting it will have a good quarter, but that’s not why people own it — they’re hoping for a merger with CBS and if we don’t get one, the stock’s gonna be left in the waste bin, even if the quarter is strong,” Cramer said.

Marriott: The hotel chain has an earnings call before the bell, which Cramer expects will be a solid report.

“More important, today we learned today that CEO Arne Sorenson has been diagnosed with stage 2 pancreatic cancer,” he said. “Arne says he’s going to work through the treatment. That’s terrific. I wish him wish him all the luck in the world.”

WATCH: Cramer delivers his game plan for next week

Investors must time portfolio managers to win in this market
‘We’re going to look at plant-based proteins’
To Top
error: Content is protected !!
Top