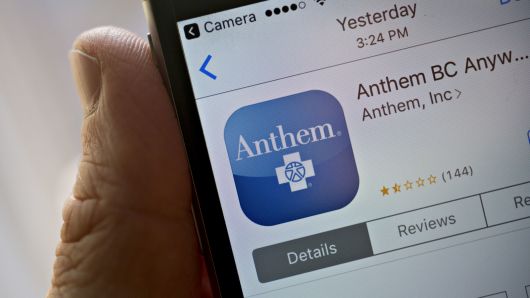 The Anthem Inc. Anthem Anywhere application is seen in the App Store on an Apple Inc. iPhone displayed for a photograph in Washington, D.C., U.S., on Saturday, April 21, 2018.

Anthem’s first-quarter profit beat Wall Street estimates on Wednesday as it reined in expenses, and the U.S. health insurer raised its earnings forecast for the year.

Shares of the Indiana-based company rose 2.7 percent to $257.39 before the opening bell.

Anthem, which operates Blue Cross Blue Shield plans in 14 states, also overhauled its pharmacy benefits business after years of relying on Express Scripts to handle those operations. Its new company, IngenioRx, is expected to be launched during the second quarter with the help of CVS.

Members in the company’s health plans rose by 1.2 million to 40.8 million, helped by growth in the government business that provides Medicare health plans for people aged 65 and older and Medicaid plans for the poor.

Anthem’s benefit expense ratio the percentage of premiums taken in that are paid out for medical services worsened to 84.4 percent in the quarter from 81.5 percent a year earlier, partly due to a one-year waiver of the health insurance tax in 2019. Analysts on average had expected 84 percent, according to IBES data from Refinitiv.

Excluding items, the company earned $6.03 per share, ahead of the average analyst estimate of $5.81.