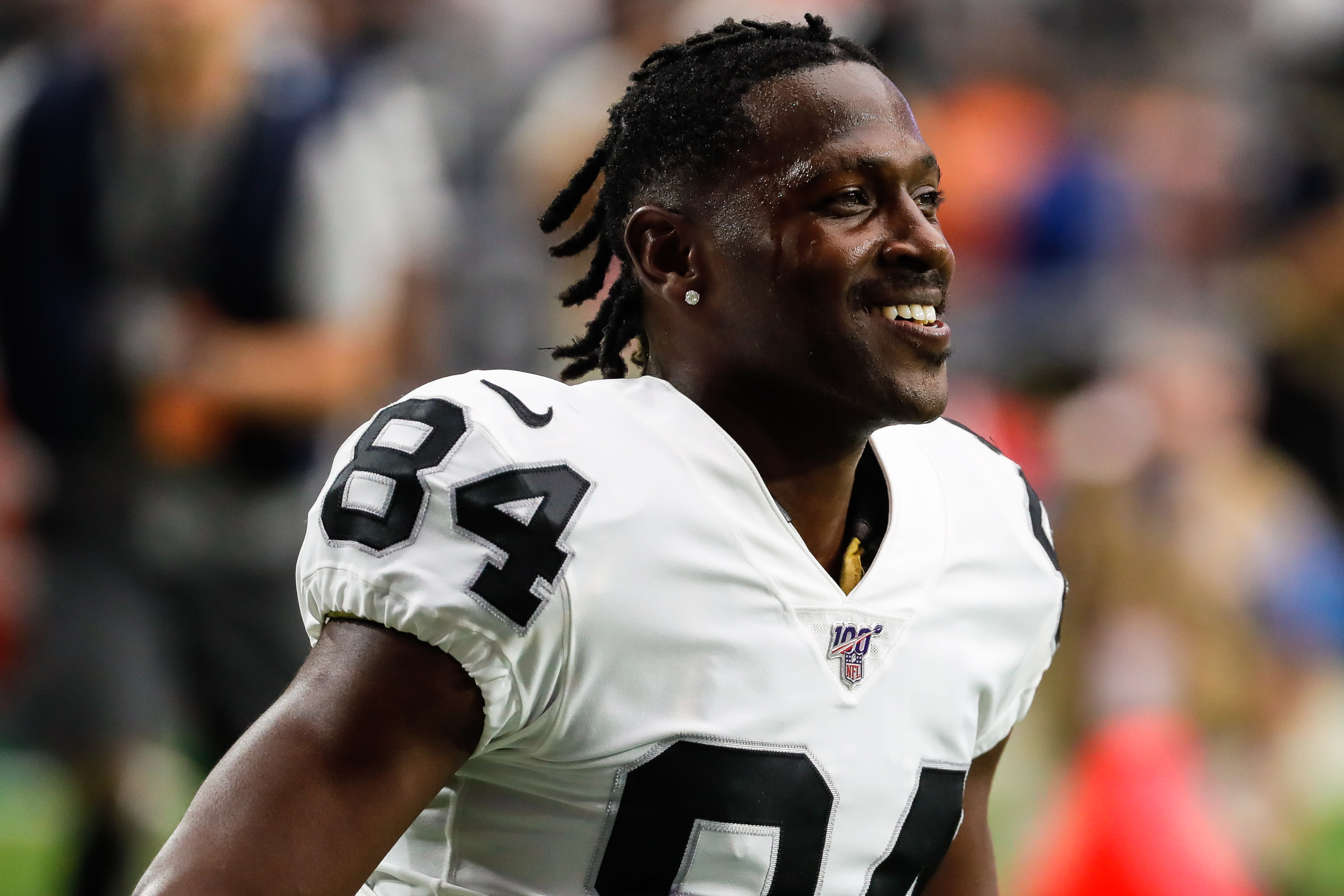 Oakland Raiders wide receiver Antonio Brown (84) smiles before the NFL preseason football game between the Oakland Raiders and the Arizona Cardinals on August 15, 2019 at State Farm Stadium in Glendale, Arizona.

And the Oakland Raiders did, bringing the NFL offseason’s most bizarre saga to an abrupt end before the star wide receiver had the chance to catch a meaningful pass in black and silver.

Just hours later, however, Brown had a new home.

“I’m not mad at anyone. I’m just asking for the freedom to prove them all wrong,” he said.

It marked the culmination of a back-and-forth that has consumed the team and much of the football world.

After an alleged altercation with General Manager Mike Mayock earlier this week, the Raiders indicated they were preparing to suspend and potentially let go of the star.

But Brown apologized Friday, with teammates saying they accepted it.

“We had a team meeting where Antonio addressed the team,” quarterback Derek Carr said. “We were up there with him, a couple of captains. We communicated back and forth when that was done we were all excited to move forward.”

Coach Jon Gruden suggested Brown could even start in Monday’s opener against the Denver Broncos.

But the drama didn’t stop there.

Brown then posted a video on YouTube late Friday that included audio of what appeared to be a conversation between him and Gruden, and which suggested all was perhaps not quite as well in Oakland as the Raiders were trying to make out.

Then came Saturday’s final escalation, and the news that Brown was gone.

The Raiders acquired Brown from the Pittsburgh Steelers in March for 3rd- and 5th-round draft picks, giving him a new contract and a hefty raise in the process.

He outstayed his welcome in Pittsburgh, but the Raiders had been counting heavily on Brown to spark an offense that was lackluster a year ago after Gruden returned to coaching from the announcing booth.

He featured heavily in this year’s edition of the show “Hard Knocks,” which was centered on the Raiders’ training camp.

Drama over Brown’s reluctance to wear an NFL-mandated helmet and his absence from the team after suffering a foot injury while undergoing cryotherapy preoccupied much of the series.

The video he posted to YouTube Friday night had more of a homemade feel.

It ends with Brown saying, “I’m more than just a football player, man. I’m a real person. It ain’t about the football. I know I can do that. I show you guys that on the daily. This is my life. Ain’t no more games.”

Not for the Raiders anyway.

2019 BMW 330i is good enough among sports sedans, but not great
Mark Mobius on investing in gold as central banks and Fed cut rates
To Top
error: Content is protected !!
Top