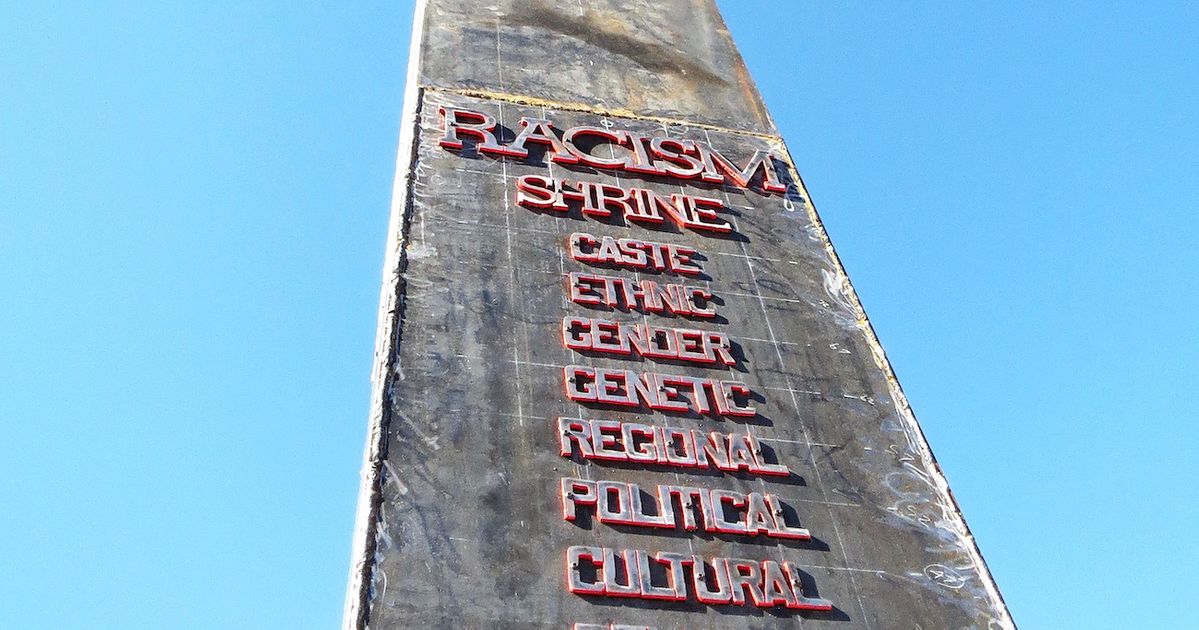 At the end of a year that has been marked by racial injustice and the fight against it, the Apache artist Bob Haozous has unveiled a monumental sculpture in Santa Fe, New Mexico, that addresses the “racist indoctrination of Western forces” on Indigenous culture, he says. Titled Racism Shrine (2020), the 48ft-tall steel pyramid lists the various injustices “that men inflict on other men”, according to Haozous, including “caste, gender, ethnic, regional, economic, cultural, political, religious, educational, institutional and environmental”.  The imposing sculpture is installed in Haozous Place, a sprawling sculpture park and museum devoted to the work of the artist’s late father, the renowned Modernist sculptor Allan Houser. But the piercing memorial dramatically contrasts with his father’s works, Haozous says, which often romanticised Indigenous life. The sculpture also aims to criticise the commercialisation of Indigenous culture, which has been forced to integrate with Western society through economic development, particularly via the arts. “Indigenous people have been taught that you can only survive in modern society if you make something that sells,” Haozous says. The Western market for Indigenous art also “often neglects the philosophical meaning of being Indigenous”. Haozous, who graduated with a degree in sculpture from the California College of the Arts in Oakland in 1971, says that most academic programmes geared towards Indigenous artists are “primarily vocative”, and driven by the historical notion that “the purpose of making art is to satisfy the needs of the public”. He recalls that his father, who was a professor at the Inter-Mountain Indian School in Brigham City in Utah and later at the Institute of American Indian Arts in Santa Fe, once asked a student to describe what he saw on a piece of stone. “The man said he saw a dollar sign,” Haozous says. “Indigenous people are more than a dollar sign, but we have fallen in love with the god of Western man, which is money,” Haozous says. “To think that I could carve a buffalo—or paint a beautiful nude or a landscape—to make money just bores me. Artists should aspire to make more than decorative fluff, and to inspire people to ask questions and find meaning.”

Haozous has not exhibited work alongside his father in decades, recalling past instances where gallerists claimed his own art “killed the sales”, he says. However, the juxtaposition of Houser’s idealised depictions of Indigenous life and this new stark but meditative work “provides a positive balance”, Haozous says, that is especially pertinent in the wake of the racial justice protests of this year, which prompted the toppling and removal of monuments and memorials devoted to European colonists and white supremacists. “After years of not showing work with my father because of the economics of the family business, I felt compelled to do it because this year feels like the first time that we are having an open discussion about race, capitalism and democracy,” Haozous says. “At 77 years old, I’m supposed to be sitting on my patio drinking a beer, making watercolours of flowers, accepting awards, patting little kids on the head and so on, but I would much rather be in my studio making things that don’t white-wash the truth, or that are simply marketable for the Western market.”“It’s time to bring to light that most Native people do not live in the version that we’re so often painted in—we are people who have suffered tremendous problems, and those problems should be exposed,” he says. In addition to continuing in his father’s footsteps as an artist, Haozous is also the director of the Allan Houser Foundation.

Huge historic tobacco factory in Athens to be renovated into cultural space by 2021
London’s Southbank Centre re-hires 40 workers who lost their jobs in the wake of Covid-19
To Top
error: Content is protected !!
Top