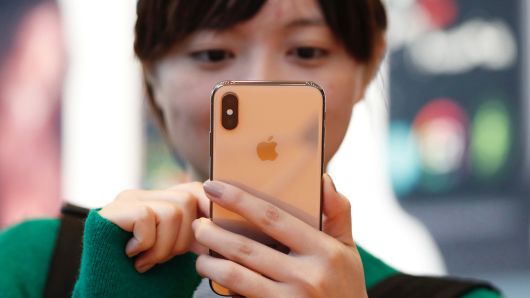 A customer looks at Apple’s new iPhone XS after it went on sale at the Apple Store in Tokyo, Japan, September 21, 2018.

Apple could release iPhones in 2020 equipped with 5G modems, according to research notes from TF International Securities analyst Ming-Chi Kuo.

The modems could be provided by both Qualcomm and Samsung, according to the research. Access to 5G modem parts is one major reason why Apple settled a bitter legal battle withQualcomm last week.

A 5G-equipped iPhone with a faster and more reliable cellular internet connection could give consumers a reason to upgrade from older models as iPhone sales growth stalls.

Apple typically releases new iPhone models in September, so the 5G iPhone would not be released until at least September 2020. The iPhones released this September will most likely support current-generation LTE networks instead.

We expect Apple will likely adopt 5G baseband chips made by Qualcomm (focus on mmWave markets) and Samsung (focus on Sub-6GHz markets) for lowering supply risk, reducing costs and having better bargaining power.

Kuo said that the introduction of a 5G iPhone could spur a wave of upgrades and purchases, especially for high-end models:

Apple said it sold more than 217 million iPhones in its fiscal 2018, the last year that figures are available. Historically, Apple’s best year in terms of iPhone shipments was 2015, with over 231 million. The company said in December that it would no longer share unit shipments because they are less relevant to the investor than they were before.

Kuo, who is well-known for describing Apple products before they are released, targets his research at investors in the companies that supply parts to Apple and other consumer electronics companies. He said that 5G could necessitate new designs for many iPhone parts, starting with the modem or “baseband chip,” but also including its antenna, RF-front end and mainboard.

Kuo also predicted in a separate note Monday that Apple is redesigning the printed circuit boards included in 2019 iPhone models using a new kind of material to clear out space for a bigger battery.

Home sales fall 4.9% in slow start to spring buying season
Beyond Meat looks to raise $183.8 million in its IPO
To Top
error: Content is protected !!
Top