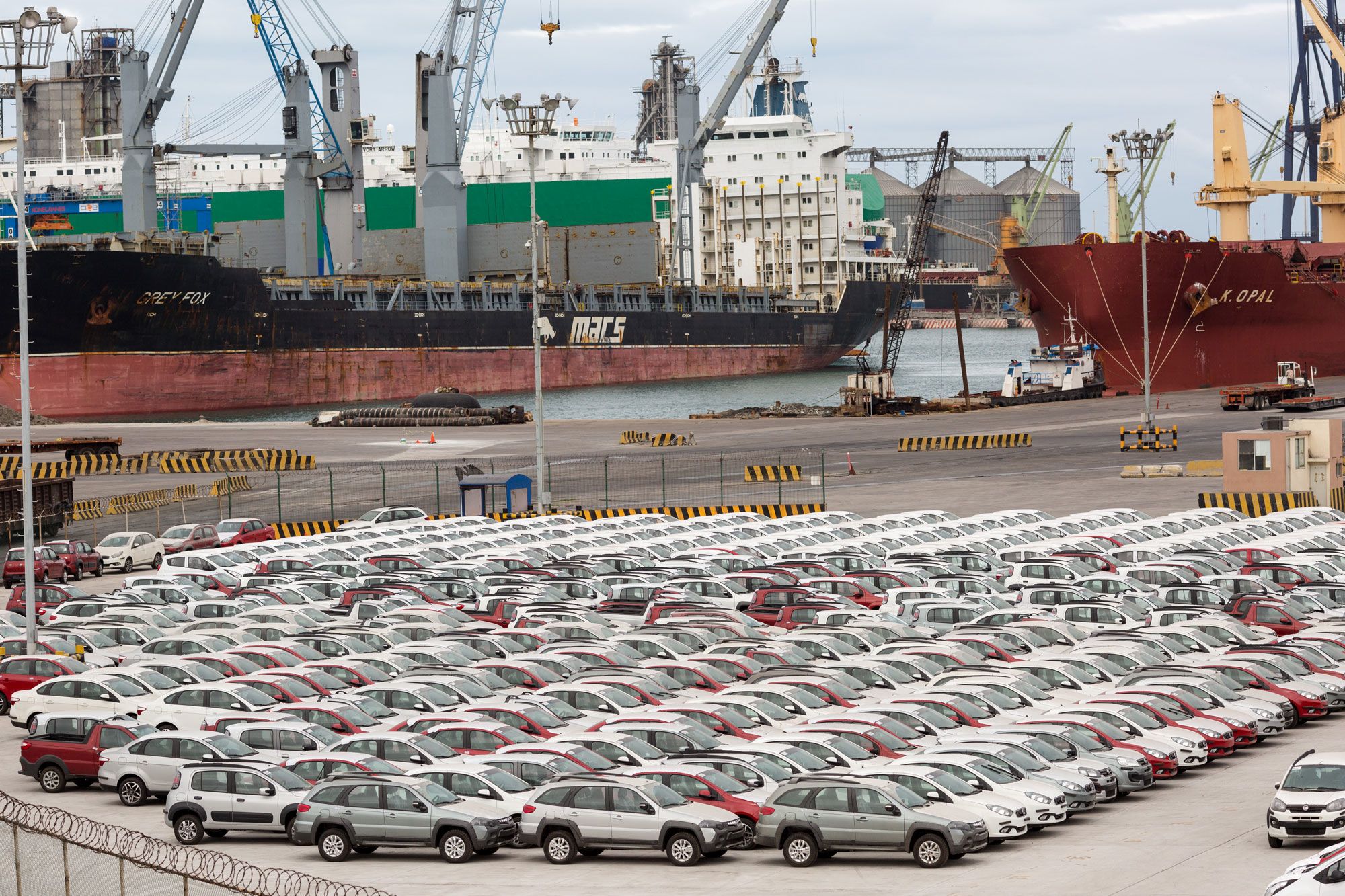 Vehicles stand in a lot before export at the Port of Veracruz in Veracruz, Mexico.

Republicans, including Senate Majority Leader Mitch McConnell, have begun publicly speaking out against the tariffs on Mexican goods that President Donald Trump plans to put in place next Monday.

It’s far from clear whether Trump will back off on his plan, which would impose a 5% tariff on autos imported from Mexico starting June 10 that rises to 25% by October unless Mexico curbs illegal immigration at the southern border. The rare split between the president and the GOP was taken as good news by some within the U.S. auto industry which would find itself in the crosshairs were the tariffs to go into effect.

“Right now, we’re hoping there will be a resolution” that will prevent the tariffs from taking effect, Steve Kiefer, the head of global purchasing for General Motors, said in an interview Tuesday.

Nearly $100 billion in Mexican automotive goods, including $93 billion in vehicles and more than $6 billion in parts, flowed into the United States last year. GM was the largest importer of Mexican-made vehicles, a total of 666,765 last year, along with parts, such as wiring harnesses, used on virtually all of the cars, trucks and crossovers assembled at U.S. plants, according to Mexico’s Instituto Nacional de Estadística y Geografía, or INEGI.

That has led many suppliers to frantically begin developing alternative sourcing plans, though Kiefer said he is “asking all of our suppliers not to do anything and be calm.”

But that isn’t easy, said Carla Bailo, the president and CEO of the Center for Automotive Resources. Even if the Mexican tariffs are scrubbed, automakers and their suppliers are struggling to figure out how to operate under a president who has described himself as the “tariff man,” and is threatening to ignite new trade battles even as his one with China escalates.

“Every morning, we read the tweets and have to re-do our plans,” said CAR’s Bailo, who spent years working for Nissan and other automakers. “It’s a tough way to do business,” she added, especially in an industry that typically that has to plan out years ahead for everything from products to production sourcing.

Only a few weeks ago, the industry thought it had won a reprieve when Trump agreed to roll back tariffs for aluminum and steel imported from Canada and Mexico. Though the metals still face tariffs when imported from other countries, most steel and aluminum have been sourced from North America, according to a spokesperson for Ford, which last year took a $1 billion hit to its bottom line from the duties.

“We are pleased that the U.S., Canada and Mexico have reached an agreement that will help us as a region,” Joe Hinrichs, Ford’s president of automotive operations, said in an interview last month.

The industry also appeared to dodge another bullet when Trump decided to delay for up to six months making a decision on how to respond to a Commerce Department study on automotive imports. It concluded that foreign-made cars and car parts constitute a threat to national security, something that could be used to enact tariffs of up to 25%.

But there is growing concern, said CAR’s Bailo, that “the president just kicked the can down the sidewalk,” and is using the delay as “leverage” in ongoing trade talks, particularly those with Europe and Japan.

“It is sending a signal to foreign manufacturers” and their governments that the U.S. wants fewer imports and more local production, said one senior auto executive in Detroit. He asked not to be identified for fear of angering Trump. But he warned that the threat of new trade wars and the uncertainty that this raises, is creating havoc at U.S. automakers.

The industry is already struggling to deal with the escalating battle between the U.S. and China, which supplies a wide range of car parts for use on American assembly lines. Currently, only a handful of Chinese-made vehicles are sold in the U.S., including a Volvo sedan and the Buick Envision.

GM had sought an exemption for the Envision SUV, one of Buick’s most popular models, but the U.S. Trade Representative’s office denied the request last month, the automaker has confirmed. Sales of the Envision are down 21% this year, though it is unclear if the tariffs contributed to that decline.

So far, the industry has tried to contain the impact of those tariffs the administration has enacted by declining to pass most of the higher costs on to consumers. But that can only happen for so long, according to a number of industry executives. It would become particularly difficult if Trump follows through on his Mexico threat.

Tariffs are based on the so-called freight-on-board price of a vehicle when it rolls off the assembly line. A low- to mid-range Silverado that typically sells for around $40,000 in the U.S., would carry an FOB price of about $30,000, according to AutoTrends Consulting analyst Joe Phillippi. A 5% tariff would add $1,500 in additional duties under Trump’s current plan, climbing to $7,500 by October when the tariffs are scheduled to reach 25 percent. On some products, such as the Audi Q5 SUV that is produced entirely in Mexico, meanwhile, the duties alone could reach more than $10,000 by October.

Even on vehicles assembled in the U.S., prices could still rise by hundreds or even thousands of dollars, industry officials have said, because of the common use of Mexican-made parts, such as the wiring harnesses used in about 70% of the vehicles produced at American plants, according to data compiled by CAR.

Under the North American Free Trade Agreement the industry had developed “a well-tuned supply base that would have to change on short order,” said GM global purchasing chief Kiefer. In reality, he warned, it would be difficult to shake that network up anytime soon.

Complicating matters, observers now have warned that the Mexican tariffs Trump is threatening to implement could short-circuit Congressional efforts to pass the new USMCA trade agreement that was to replace NAFTA.

The various trade battles couldn’t come at a worse time for the auto industry. Sales are down more than 2% for the first five months of the year and are expected to decline to 16.9 million, marking only the second downturn since the end of the Great Recession.

Rising prices are catching some of the blame, with LMC Automotive, Edmunds and other research firms estimating American motorists spent an average of around $34,000 on their new vehicles in May, near the all-time record.

Should the industry be forced to pass on new tariffs, the impact will be significant, warned CAR’s Bailo. Not only will some buyers either put off purchasing a vehicle or downsize their choices, she said, but “There are going to be an awful lot of cars that won’t be able to be sold here anymore.”

That would be particularly true of products like the Mexican-made Mazda3 which already carries such a small profit margin that it is barely viable.

While some supporters of the trade wars might be pleased to see this happen, it won’t be just import models that are affected. Plenty of vehicles assembled in the U.S. could be impacted because of their dependence upon foreign parts. Toyota, for example, has warned that a Camry assembled in Kentucky could jump by about $2,000 in price if tariffs were placed on Japanese parts and components.

“We believe that tariffs of this kind are a tax on the U.S. consumer and will result in higher prices and also threaten job growth,” the Volkswagen Group said in a statement e-mailed to CNBC. The company had planned to expand its big assembly plant in Tennessee by adding the production of two new battery-electric vehicles there. But they would rely on parts from Europe, among other places and, the company added, its plans “would be impaired by restrictive changes to trade.”

Even now, “You’re seeing a lot of companies curbing spending” as they begin to cope with the sales downturn and worry about what Trump’s trade strategy might mean, added CAR’s Bailo. The danger for the administration, she added, is that this could “backfire” and actually cost American manufacturing jobs.