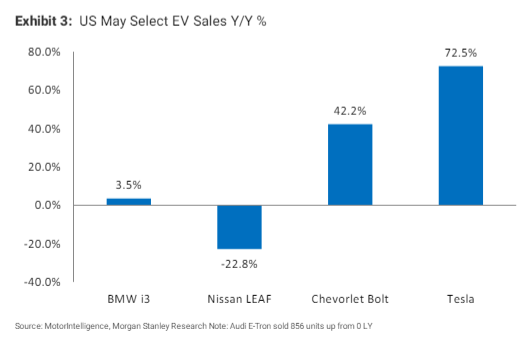 Workers assemble cars on the line at Tesla’s factory in Fremont. David Butow (Photo by David Butow/Corbis via Getty Images)

A key metric for Tesla’s sales bounced back in the spring after a disappointing first quarter, but the company will need consistent strong performance to return its stock back to levels seen earlier this year.

“More Model 3s were registered in April and May than during all of the first quarter,” JMP Securities analysts Joseph Osha and Hilary Cauley wrote in a note to investors. JMP increased its estimate for Model 3 deliveries for 2019.

JMP also updated its estimates for Tesla second quarter, as well as the year ahead. “It is evident that Tesla’s Q2 volume should recover significantly from Q1,” Osha and Cauley said.

The month of May saw Tesla continue “to extend its lead vs. a still-small group of true [electric vehicle] competitors,” Morgan Stanley analyst Adam Jonas wrote in a note to investors on Wednesday. Jonas is widely followed on Wall Street for his thoughts on both the auto industry and electric vehicles, especially Tesla.

Jonas’ note comes after he warned investors that Tesla shareholders should not expect a big tech company to bail out Elon Musk’s automaker, even with the stock down more than 40% this year. Jonas said on a call with investors that “Tesla is not really seen as a growth story” and currently seems more “like a distressed credit and restructuring story.”

Nontheless, Tesla increased total U.S. sales in the month of May by 73% compared to last year, according to data from Motor Intelligence. Meanwhile, sales climbed 39% for competing electric vehicles from Audi, BMW, Jaguar, Chevrolet and Nissan. Morgan Stanley also noted that Tesla’s estimated total U.S. sales of 11,300 vehicles in May was 2.6 times the combined total of its competitors’ EV offerings — up from 2.1 times last year.

Morgan Stanley: Tesla sales in U.S. up 73% from last May

Morgan Stanley forecasts Tesla will deliver between a range of 360,000 and 400,000 vehicles this year, which Jonas said represents “an increase of approximately 45% to 65% compared to 2018.” Meanwhile, JMP decreased its estimate for Tesla’s 2019 deliveries “very slightly to 378,900 units from 379,600,” noting steadily increasing volume in the lower priced Model 3 at the same time as declines in the higher end Model S and Model X vehicles.

Morgan Stanley has an equal weight rating on Tesla shares with a price target of $193.60. JMP has a market outperform rating and lowered its price target on Tesla to $347 a share from $369 a share.

How the Mega Millions and Powerball jackpots got so big
Automakers wait and worry as opposition to Mexican, other tariffs mounts
To Top
error: Content is protected !!
Top