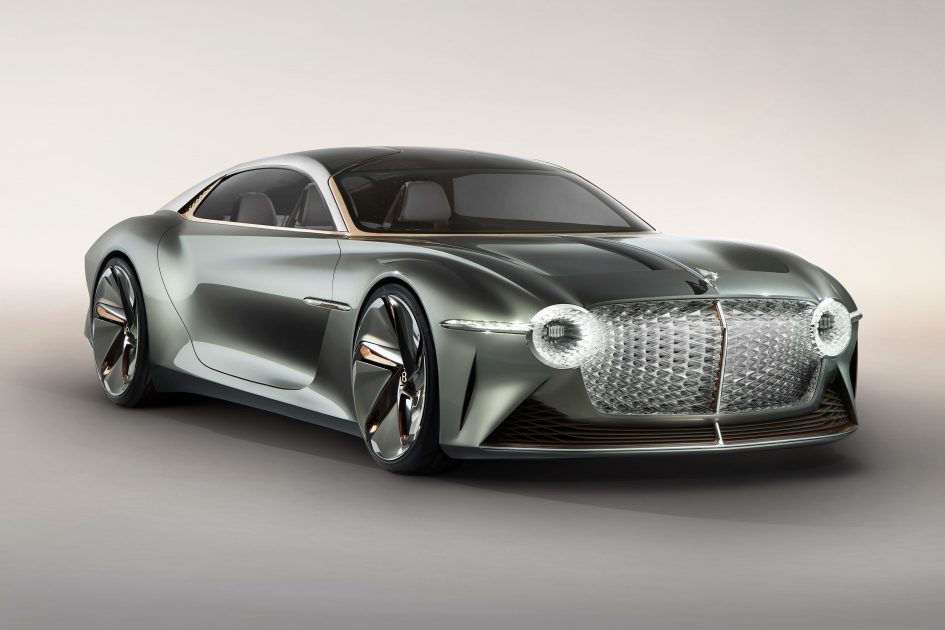 Bentley is celebrating its 100th anniversary by unwrapping a new prototype, the EXP 100, an all-electric, eco-friendly concept car the British automaker calls “the physical embodiment of the future Bentley brand.”

“The Bentley EXP 100 GT represents the kind of cars we want to make in the future,” said design chief Stefan Sielaff, in a new release ahead of the EXP 100’s formal debut Wednesday. “Like those iconic Bentleys of the past, this car connects with its passengers’ emotions and helps them experience and safeguard the memories of the really extraordinary journeys they take.”

While it retains classic Bentley cues, starting with the “Flying B” hood ornament, the EXP 100 marks a significant shift from the sort of staid and heavy products long associated with the brand. For one thing, it adopts an all-electric powertrain with an estimated range of about about 440 miles per charge and can operate in either autonomous or manual mode. The concept car also introduces “leather-like” textiles, sustainable woods and paint made from recycled rice husks.

Bentley has undergone some massive changes since splitting off from long-time sibling, Rolls-Royce two decades ago. Now the pinnacle brand for parent Volkswagen, it’s broadened its lineup with products such as the Flying Spur, Continental GT as well as the Bentayga, the SUV that is now its biggest seller.

Bentley sales are up nearly tenfold since 2003, selling 9,560 vehicles last year, although demand is down from the 2016 peak of 11,300. The EXP 100 is meant to set the stage for the sort of products that Bentley hopes will kick-start demand again.

Like other high-line luxury brands, it faces numerous challenges, including new global emissions and fuel economy mandates, such as China’s New Energy Vehicle, or NEV, standard that encourages buyers in Bentley’s largest market to shift to zero-emission vehicles. Bentley has only partly addressed that with the plug-in hybrid version of Bentayga.

Going forward, it’s expected to invest heavily in battery propulsion, like the hybrid option package for Bentayga, as well as all-electric models. The EXP 100 gives a broad hint of the driveline system Bentley’s next-generation sedans, coupes and SUVs will use. Motors on both the front and rear axles will provide an electric all-wheel-drive system with torque vectoring – a technology that helps a car steer through tight corners by shifting power to its outer wheels.

There’s no pricing information for the EXP 100, but the cheapest Bentley on the market right now starts at just under $200,000 with higher-end models with all the upgrades pushing prices for some over $1 million.

By tapping into developments led by parent VW, Bentley anticipates its batteries will be lighter and more energy-dense, meaning greater range while also reducing the overall weight of the vehicle. It also plans to shift from heavy steel to aluminum and other lightweight materials that can further enhance both range and performance. The EXP 100 is estimated to have a top speed of 186 mph and to be able to launch from 0 to 100 kmh, or 62 mph, in just 2.5 seconds —which would make the concept its fastest street-ready model Bentley ever.

Though measures 228 inches, nose to tail, or nine inches longer than Bentley’s current flagship vehicle, the Mulsanne, the EXP 100 is 1,800 pounds lighter at 4,180 pounds.

The EXP is intended to operate in both manual mode, “for when one wishes to enjoy the thrill of driving,” the carmaker said, or in fully autonomous mode. That technology is still in its infancy. Near-term, Bentley products — like those of other VW Group brands — are expected to begin phasing in more and more advanced, semi-autonomous driving systems.

The new Bentley concept, as much as anything, is intended to showcase new technologies, as well as the brand’s shifting approach to interior design, company officials told CNBC. That includes using sustainable alternatives, like synthetics claimed to mimic the look and feel of traditional, luxury materials. That doesn’t mean phasing out leather and wood entirely. The EXP 100 features Copper Infused Riverwood, “a sustainable wood from naturally fallen trees that has been preserved for 5,000 years in peat bogs, lakes and rivers,” Bentley noted.

The EXP 100 uses artificial intelligence in a number of ways, among other things, pairing it with biometric seat sensors that can control cabin temperature, seat position and even tell when a driver might be getting drowsy. Integrated into the car’s Amazon Alexa-style voice assistant, the system can even track what a passenger is looking at and display information about what they’re seeing outside the vehicle.

Though there are no plans to put the gull-winged EXP 100 into production, Bentley Chairman Adrian Hallmark noted that many features found on the concept vehicles will start appearing on next-generation models as they roll out over the coming decade.