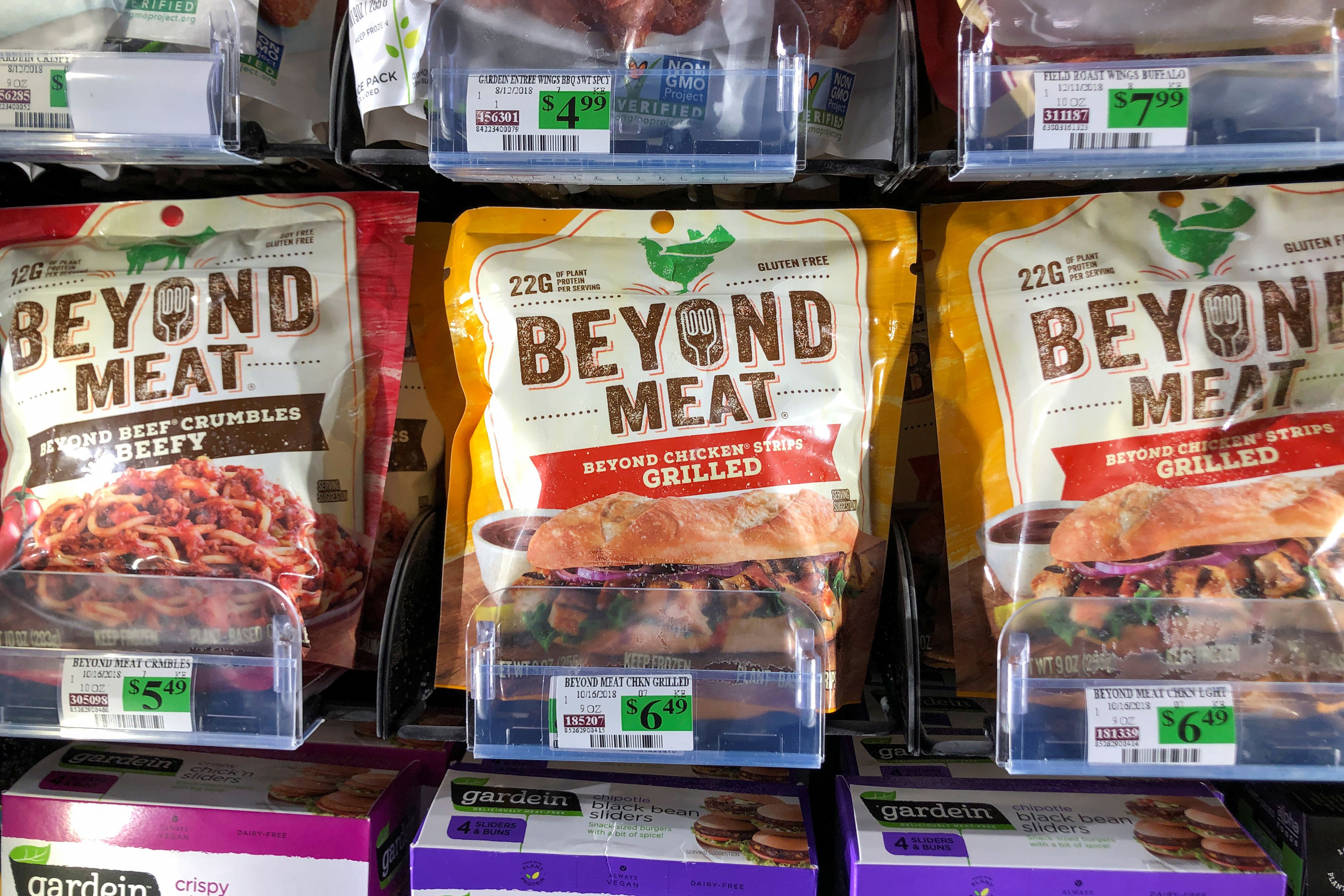 Beyond Meat topped analysts’ expectations in its first quarterly report since going public, and predicted that its revenue will more than double in 2019 as demand from existing and new customers continues to grow.

Shares of the company soared as high as 23% in after-hours trading.

“We’re being very conservative and viewing this as a floor,” CEO Ethan Brown told analysts on a conference call about its full-year outlook.

On a pro forma basis to adjust for the conversion of stock warrants, Beyond reported a loss of 14 cents per share for its first quarter.

Net sales rose 215% to $40.2 million, topping expectations of $38.9 million, according to a survey of analysts by Refinitiv. Executives attributed the revenue growth to increased sales of the Beyond Burger and greater demand from new and existing customers.

The company discontinued its frozen chicken strips during the quarter, causing a decline in revenue for its frozen products. In total, grocery store sales accounted for $19.6 million of its sales this quarter. Sales to restaurants like Carl’s Jr. and Del Taco made up $20.6 million of its revenue.

Discounts set the company back $3.1 million during the quarter, up from $1.6 million a year ago.

Beyond is forecasting full-year revenue will be higher than $210 million. Wall Street was anticipating that its 2019 revenue would be $205 million.

The company reported a net loss of $4.75 per share in 2018 on revenue of $87.9 million. While it declined to provide a outlook for its annual net loss or any individual quarters, it said it expects its second and third quarters to be its busiest.

Beyond Meat surged more than 160% in its first day trading on the public markets and has now soared nearly 300% above its initial public offering price, giving the company a market value of $5.8 billion.

Investors have been drawn by the potential for increased demand for meat alternatives, a category that is growing rapidly and will soon become more crowded. Nestle’s Sweet Earth brand will launch its own plant-based burger in the fall. One of Beyond’s early investors, Tyson Foods, sold its stake in the company prior to its IPO in order to create its own version.

“I’m very focused on grabbing as much land as I can as we have this leadership position,” Brown said.

Beyond has marketed its products not only to vegetarians and vegans, but also to consumers looking to reduce their meat intake for health or environmental reasons. Euromonitor estimates that the market for plant-based meat substitutes was $1.44 billion last year and will grow to $2.50 billion by 2023. Last year, Beyond Meat made up only 2.1% of the U.S. meat alternative market, according to Euromonitor data.

As rival Impossible Foods has faced shortages amid soaring demand for its plant-based patties, some smaller restaurant operators have switched to Beyond Burgers. In 2017 and 2018, Beyond faced similar struggles but has since made investments to address its ability to meet demand.

“We feel very strongly that we have solid capacity that it is in excess of our 2019 and [2020] forecast,” Brown said.

He also told analysts that he does not see any material or manufacturing obstacles that would keep Beyond Meat from working with the largest global fast-food chains, given the right amount of time and structure.