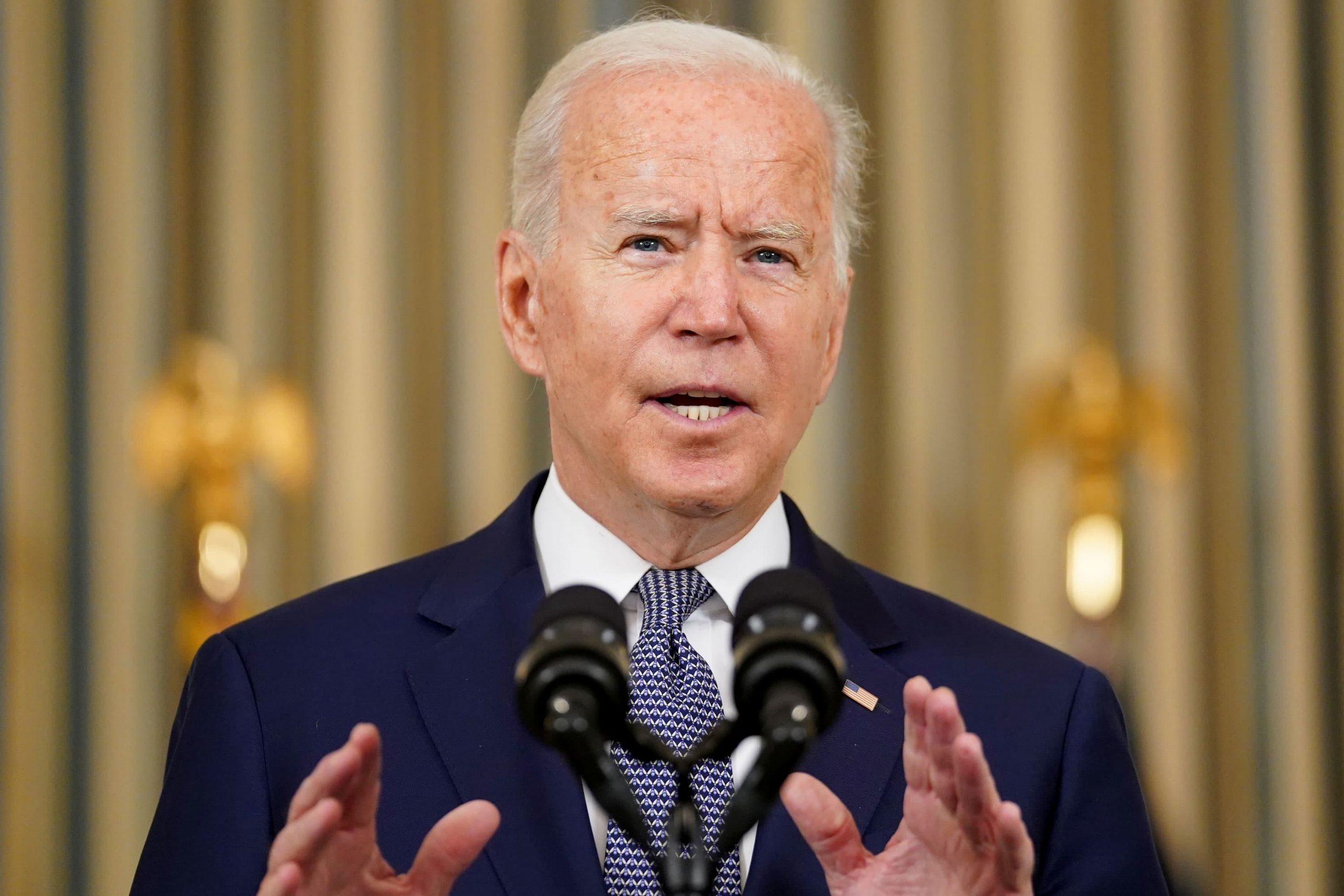 U.S. President Joe Biden delivers remarks on the end of the war in Afghanistan in the State Dining Room at the White House on August 31, 2021 in Washington, DC.Chip Somodevilla | Getty ImagesPresident Joe Biden on Friday blamed the coronavirus pandemic for a surprisingly weak jobs report, calling out Americans who have still not gotten vaccinated even amid the spread of the highly infectious delta variant.Nonfarm payrolls in August increased by just 235,000, the Labor Department reported, far below the 720,000 new hires that economists predicted. The report showed the smallest monthly jobs total since January.”There’s no question the delta variant is why today’s job report isn’t stronger,” Biden said at the White House shortly after the data came out.Biden, who has spent much of his first leg in the White House focused on the pandemic, said, “We need to make more progress in fighting the delta variant.”CNBC PoliticsRead more of CNBC’s politics coverage:Despite the government’s ongoing vaccination push, tens of millions of eligible Americans still have not received even a single dose of a Covid shot. Biden said that group is prolonging the pandemic and contributing to anxieties that impact the economy.”This is a continuing pandemic of the unvaccinated,” the president said. “Too many have not gotten vaccinated, and it’s creating a lot of unease in our economy and around our kitchen tables.”Less than 64% of U.S. adults, roughly 175 million people, are fully vaccinated, according to data from the Centers for Disease Control and Prevention.Pfizer-BioNTech’s two-shot Covid vaccine, the only one to receive full approval from the Food and Drug Administration, is only available for people 16 and older. Kids ages 12 to 15 are still able to get Pfizer’s shot on an emergency use basis.Biden acknowledged the weak numbers in the report — “I was hoping for a higher number,” he said. But he nevertheless defended the economic progress that the U.S. has seen under his administration.”What we’re seeing is an economic recovery that’s durable and strong. The Biden plan is working. We’re getting results.”The president highlighted the decrease in the unemployment rate, down to 5.2% in the latest report from 6.3% in January.He also teased new steps the White House would take next week to combat the delta variant, suggesting that the actions would focus on protecting schools, businesses, families and the economy from the virus.The spread of the delta variant has led to another huge surge in Covid cases, hospitalizations and deaths around the country, with Southern states hit especially hard. Florida has a higher Covid hospitalization rate than anywhere else in the U.S., and this week broke its record for the largest single-day rise in deaths, with 1,338 reported Thursday.Some experts are predicting another spike is in store for the Northeast.”Now whether we see a wave of infection as dense and severe as the South, I don’t think that’s going to be the case because we have a lot more vaccination; we’ve had a lot of prior infection, which we also know is protective,” Dr. Scott Gottlieb, who served as FDA chief for two years under then-President Donald Trump, told CNBC earlier Friday.”But we will probably see a build in cases here in the Northeast,” he said. “I don’t think that we’re done with this.”