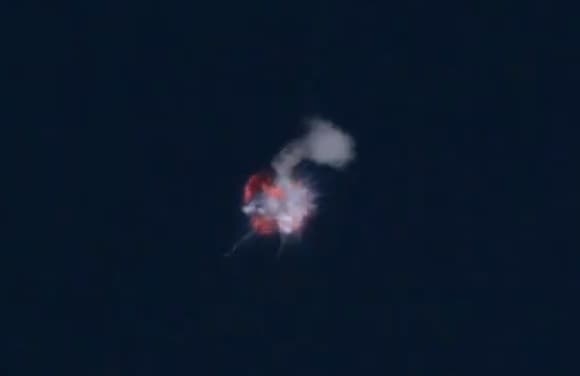 The company’s first Alpha rocket explodes during its orbital launch attempt on Sept. 2, 2021.Firefly AerospaceSpace company Firefly launched its Alpha rocket for the first time on Thursday evening, but the vehicle had suffered an issue a couple minutes into ascent and exploded in the sky above the Pacific Ocean off the coast of California.Firefly was attempting to reach orbit, and its Alpha rocket went supersonic moments before the failure, according to the company’s mission control audio. The rocket launched from the SLC-2 complex at Vandenberg Space Force Base.”Alpha experienced an anomaly during first stage ascent that resulted in the loss of the vehicle. As we gather more information, additional details will be provided,” the company said in a tweet.Standing at 95 feet tall, Firefly’s Alpha rocket is designed to launch as much as 1,000 kilograms of payload to low Earth orbit – at a price of $15 million per launch. This puts Firefly in the “medium-lift” category of rockets, pitting it against several other companies including Richard Branson’s Virgin Orbit, ABL Space and Relativity Space.Firefly Aerospace’s Alpha rocket stands on the launchpad at Vandenberg Space Force Base in California on September 2, 2021.Andrew Evers | CNBCThe first Alpha mission, called DREAM (or Dedicated Research & Education Accelerator Mission) and launching from Vandenberg’s SLC-2, was a test flight and carried multiple items, with 11 technical payloads. The technical payloads include: A Teachers in Space cube satellite (which is testing a Villanova blockchain experiment), Purdue University’s FireSail, the Hawaii Science and Technology Museum’s small satellite, six FOSSA picosatellites, a demonstration spacecraft for Benchmark Space Systems, and the Space Electric Thruster Systems propulsion demonstration spacecraft.Firefly, with a valuation of more than $1 billion, has raised more than $175 million to date. The company is best known for its launch business, with the Alpha and the planned Beta. But it is also working on a lunar lander called Blue Ghost and a space utility vehicle – also known as a “space tug” — to transport satellites into unique orbits after a launch.The company had planned to launch its first Alpha rocket in December, but CEO Tom Markusic told CNBC earlier this year that Firefly “ran into some problems with readiness of the launch site” at Vandenberg Air Force Base in California, and also had a significant delay from a supplier of the rocket’s flight termination system – a key piece required for the rocket to launch. Markusic worked at Elon Musk’ SpaceX, Jeff Bezos’ Blue Origin and Branson’s Virgin Galactic before Firefly.Become a smarter investor with CNBC Pro.Get stock picks, analyst calls, exclusive interviews and access to CNBC TV. Sign up to start a free trial today.