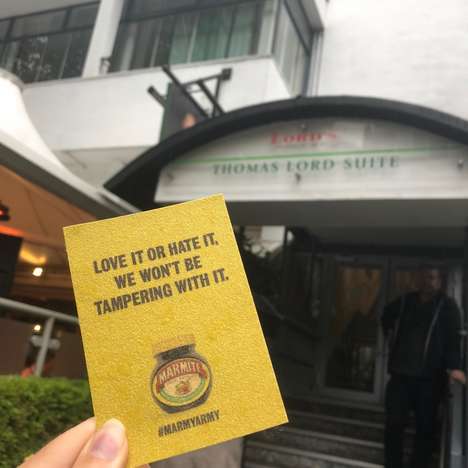 Marmite originally launched its iconic ‘Love it or Hate it’ campaign in 1996, which plays on the fact that its breakfast spread has a polarizing effect on consumers — to build on this notion, the brand recently launched a new, tongue-in-cheek campaign using branded sandpaper that modernizes its original slogan.

Marmite distributed bright yellow strips of sandpaper just in time for the second Ashes Test in the Lords’ Cricket Ground match featuring England and Australia. The branded sandpaper states ‘love it or hate it, we won’t be tampering with it. #MarmyArmy’ and references the ‘Sandpapergate’ Australian cricket scandal in March 2018.

The humorous new promotion is part of the brand’s wider activation that includes Marmite jars and badges being distributed at Lords’ Cricket Ground.