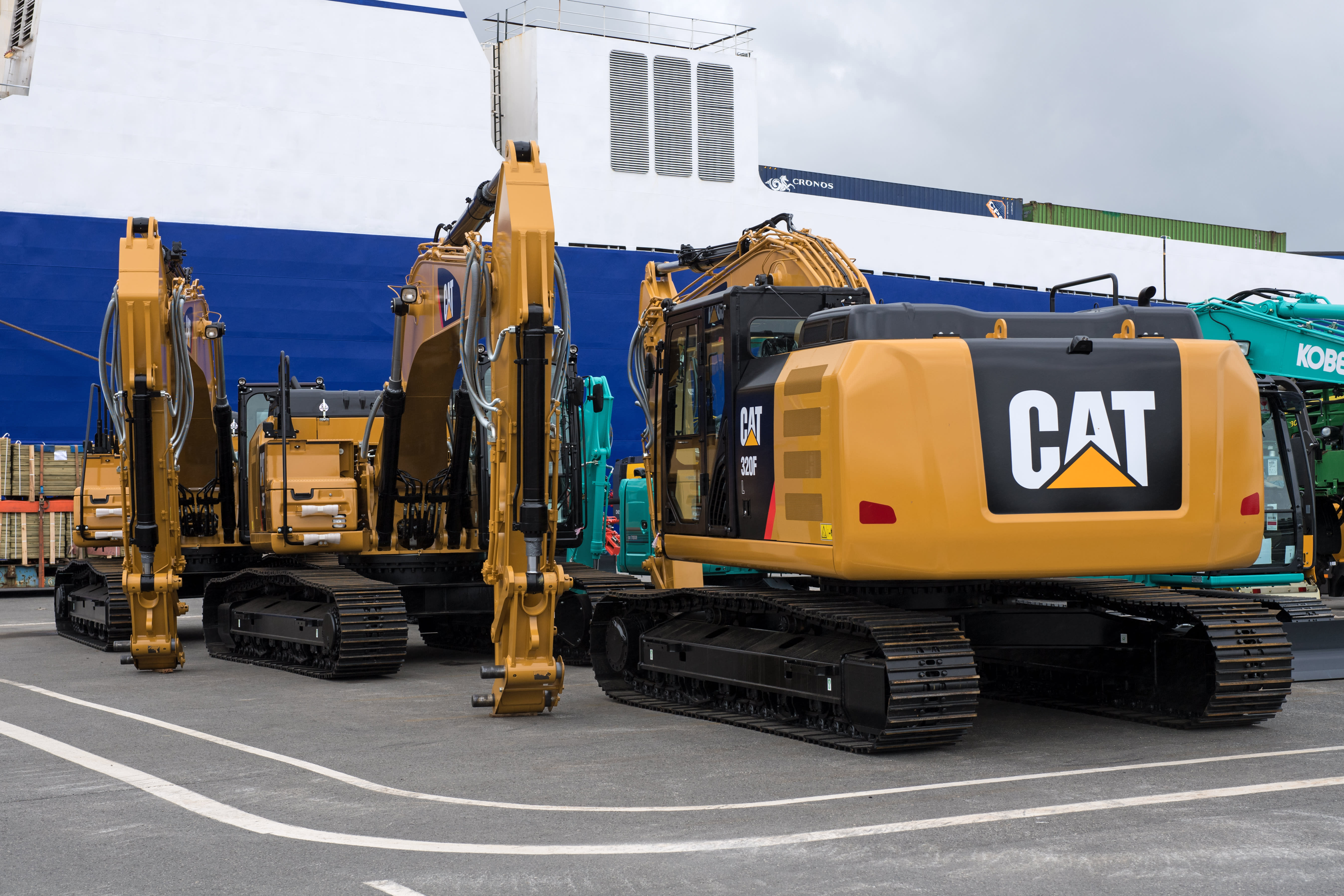 Construction machinery of the US producer Caterpillar can be seen at the BLG Logistics Group Car Terminal, ready for shipping in Bremerhaven, Germany, 12 June 2017. Photo: Ingo Wagner/dpa (Photo by Ingo Wagner/picture alliance via Getty Images)Ingo Wagner | picture alliance | Getty ImagesCheck out the companies making headlines in midday trading:Caterpillar, Deere — Shares of Caterpillar and Deere fell 1.4% and 2.1%, respectively, after an analyst at Wells Fargo downgraded them to market perform from outperform. The analyst said Caterpillar’s upside from these levels will likely be “limited” while expectations around Deere’s ability to reduce costs are “elevated.”SmileDirectClub – Shares of the online dentistry company dropped 19% as the company publicly listed on Thursday, opening trading at $20.55 a share. Priced to list at $23 a share, SmileDirectClub is on track to have the worst market debut this year of a “unicorn” company (meaning it is worth over $1 billion). The company priced the IPO above it’s expected range of $19 to $22.Aurora Cannabis – Shares of cannabis company Aurora Cannabis tanked nearly 9% after reporting disappointing fourth quarter earnings and weak guidance. The company reported revenue of CA $98.9 million, compared to analysts’ expectations of CA$108.3 million, according to Refinitiv. GAAP earnings per share was 0 cents per share, which is unlikely to be comparable to estimates.Oracle – Shares of computer software company Oracle cratered more than 5% on news that the company’s CEO Marc Hurd would be taking a leave of absence for medical reasons. The company also missed on its quarterly revenue. It reported revenue of $9.22 billion, while Wall Street expected $9.29 billion, according to Refinitiv. Earnings per share came in line with estimates at 81 cents.Activision Blizzard – Nomura raised its rating of the gaming company to buy from neutral, with shares climbing about 1% after the upgrade. Nomura cited several drivers from Activision Blizzard for the upgrade, including the better than expected launch of World of Warcraft Classic and new features of hit game Overwatch.Oxford Industries – The apparel maker’s stock dropped 9.5% after Oxford Industries missed expectations on its second quarter earnings. Oxford Industries lowered its expected full year earnings to account for the impact of tariffs, to a range of $4.25 a share to $4.45 a share from its previous range of $4.45 a share to $4.65 a share.Yelp – Shares of Yelp rose 4% after the Wall Street Journal reported that Groupon may be looking to acquire Yelp. The report, citing people familiar with the plans, said Yelp may yield $1 billion in earnings, as well as $200 million in synergies; although some Groupon shareholders are reportedly concerned about Yelp’s recent performance.DXC Technology – The information technology company’s stock dropped 14.9% after it announced the retirement of CEO Mike Lawrie. Several analysts downgraded DXC’s shares, according to FactSet, with firms expecting a new CEO will delay and slow the company’s growth plan.AT&T – The telecommunications giant’s stock dropped 1% as the company warned that it will see lower revenues from wireless equipment due to persistent low rates of upgrades.– CNBC’s Maggie Fitzgerald and Fred Imbert contributed to this report.

Billionaires should be taxed out of existence, says Thomas Piketty
UAW leader charged with embezzling union funds amid contract talks in Detroit
To Top
error: Content is protected !!
Top