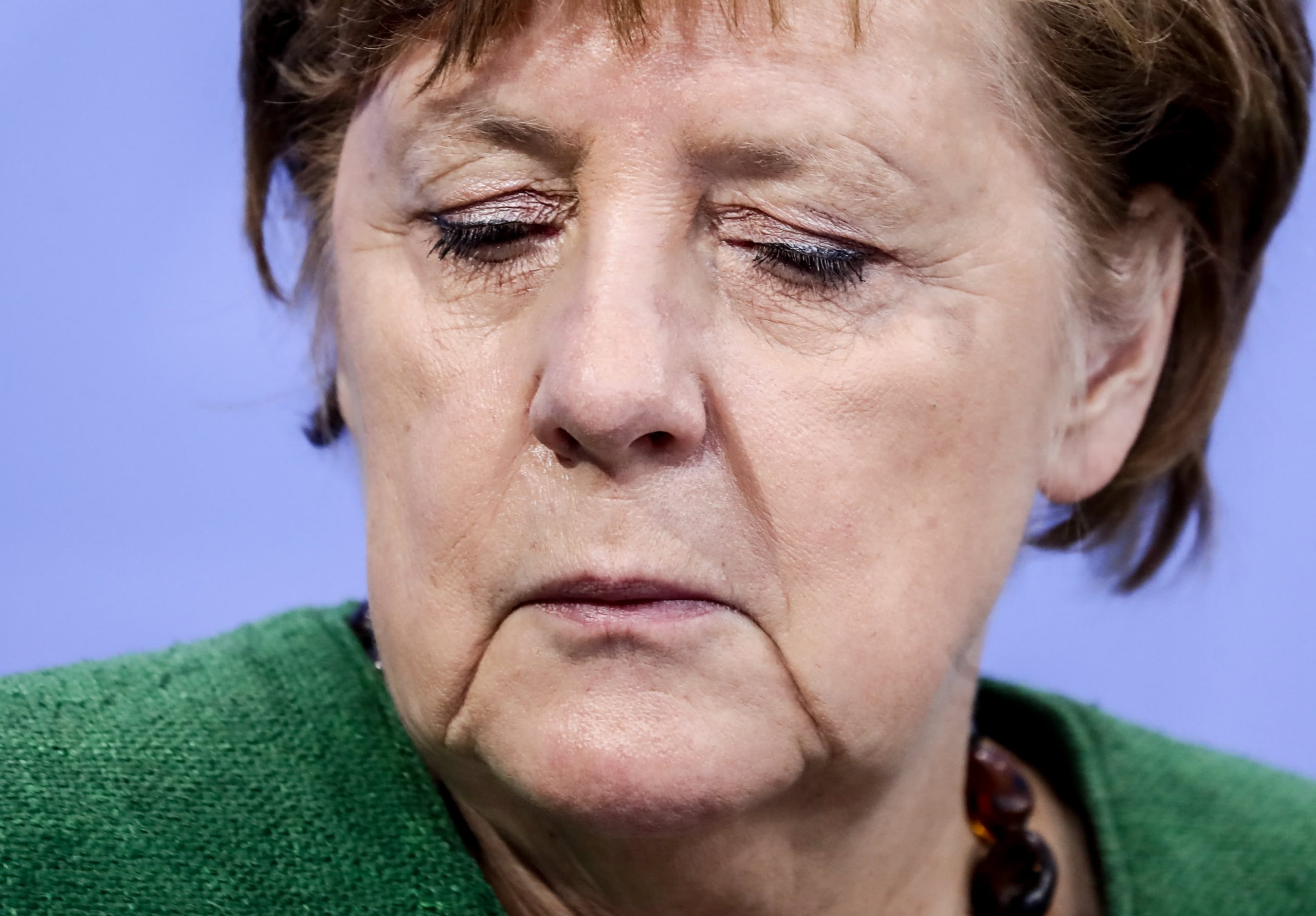 German Chancellor Angela Merkel attends a news conference after discussions via video with the heads of federal governments on the vaccination strategy at the Federal Chancellery, on March 23, 2021 in Berlin, Germany.Pool | Getty Images News | Getty ImagesLONDON — A third wave of the coronavirus pandemic has heaped more political problems onto Chancellor Angela Merkel and her ruling CDU party as the country edges closer to federal elections later this year.Germany was initially widely praised for its handling of the coronavirus pandemic, dealing deftly with the initial outbreak in the country by isolating cases and tracing contacts while its modern and well-equipped hospitals helped to keep fatalities low.A year on, and the situation is very different, with Europe’s biggest economy confronting a third wave of infections, a rising death toll and accusations of health crisis mismanagement aimed at the government.On Wednesday, Merkel made waves by reversing a plan to lockdown the country over the Easter break saying she had made a “mistake.” This came after criticism from health experts and business leaders, who said the proposal could cause more harm than good.The concession comes as experts reflect on Germany’s handling of the pandemic, and look at how the ruling Christian Democratic Union-Christian Social Union parties could be affected when Germans cast their votes in a federal election in September.Merkel’s CDU party has already fared poorly in recent state elections, signaling that it could be punished again later in the year by voters erring toward the center-left Social Democrats and particularly, the environmentalist Greens, whose support has risen markedly.”Mismanagement hurts,” Holger Schmieding, chief economist at Berenberg Bank, commented in a note Thursday.”Last March, a deft response to the pandemic sent support for Chancellor Angela Merkel and her CDU/CSU almost into the stratosphere.” But he added that while Germany handled the first wave of the pandemic better than most other developed countries, “this is no longer the case.””Confusing policy shifts and slow vaccination progress have now undermined public confidence in the ability of the CDU/CSU, which has led the government for most of post-war history including the past 15 years, to steer Germany through the crisis,” he noted.Schmieding noted that a kickback scandal involving CDU-CSU members of Parliament had resonated with the public, with polls showing a fall in support for the CDU-CSU back to pre-pandemic levels. “Merkel’s U-turn away from an ‘Easter shutdown’ may add to the woes,” he added.What’s going wrong?A drop in popularity for the CDU and its Bavarian sister party, the CSU, comes as question marks remain over who will be at the helm of Germany’s government come September when Merkel’s final term in office comes to an end. The CDU-CSU have not yet said which candidate it will put forward for the election.Merkel’s U-turn on Wednesday was unusual given that she has long been considered a steady hand during times of crisis. The move showed that the German government is also feeling the pressure of having to make difficult decisions amid a fast-moving pandemic situation.Following the U-turn on Wednesday, Merkel rejected demands by the opposition to ask Parliament for a vote of confidence in her government.Germany has now recorded over 2.7 million cases and 75,498 deaths, to date, according to Johns Hopkins University data, far lower than the U.K.’s This compares with the U.K.’s 4.3 million cases and over 126,621 deaths.The country had started to ease lockdown measures recently, allowing schools to reopen in February and some nonessential shops to admit customers again earlier this month. Like other European nations, it was banking on the rollout of coronavirus vaccines to enable it to slowly reopen its economy, the largest in Europe.Germany is not alone in having to adjust its plans; Italy is to reimpose a national lockdown over the Easter period for the second-year running while Paris and other parts of France are again under a partial lockdown.Public tolerance of renewed lockdowns might be higher were vaccine rollouts going to plan in the EU. But, as a whole, immunization programs across the bloc reveal a checkered rate of vaccinations.EU leaders met virtually on Thursday to discuss whether to block vaccine exports from the EU, as other countries like the U.K race ahead with their programs. Earlier on Thursday, Merkel defended the EU’s strategy to procure vaccines as a bloc, rather than individually.”Now that we see even small differences in the distribution of vaccines cause big discussions, I would not like to imagine if some member states had vaccines and others did not. That would shake the internal market to its core,” she told German lawmakers ahead of the EU summit, Reuters reported.She also suggested the region’s vaccination issues were more to do with lower production capacity rather than under-ordering shots.”British production sites are manufacturing for Britain and the United States is not exporting, so we are reliant on what we can make in Europe,” she said. “We have to assume that the virus, with its mutations, may be occupying us for a long time to come so the question goes far beyond this year,” she added.