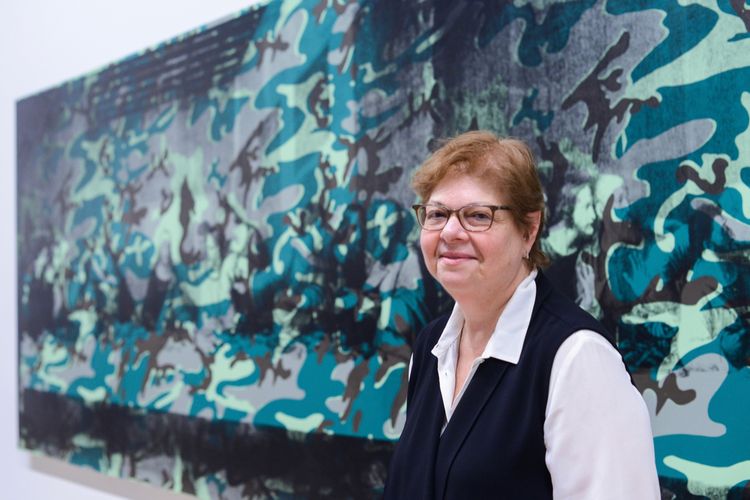 
Donna De Salvo at the exhibition Andy Warhol–From A to B and Back Again at the Whitney Museum of American Art
© 2019 The Andy Warhol Foundation for the Visual Arts, Inc./ Licensed by Artists Rights Society (ARS), New York; Photo: Matthew Carasella Photography


Donna De Salvo, who has organised some of the Whitney Museum of American Art’s most influential exhibitions, is stepping down as deputy director for international initiatives and senior curator effective 1 July, the museum has announced.

The Whitney said that De Salvo was resigning to “pursue other interests”. The announcement detailed the curator’s pathbreaking role at the museum, including curating the recent blockbuster Andy Warhol­­–From A to B and Back Again, which opened at the Whitney last November and is currently on view at the San Francisco Museum of Modern Art. The exhibition made the case that Warhol’s early and late work was as transformative as his signature Pop silkscreen portraits, helping to bring his 1950s commercial illustrations and 1980s camouflage paintings to the fore.

The museum said that De Salvo would continue to oversee the Warhol show as a consulting curator for the duration of its tour, which also includes a stop at the Art Institute of Chicago this fall. Among the other shows that she has organised at the Whitney are America Is Hard to See, the inaugural exhibition marking the museum’s move to its new building in New York’s meatpacking district in 2015; retrospectives devoted to Lawrence Weiner (2007-08) and Hélio Oiticica (2017); and Open Plan exhibitions featuring the work Steve McQueen and Michael Heizer in 2015.

“I hold a deep regard for the Whitney, which has been my home for one of the most fulfilling periods of my career,” De Salvo said in a statement. “I joined the Whitney to work with [the director] Adam Weinberg and his team, to imagine and help realise a new home for the museum, and to expand understanding of what art in the United States is and can be. It has been an enormous privilege to collaborate with extraordinary artists, trustees, and colleagues and to have overseen the curatorial direction of the Whitney during one of the most transformative periods of the institution’s history.”

Weinberg praised De Salvo for exhibitions “that bear the stamp of her unique take on art and culture”, major works acquired “under her inspired stewardship of the collection” and “artist-centric galleries”.

De Salvo joined the Whitney in 2004 and served as its first chief curator and deputy director for programmes from 2006 to 2015 before assuming her current role. Previously she worked for five years as a senior curator at the Tate Modern in London, where she organised shows including Open Systems: Rethinking Art c. 1970 (2005) and Giorgio Morandi (2002). From 1981 to 1986 she was a curator at the Dia Art Foundation in New York, where she forged bonds with artists including John Chamberlain, Donald Judd, Cy Twombly and Warhol.

She was also an adjunct curator at the Andy Warhol Museum and in 2005 helped curate an exhibition of paintings by Ed Ruscha for the US pavilion at the Venice Biennale.

An avid lecturer holding forth on her enthusiasms for Modern and contemporary artists, De Salvo was a tireless promoter of the Whitney’s shows, a frequent participant in international juries and review panels and an influential art-world voice.

In an interview last fall about the Warhol retrospective, she described the artist as a kind of progenitor of social media culture and evanescent fame. “I do think that there’s something within Warhol’s work which has a dark side, and also says something about aspects of the United States, our love of capitalism, our love of consumerism,” she said. “You can be consuming all kinds of things. It doesn’t have to be products. It can also be information that’s fed to us.” She added, “So, I believe the work remains extremely relevant, and now we’ll test out what that relevance really means.”