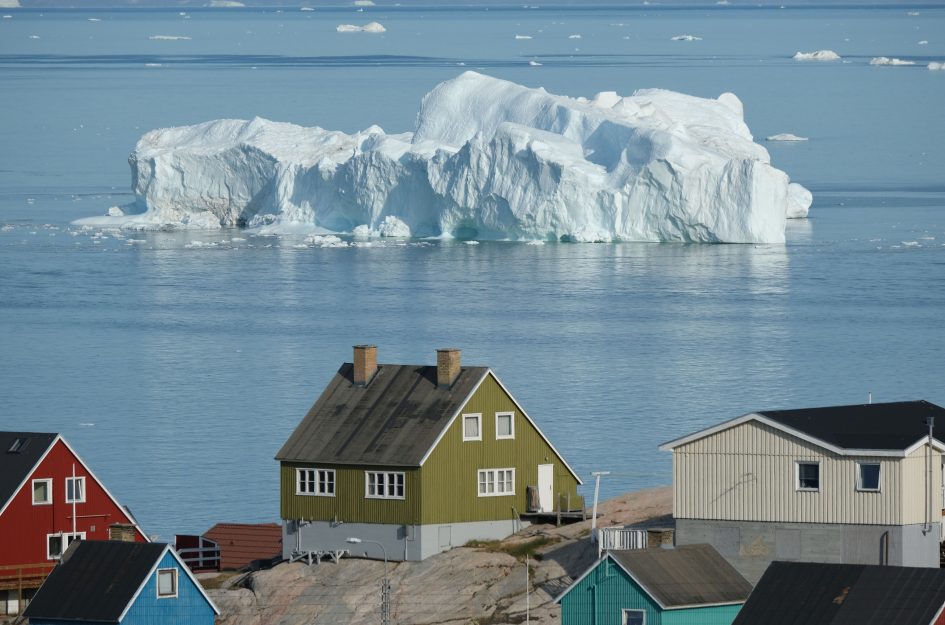 An iceberg floats in Disko Bay behind houses during unseasonably warm weather on July 30, 2019 in Ilulissat, Greenland. Climate change is having a profound effect in Greenland, where over the last several decades summers have become longer and the rate that glaciers and the Greenland ice cap are retreating has accelerated.

The historic heatwave that scorched Europe last week has moved to Greenland, where it’s expected on Thursday to melt away 12 billion tons of water from the ice sheet and irreversibly raise sea levels across the world.

The heat is causing one of the largest melt events ever for Greenland, following a record event in 2012 where 97% of the ice sheet experienced melting. This week, over 60% of Greenland’s surface was melting, according to computer model simulations, with temperatures over 25 to 30 degrees Fahrenheit higher than normal.

The higher frequency of extreme melt events has serious consequences for coastal communities across the world, climatologists warn.

“What we’re seeing in Greenland is exceptional. It’s a wake up call,” Penn State climatologist Luke Trusel said. “What we do now is critically important.”

While that measurement may seem small, this week’s melt is not an isolated event. Climate models estimate a sharp increase in frequent extreme weather events and longer periods of above average temperatures across Greenland. So, several hundred isolated weather events stacked up over the next 30 years, for instance, translates to multiples inches of sea level rise across the globe.

“The fact that we are getting measurable sea level rise out of a single day of melt is shocking,” said meteorologist Eric Holthaus. “There are real and lasting consequences from this single heat wave that will last for thousands of years.”

“You can’t undo these melt events,” said Brian Brettschneider, a climatologist at the University of Alaska Fairbanks’ International Arctic Research Center. “The only way is to freeze it, and that’s just not possible given the trajectory we’re on.”

Global sea levels will rise 2 to 6 feet by 2100 on the current trajectory, according to satellite data. However, given that greenhouse gas emissions are rising and global warming is accelerating at an unprecedented pace, scientists argue that the current projections underestimate sea level rise.

Greenland’s ice sheet melt has serious consequences for coastal communities, as sea level rise threatens to displace almost 200 million people by the end of the century.

Coastal residents represent 40% of total the total U.S. population, and $7.9 trillion in gross domestic product, according to the National Oceanic and Atmospheric Administration.

“The measurable amount of sea level rise just from this one event in Greenland translates into lower property value on every coastal city in the world,” said Holthaus.

“We could be getting into a world not too far from now when these major sea level rise events start impacting global markets,” he added. “Instead of Fed decisions, people will respond as well to major Greenland melt this summer, which will flood out a bunch of properties. It’s lost money.”

Credit rating agencies are beginning to take note of the risk. Last week, ratings agency Moody’s bought a climate data firm in order to assess climate change risks on the creditworthiness of governments and cities across the globe.

“It doesn’t take much water rise to encroach shorelines and damage homes, businesses and other properties. In the short term, you can armor the coastline with sea walls and barriers, but those are short-term fixes that come with a large price tag,” Brettschneider said.

The risk hasn’t resonated nearly as much with the real estate business in the U.S. On Tuesday, a study by research group Climate Central found that coastal communities in the U.S. have built nearly 20,000 homes in past decade in areas at risk from flooding by 2050.

“We control how much greenhouse gases we put in atmosphere,” said Sarah Das, a scientist at the Woods Hole Oceanographic Institution. “If we can slow down emissions, we can slow down sea level rise.”