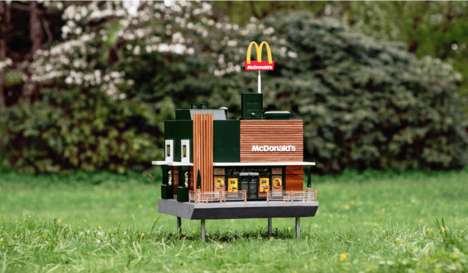 The world’s smallest McDonald’s is an impressive creation that is intended to both delight consumers, while simultaneously raising awareness about the issue of the declining bee population. The initative has been executed in collaboration with design agency NORD DDB and it highlights the fast food establishment’s commitment to sustainability.

The project was inspired by McDonald’s branches in Sweden where beehives were being installed on the roof. Playfully dubbed ‘McHive,’ the miniature structure is conceived by award-winning set designer Nicklas Nission and it is, without a doubt, the world’s smallest McDonald’s. In addition, the creator paid great attention to detail and outfitted his creation with a McDrive and restaurant seating.

The McHive was auctioned off on May 21st and it raised $10,000 USD for Ronald McDonald house charities.