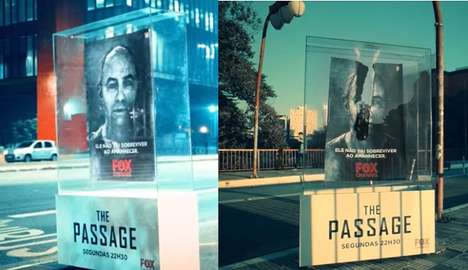 Fox Launches a Thematic Promotional Campaign for ‘The Passage’

Fox’s upcoming bloodthirst-inspired TV series — ‘The Passage,’ is being promoted in the streets of São Paulo with vampire posters “that burst into flames under sunlight.” The marketing approach here is, without a doubt, extremely creative and perfectly in unison with the vampire theme.

The campaign for ‘The Passage’ is curated in collaboration with creative agency BETC/Havas. Numerous transparent boxes were deployed in the city, each containing a vampire poster. In the night time, the street billboards behave normally, however, once sunlight makes contact with the paper, the contents of the box slowly begin to burn. This effect has been reached through coating the visuals in a mixture of potassium permanganate, sulfuric acid and “a special paint.” The dramatic effect effortlessly ties into the undead’s deficiency when it comes to sunlight.