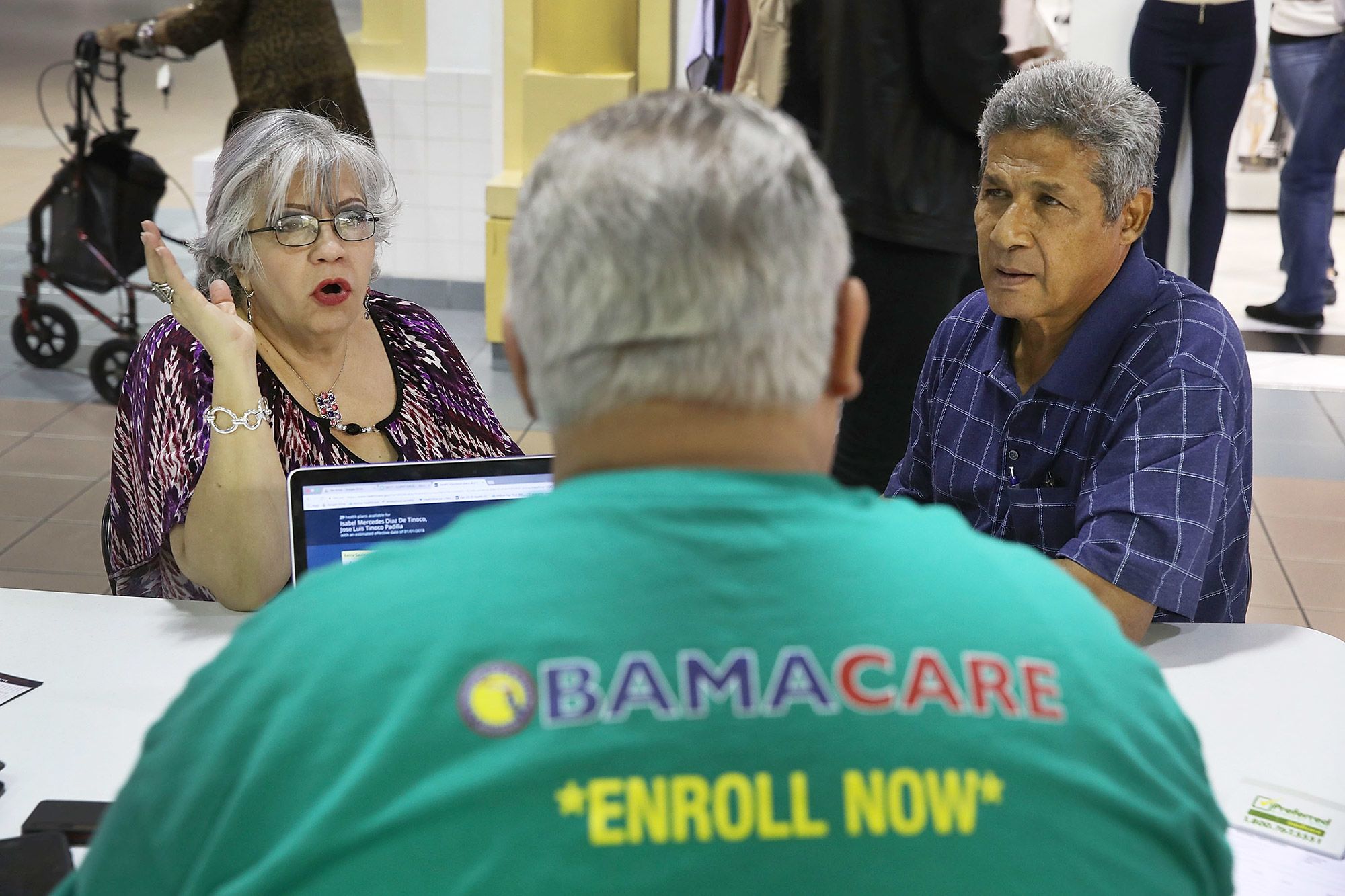 Isabel Diaz Tinoco (L) and Jose Luis Tinoco speak with Otto Hernandez, an insurance agent from Sunshine Life and Health Advisors, as they shop for insurance under the Affordable Care Act at a store setup in the Mall of Americas on November 1, 2017 in Miami, Florida.

If the lawsuit succeeds and the courts decide to repeal the Affordable Care Act, also known as Obamacare, millions of Americans could lose their health care if a replacement plan is not established. Though Trump wanted to replace the law with a new Republican plan before the 2020 elections, the GOP refused to bring forward its own proposal until it wins a majority in the House of Representatives.

The Department of Justice on Wednesday asked the U.S. Court of Appeals for the 5th Circuit to overturn Obamacare after a federal judge in Texas ruled the law unconstitutional, citing the removal of a tax penalty levied against citizens without health insurance. The Trump administration reduced the tax penalty, called the individual mandate, to $0 in the 2017 Tax Cuts and Jobs Act.

Though Obamacare remains law while it awaits deliberation in the courts, about 25 million Americans may be left uninsured if the law is struck down in its entirety.

Here’s who is at risk of losing their health insurance if Obamacare is repealed:

Approximately 11.4 million Americans enrolled or re-enrolled in an Obamacare exchange plan in 2019.

Obamacare established public marketplaces for individuals and families to shop for insurance plans that are compliant with ACA regulations. The exchanges also let citizens see if they qualify for federal subsidies that can help reduce health care costs.

But those exchanges would likely cease to exist if Obamacare is repealed, according to Cori Uccello, a senior health fellow at the American Academy of Actuaries.

“If the entire law has to go, then what is an exchange?” asked Uccello.

Uccello said she is not sure what would happen to the state exchanges, but people who got their plans on the federal marketplace would almost certainly lose their coverage. States could potentially step in and fund their own exchanges, according to Ben Sommers, professor of health policy and economics at Harvard University, “but that’s not a straightforward process,” he said.

Medicaid enrollment increased by 16 million people since Obamacare went into effect, with 13.6 million of those people living in Medicaid expansion states.

Obamacare expanded Medicaid eligibility to cover adults at or below 138% of the federal poverty level. Medicaid was also expanded to make uninsured children and many people with mental illnesses eligible for coverage. Thirty-six states and D.C. have adopted Medicaid expansion and 14 states have not.

As of now, the federal government pays 90% of the cost in states that have expanded Medicaid, but if Obamacare is repealed, states would no longer receive that funding. Sommers said states don’t have the resources to continue Medicaid expansion without federal funds, which could cause the people now insured through expanded eligibility to lose their coverage.

Experts say the health-care system will likely revert to the way it was before Obamacare was enacted and that popular provisions under the law, including protections for people with preexisting conditions and a rule allowing young adults to stay on their parents’ insurance until age 26, would end.

“The quality of coverage people are getting could go down quite a bit,” Sommers said.

Uccello said a full repeal of the law could cause the number of uninsured Americans to spike because it would allow insurance companies to deny coverage for people with preexisting conditions or charge higher premiums, making it difficult for many to afford coverage.

The 8.9 million people who get federal subsidies through their Obamacare plans would also stop receiving funds, making it more difficult for them to afford their premiums.

Another problem with repealing the whole law, Sommers said, is that there is “really no portion of the health-care system that isn’t impacted” by Obamacare, which means overturning the whole law without a replacement proposal could create “chaos and confusion” in the system.

“There is nothing simple about this,” Uccello said.