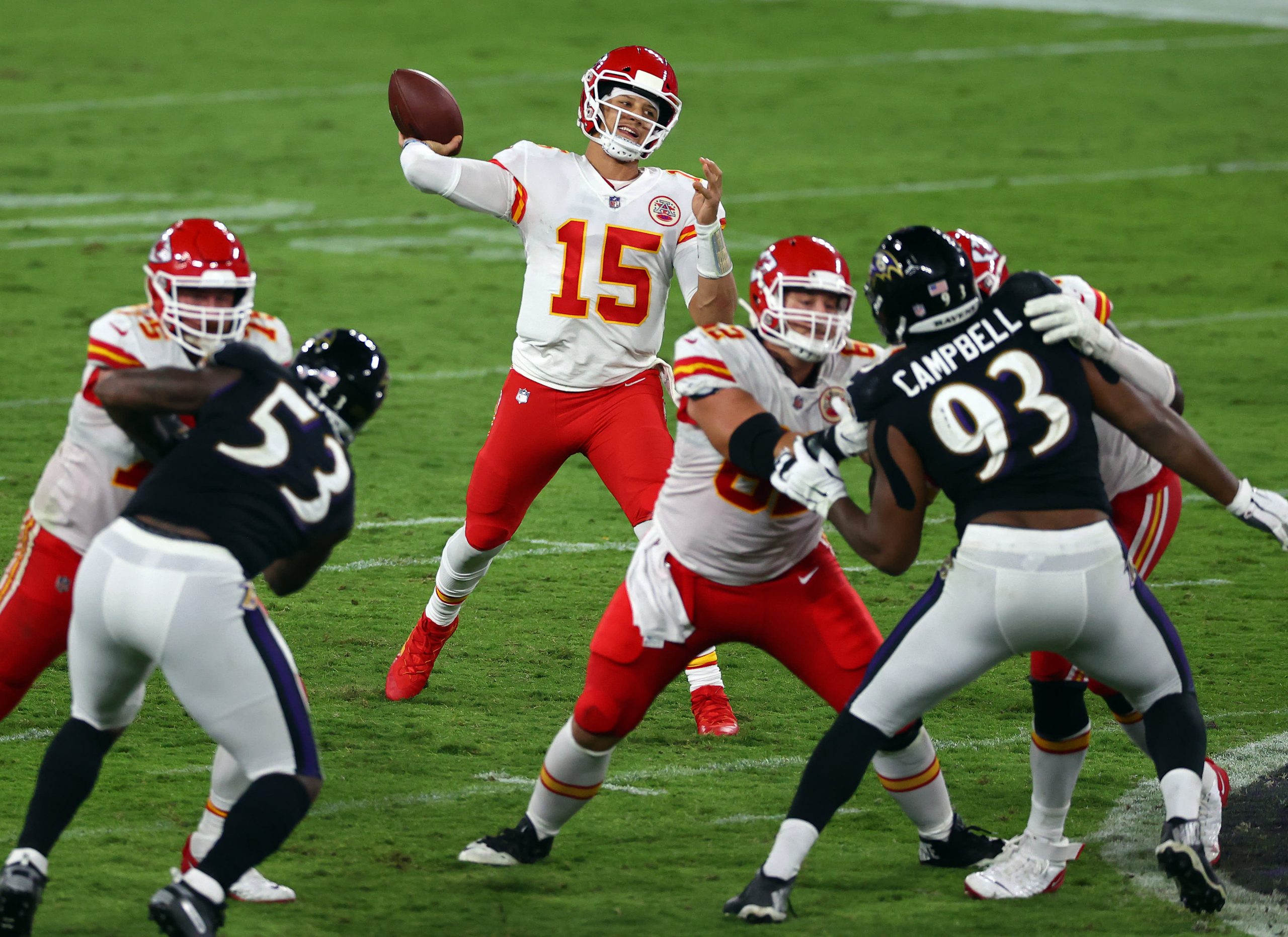 Patrick Mahomes #15 of the Kansas City Chiefs makes a pass during the game against the Baltimore Ravens at M&T Bank Stadium on September 28, 2020 in Baltimore, Maryland.Todd Olszewski | Getty ImagesSports tech company Hyperice landed its final major partnership of 2020, striking a deal with the National Football League, the company announced Tuesday. The company says the agreement will help it reach a $1 billion valuation by next year.The sponsorship deal with the NFL is a multi-year pact that will make the company the league’s first “recovery technology partner.” Hyperice, which makes equipment that helps muscles recover, will provide in-game recovery devices to NFL teams and players and have a presence at the league’s annual scouting combine in Indianapolis.Terms of the deal were not provided.In an interview with CNBC on Monday, Hyperice CEO Jim Huether said the agreement with the NFL helps “position us long-term as the [technology recovery] category leader and gives us accessibility to elite athletes and the ability to create more brand awareness and exposure.””The NFL mark is a powerful and important mark, and we have the ability to utilize the mark in brand campaigns,” he added, noting the TV exposure of players using devices on the sidelines would help brand exposure and company sales.Hyperice specializes in performance recovery products, including its massage devices that target soft tissue pain and muscle recovery for athletes. In October, the firm raised $48 million in a Series A funding round, which Huether told CNBC puts Hyperice at a $700 million valuation.Huether called the NFL agreement “a natural alignment because the NFL has an equity investment interest,” he noted.Other investors in the company include the Kansas City Chiefs star quarterback Patrick Mahomes, the National Basketball Association, Major League Baseball, PGA Tour and UFC.”We’re thrilled to welcome Hyperice to the NFL family as an Official Recovery Technology Partner,” said Renie Anderson, NFL CRO and executive vice president of partnerships, in a statement. “With this partnership in place, Hyperice products will be available across all 32 Club facilities providing our players access to the very best recovery technology to help them perform at the highest level.”For the NFL, in-game recovery products will include Hyperice’s “Hypervolt” massage device and its “Venom” products. These wearable devices combine heat vibration for shoulders, legs and back areas.NFL teams will also have access to Hyperice’s array of products, including its Normatec’s compression system, which helps athletes with muscle tissue recovery before and after games.Hyperice will use funds from its $48 million Series A to enhance its its new bluetooth and artificial intelligence platform, HyperSmart app.Source: HypericeThe Hyperice sponsorship deal struck with the NBA in July includes the addition of Hypervolt massagers under each player’s seat during games.”For us, what was so different about these partnerships in the in-game tech integration,” Huether told CNBC on Monday. “I feel like we reinvented and unlocked a new model for sports tech marketing partnerships in that we have a product that does optimize in-game performance. If you elevate performance in a game, you’re going to have better player performance.”Hyperice launched its new product, the “Hypervolt Go” ($199), a smaller, portable version of its Hypervolt massager, which costs roughly $330.”It’s a little bit more accessible and affordable to everyone,” said Huether, adding the company is coming off its biggest month of sales on October and expects to double that in December.He said Hyperice expects to hit a $1 billion valuation “sometime in the next couple of months.” Huether said the company wouldn’t seek another funding round as it’s profitable and said it could pursue an IPO.”All options are available,” Huether said. “We could do an IPO, acquire more companies or stay private and continue to expand our technology. It’s open for us right now.”

Doctors say CDC should warn people the side effects from Covid vaccine shots won’t be ‘a walk in the park’
Nikola shares fall after CEO fails to reassure investors GM won’t pull out of $2 billion deal
To Top
error: Content is protected !!
Top