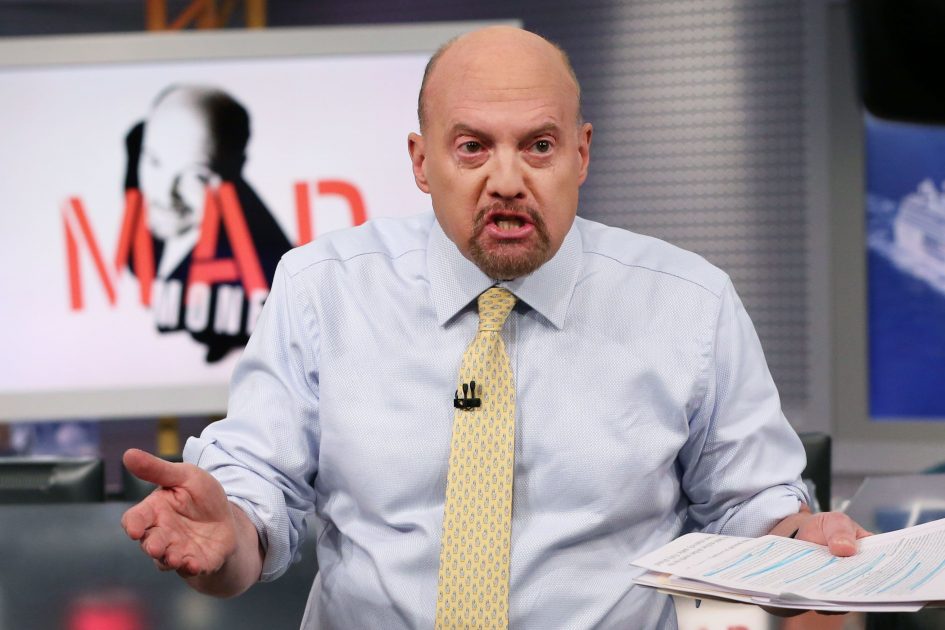 CNBC’s Jim Cramer said Monday that he would be a buyer of Lululemon shares at current levels.

With the stock trading just shy of $180, a “Mad Money” viewer, who bought shares at about $179 before its most recent quarterly report, phoned the host to get his thoughts on the name after some analysts downgraded it from buy to hold.

“I’d like the stock to go to $200. They have had a series of unbelievable quarters. They have amazing management,” Cramer replied. “A downgrade? I got 100 stocks I’d downgrade before I would downgrade Lululemon.”

A man incarnating a ‘Toro de Fuego’ (bull of fire) chases people during the San Fermin Festival in Pamplona, Spain.

Investors are skeptical about the state of the market and which way it’s going, Cramer said — they’re the fuel that continues to drive the bull further.

After the major indexes gave up much of their gains from earlier in the day, Dow Jones Industrial Average finished up more than 117 points, the S&P 500 settled higher 0.77% and the Nasdaq Composite advanced 1.06%.

The host said the session is a “pretty good microcosm for how the whole year’s been going.”

“The market is full of skeptics. It’s full of bears who sometimes masquerade as bulls, and their doubt is the fuel that lets us go higher,” he explained to viewers. “Bull markets thrive on disbelief. The moment everyone believes in the bull, well the rally’s over, because then there’s no one left to buy.”

Monday kicked off the start of the end of the year.

Now that the calendar has turned past the halfway mark of 2019, Cramer reviewed the top five performers on both the Dow Jones Industrial Average and the broader S&P 500 indexes and projected where those stocks are headed.

“When I look at the top five best performers in the Dow and the S&P, I see a good group of stocks, most of which have more room to run. As we’ve seen over and over this year, stocks that are in motion tend to stay in motion,” he said. “Maybe they get knocked down by big-picture worries, but if you’ve got a high quality story … the odds are good the stocks going to get right back on track.”

Find out the top performers here

Julie Wainwright (C), CEO of The RealReal Inc. takes part in the company’s IPO at the Nasdaq MarketSite in New York, June 28, 2019.

Cramer viewers the green light to buy into The RealReal, the online luxury consignment shop that made its public debut last week.

He called it an “intriguing growth story with some hair on it,” but suggests waiting for the stock price to recede a few bucks.

“At a time when the department stores are being eaten alive, The RealReal could be poised to make a killing,” the host said. “Right now, it’s at $26 and change. You’ve got my blessing to buy it if it pulls back to $22.50 or less. And if it doesn’t, you gotta just say you missed it.”

Cramer said payroll processing companies can give a good read on the job market. Paychex, the second-largest business in the sector, has seen its stock bouncing after delivering an earnings report that did not impress investors last week.

“That’s what’s been growing the fastest,” he said in a one-on-one interview. “Double digit growth, even without Oasis, the acquisition that we completed … we did have double digit growth and we think we’ll continue to have that in our client employees.”

Cramer’s lightning round: Why own Intel when you can own AMD?

In Cramer’s lightning round, the “Mad Money” host zips through his thoughts about viewers’ stock picks of the day.

Xilinx: “I say [sell, sell]. Own half of it, at least. Look, there’s conflicting reports about what the story with Huawei is. This company makes space station for China and therefore I think it may not be part of the amnesty, so I don’t want to get too out of control.”

AeroVironment: “The bears have been winning on this one. I have to tell you that there’s a big move against these defense stocks, too. … We got to stay away.”

Intel: “Why own Intel when you can own AMD? That’s the one I’d by.”