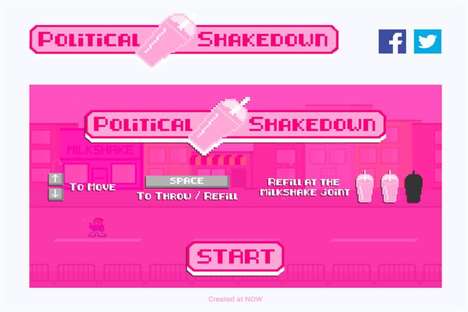 The Political Shakedown Game Encourages Standing Up to Hate

Launched by ad agency NOW, the Political Shakedown game is an 8-bit browser-based game inspired by a recent incident in England in which a protester threw a milkshake at one particular pro-Brexit politician known for his divisive rhetoric.

The game, highlighting the throwing of milkshakes at individuals who many argue propagate messages of hate in politics, is described by NOW creative director Laura Muse as an opportunity to spread the positive message of the Stop Hate UK organization and a reminder of the importance of standing up to hate in all its forms. The Political Shakedown game was created by Muse, developer Paul Blackburn, and designer Jordan Dicks of the NOW agency and production company Jelly London.