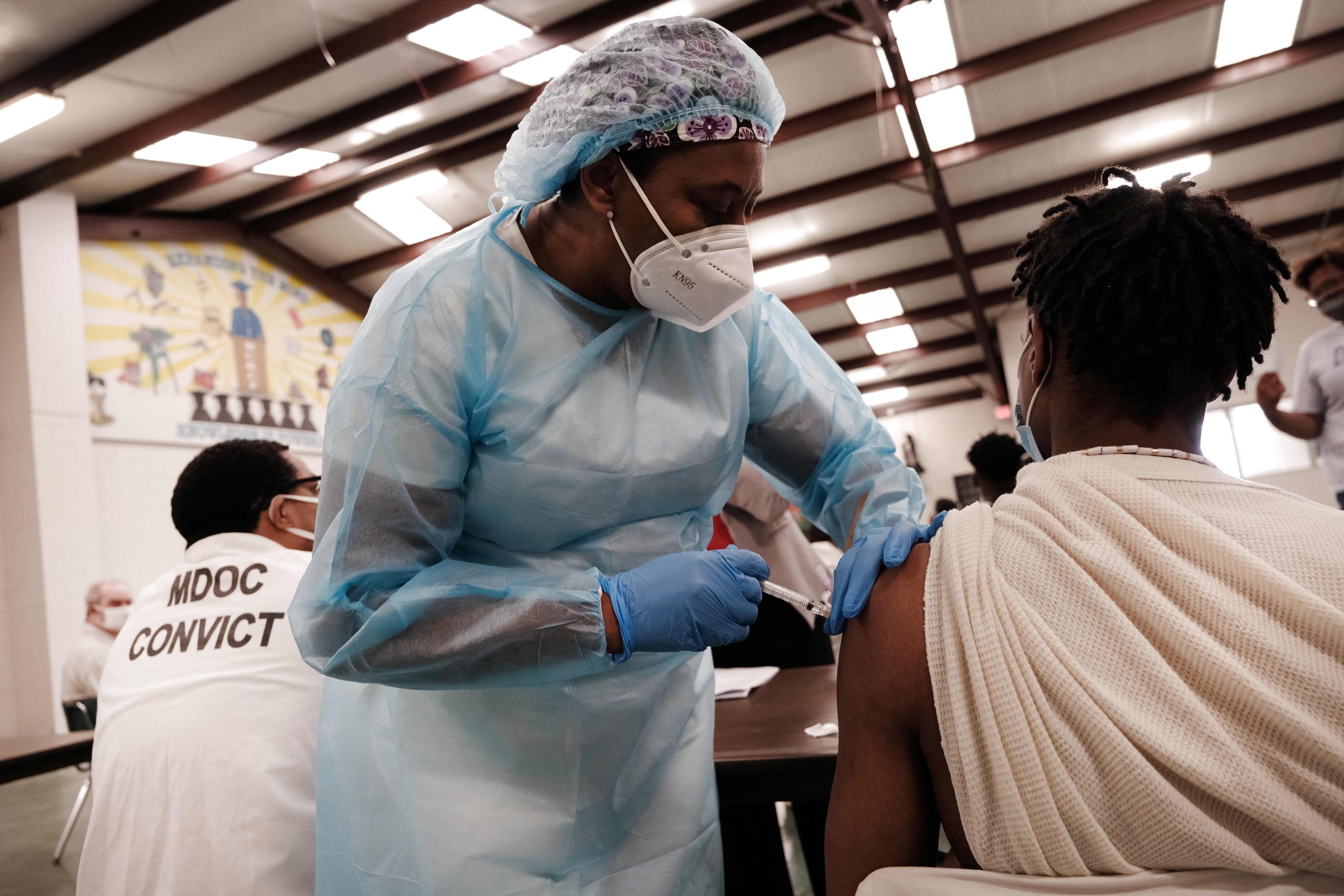 A prisoner at the Bolivar County Correctional Facility receives a Covid-19 vaccination administered by medical workers with Delta Health Center on April 28, 2021 in Cleveland, Mississippi.Spencer Platt | Getty ImagesMississippi Gov. Tate Reeves pleaded Friday with residents to get vaccinated as the state scrambles to hire hundreds of temporary doctors, nurses and EMTs.He’s also requested ventilators from the Strategic National Stockpile as the spread of the delta variant fills hospitals in the state with mostly unvaccinated patients. The state even asked federal officials to send a medical U.S. Navy ship but was turned down, he said.”When you look across the country, to a certain extent, this current wave is the pandemic of the unvaccinated,” Reeves said at a press conference, adding that the state was headed toward a new peak of the Covid-19 pandemic. “We continue to see more and more data, and the data is becoming more and more clear. Those who received the vaccine are significantly less likely to contract the virus.”For the few breakthrough cases in fully vaccinated people the state has seen so far, “they’re much less likely to spread the virus and it is highly unlikely that if you have the vaccine that you end up in the hospital or that you end up in an ICU bed,” he said.Mississippi extended a state-of-emergency order on Thursday that was set to expire this week after the state hit a record of more than 5,000 new Covid cases in one day, said Reeves, a Republican. The spike in cases will likely be followed by an increase in hospitalizations and deaths.The state requested 65 physicians, 920 nurses, 41 nursing aides, 59 advanced practice nurses, 34 physician assistants, 239 respiratory technicians and 20 EMTs, according to Reeves. The extra help would open up 771 medical surgery beds and 235 ICU beds, he said.About 97% of people currently hospitalized for Covid in the state are unvaccinated, a trend seen throughout the country. This week, Mississippi’s daily hospitalization rate reached numbers higher than any the state has seen throughout the pandemic.In the last four days, “we’ve lost four healthy people in their 20s, two of whom were pregnant, zero vaccinated,” Mississippi state health officer Dr. Thomas Dobbs said during the briefing. “In the past four days, we’ve lost 10 people in their 30s, and these aren’t people who are chronically ill cancer patients.” None in their 30s who died were vaccinated.In other age groups, the number of deaths in unvaccinated people continued to overwhelmingly eclipse the number of deaths in vaccinated people.”I mean, there’s a pattern here … by and large the vaccines have been incredibly protective and helpful and especially for people who are under 50,” Dobbs said.The state has one of the lowest vaccination rates per capita in the United States, but daily vaccination rates have tripled over the past month amid the spread of the dominant delta variant, according to state health officials.The governor said he has no intention of mandating masks or vaccines for state employees “or for anyone else” and emphasized that he believes those things are personal choices.”I have no intention based upon the data that I have seen of issuing a statewide mask mandate,” Reeves said in a press briefing on Friday.Reeves said he does not plan to impose mask mandates on schools either, saying that school districts “have every right” to encourage mask use if they deem it necessary.More than 5,000 children are currently quarantining after positive cases were detected in just the first couple of weeks of schools reopening, some without mask mandates.In total, Mississippi has recorded 381,147 Covid cases and 7,761 deaths since the beginning of the pandemic, according to the Mississippi State Department of Health.