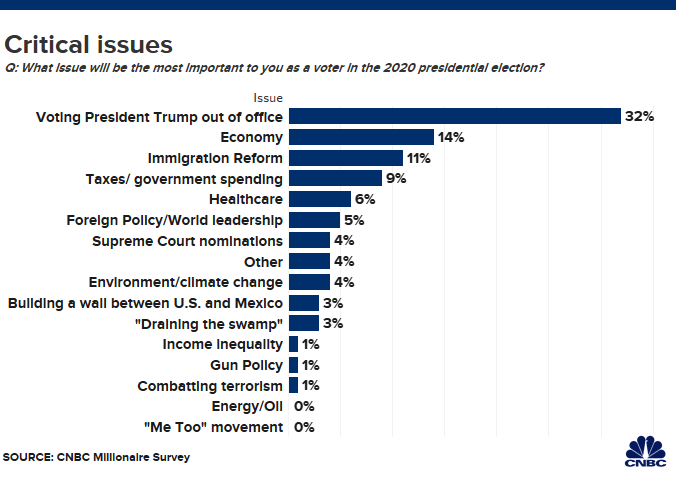 A majority of millionaires support Sen. Elizabeth Warren’s proposed tax on large wealth, according to a new survey.

Fully 60% of millionaires support Warren’s plan for taxing the wealth of those who have more than $50 million in assets, according to the CNBC Millionaire survey. The wealth tax is different from an income tax, since it taxes a family’s total holdings every year rather than their income.

Polls show that a majority of Americans also back a wealth tax. But the support from millionaires, some of whom would presumably pay the tax, shows that some millionaires are willing to accept higher taxes amidst growing concern over inequality and soaring fortunes of the rich.

While 88% of Democrats support the wealth tax, 62% of independents support it along with 36% of Republicans. Even the upper tier of millionaires, those worth more than $5 million, support a wealth tax, with two-thirds in favor.

Warren’s proposal calls for a tax of 2% on wealth over $50 million and 3% on wealth over $1 billion. The presidential candidate estimates it would apply only to 75,000 of the richest families and would raise $275 billion a year.

A larger number of millionaires also support an income tax rate of 70% on those making more than $10 million – a suggestion floated by Democratic Rep. Alexandria Ocasio-Cortez. And a majority support repealing the 2017 tax cuts on companies.

“Over the years, we have seen that this population is willing to pay more,” said George Walper, president of Spectrem Group, which conducted the study with CNBC. The survey polled 750 people with investible assets of $1 million or more. Of the respondents, 261 were Republicans, 261 were independent and 218 were Democrats.

Millionaires do want to preserve one form of tax savings – deductions. Fully 72% oppose eliminating all deductions, which include the mortgage deduction and charitable deduction. They also strongly oppose taxing unrealized capital gains, a proposal made by Sen. Ron Wyden, D-Ore.

Hackers stole unreleased Radiohead music, asked for $150,000 ransom
Since 2009, when S&P passes 50-day moving average, stocks do this next
To Top
error: Content is protected !!
Top