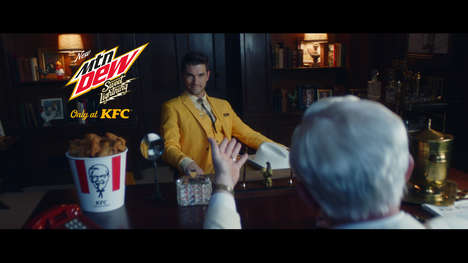 A new co-branding campaign has surfaced from a collaboration between MTN DEW and KFC. The two companies have joined forces to debut the refreshing Sweet Lightning drink which is characterized by notes of peach and honey.

Ahead of the beverage’s launch — this is scheduled for July 1st, MTN DEW and KFC facilitate a narrative-driven co-branding campaign which introduces a new character. Appropriately dubbed ‘Sweet Lightning,’ the mascot is a dapper-looking fellow in a yellow suit which effortlessly ties to the aesthetic of the new drink. The plot follows the newly introduced character — “MTN DEW’s new pitchman,” as he interacts with KFC’s Colonel and lands a job.

This approach to a co-branding campaign draws value from the fascination with the fictitious and borders strongly on entertainment.