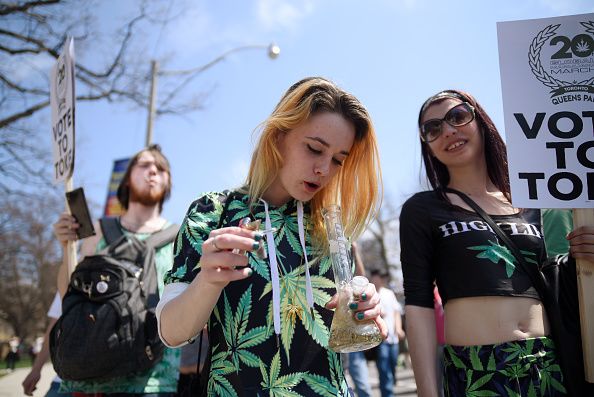 Teens smoking up Marijuana with a bong.

Legalizing pot does not appear to encourage teen use and might actually discourage it, a study published Monday in JAMA Pediatrics suggests.

Researchers analyzed data from more than 1.4 million high school students between 1993 and 2017, collected by the Centers for Disease Control and Prevention for its Youth Risk Behavior survey. The results show teen pot use both before and after medical marijuana laws were adopted in 27 states, seven of which also legalized recreational marijuana during the survey period.

Teen marijuana use didn’t change much after medical marijuana was legalized, they found. In states that legalized recreational use, the number of teens who said they smoked pot in the previous 30 days dropped 8% while the number who used it 10 or more times fell by 9%.

One theory floated by the study’s authors was that teens may find it more difficult to access marijuana if drug dealers are replaced by licensed dispensaries that require proof of age, possibly contributing to the decrease.

Eleven states and the District of Columbia have now legalized recreational use of marijuana, while 34 states permit medical use. Some worry normalizing pot will give young people the impression that marijuana is harmless. Plus, they worry that selling pot at dispensaries will make it easy for young people to access the drug.

The study estimates an association between legalization and teen use, not causation, meaning the study does not show conclusively that legalizing pot causes a decrease in teen use. Still, the findings are consistent with similar research that suggests teens might smoke less pot in states where medical or recreational marijuana is legal.

Though generally aligned with Republicans, the Koch brothers have split with the party on marijuana and some other issues. The powerful libertarian donors support states legalizing pot and criticize federal attempts to thwart local laws.